A Partnership at Risk 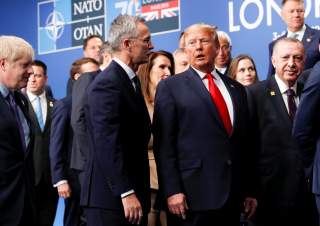 IT IS no secret that the transatlantic partnership is at risk. Admittedly, this condition may seem neither new nor unusual. Ever since the United States assumed, on behalf of the West, a leadership it had earned the old-fashioned way—one war at a time—its main European partners have questioned its goals, methods, and even its values. Similarly, ever since the states of postwar Europe began their mutation into a European Union (EU), their ultimate goals, singular methods, and even some of their values have been cause for concern or occasional hostility, not just ambivalence, in the United States—one president and one issue at a time.

Yet, for both the United States and the states of Europe, the crisis is different this time—certainly critical, difficult to contain, and possibly existential.

The difference can be explained in many ways. For one, the crisis is unusually complete, as it combines a full range of overlapping strategic, economic, and political issues that involve the EU and NATO as well as each of their thirty-five members. These issues transcend the personalities of their leaders or the specificities of any one state’s policy. Even absent Donald Trump, Brexit settled, and Vladimir Putin gone, the EU and NATO, the two main institutional pillars of the transatlantic partnership, would face a consequential agenda: engaging Russia, managing the Greater Middle East, responding to China, controlling the spread of nuclear weapons, ending the wars of 9/11, sustaining a rules-based commercial order, addressing the urgency of climate change, sharing the impact of a growing migrant crisis, regulating the cyber anarchy, digging out of massive imbalances, and more. These highly complex issues are the known knowns of the post-war, post-secular, and post-national agendas of the decade ahead. For many of these issues, the long term is running out of time. This is a time for more unity, not less—if not now, when? As Angela Merkel poignantly reminded Harvard’s new graduates in May 2019, “Anything that seems set in stone or inalterable can indeed change,” whether for better or for worse.

In short, on both sides of the Atlantic, this is an hour of maximum danger. That is what this moment is all about—a shared risk that it might turn into an era of irreversible ruptures.

A SINGULAR dimension of the moment is also the fact that a principal Western driver of history’s U-turn is the president of the United States, now facing a protracted campaign for re-election. A short year before his blind date with our future, the only outcome known for sure is that the election will be pivotal—arguably no less than in 1948 with Truman’s unexpected victory or in 1980 with Carter’s expected defeat. It’s the voters, stupid: since 1992, the election has been won against the pundits’ logical favorite and the prevailing poll du jour: Bill Clinton over Bush H.W. Bush, George W. Bush over Al Gore, Barack Obama over Hillary Clinton (for the Democratic nomination), and Donald Trump over Clinton.

But, even while awaiting the people’s final verdict, this is not the moment for a time out. During this electoral year, it will be the allies’ turn to lead from behind. Doing so will require adhering to three basic principles.

First, don’t indulge but don’t provoke. The Trump narrative about the world is four-dimensional: The world took advantage—enough! The elite misled—down! The Deep State rules—out! Take America back—first again! However primitive the narrative may be, it sells well—and not only in the United States, where it seems to work even better when openly confrontational and explicitly personal. Make no mistake: expect no growth from Trump in 2020, only regression. As he makes foreign policy the continuation of electoral politics by other means, no one can tell what looms ahead: more tariff war with China, but also with Europe and others perhaps; a flawed deal with the like of North Korea; a real war with the like of Iran; or whatever else might seem politically expedient, however strategically incoherent or dangerous.

In such a period, it will be best for the states of Europe to avoid confrontation: don’t indulge but don’t provoke a U.S. president who finds in any slight an offense, any offense a provocation, and any provocation an opportunity for a provocative rebuke. Thus, after Brexit, the best way to respond to Trump’s anti-EU strategy is to let it self-destruct, one failed deal and disruptive tweet at a time. The improbable promise of a bilateral trade agreement with Britain on the quick is one example, with its predictably disappointing, and even humiliating, one-way terms, the likely congressional stall prior to a hypothetical ratification, and even the tweeted afterthoughts. Trump’s self-serving inconsistency on the way to a deal does not end after the deal has been signed, which is why signing once the talking ends is not always the best option.

Second, think small and go short. Whether Trump ever really mastered “the art of the deal” can be argued one bankruptcy at a time. But however that argument goes, what was mastered, if anything, is the “big” deal. Ignored are the small deals which diplomacy requires for a balanced and durable agreement. For there, in the realm of les grandes affaires, the pursuit of an everything-for-everything, now-or-never deal is a non-starter—as shown with the lack of progress in pursuing North Korea’s denuclearization, or Iran’s non-nuclearization, “the best deal of the century” in the Middle East, and so forth.

And yet, even while some of these crises threaten to erupt into proverbial “October surprises,” the European allies can help stay the course to avoid dangerous dead ends while the electoral clock runs out. The role varies—mediator, umpire, point guard, pivot, or just bench player—but however Europe plays it, it can be quite effective: “deconflictionary” when matters threaten to get out of hand, and “representational” when America’s absence threatens to leave the West out. Remember the Anglo-French role in Georgia in the fall of 2008, or the EU Big Three’s role to launch U.S.-Iranian negotiations a few years later and, more recently, the French attempt to re-start a dialogue with Iran pending broader talks later. Going short and thinking small is to find and share a way—one issue at a time, one step at a time, during a year of great geopolitical turbulence—towards a compromise.

Third, step up and dig out. No strategic black hole is deeper, wider, and darker than the Middle East. As the subtle geopolitical thinker and baseball-great Yogi Berra would have said, the region is now half about the Arab-Israeli conflict, half about Arab-Arab conflicts, and the remaining half about great and small power conflicts. That leaves plenty of room for everyone to meddle and do harm.

For many years, and preceding Trump, the road to a two-state solution has been closed for major repair amidst growing doubts about U.S. reliability as an honest broker. The resulting vacuum surprisingly restores Europe’s position as a main Western rampart against the unwanted ascendancy of self-styled superpowers like Russia, the destructive incompetence of regional bullies like Saudi Arabia, the dangerous provocations of revolutionary powers like Iran, and even, of late, the ineffective assertiveness of newly revisionist powers like Turkey. That the United States is not doing well should not be an alibi for the states of Europe to do less: lacking the will to assert itself as a power in the Middle East and bring it the diplomacy it has been lacking in recent years, the risk for Europe is that regional instabilities will continue to spill over dangerously across the Mediterranean.

IN 2016, Trump’s candidacy was severely underestimated, thereby enabling one of the least suited candidates for the U.S. presidency ever to defeat one of the best prepared ever. At the present moment though, nearly every available indicator points to a one-term limit for the Trump presidency, notwithstanding a statistically robust economy. Assuming the time to be half past Trump, what can be expected next?

Throughout the Cold War and since, every U.S. president has been introduced in opposition to his predecessor. In most cases, there was no new beginning, however, and the expected changes remained short of what had been announced. With Trump making his predecessor the anti-model he did not want to be or become, there has been seemingly little of that past continuity. And yet, don’t expect wholesale changes from a new administration. Many of Trump’s priorities are likely to endure past his time—getting tough on China, being more demanding on trade, pursuing negotiations with North Korea, saying “no” to a nuclear Iran, seeking a deal over Ukraine as part of a détente with Putin’s Russia, including a new nuclear balance à trois with China, and so forth.

Admittedly, it is premature to anticipate how that legacy will be handled specifically, pending more clarity on Trump’s successor. But it is not too early to assume that a key priority of the next U.S. administration will be to restore the credibility of its alliance relationships with a transatlantic relance that should respond to three broad strategic guidelines.