Partnerships with Corrupt Regimes Are Not in the National Interest 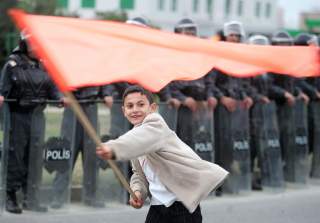 Azerbaijan is a former Soviet republic with a mostly secular Muslim population, oil and gas reserves, and a notoriously corrupt government. Bordering Russia, Turkey and Iran, it is poised at the doorstep of the Middle East, and is of strategic interest to the United States. How to craft and pursue a policy that balances U.S. strategic interests with Azerbaijan’s steadily worsening record on human rights and democracy has challenged policymakers and diplomats for the twenty-five years of Azerbaijan’s post-Soviet independence. The time has come, despite global trends to the contrary, for the United States to give greater weight to human rights and democratization in its policy toward Azerbaijan.

U.S. policy debates on Azerbaijan are a microcosm of the struggles and trade-offs of American foreign policy. The United States does partner with repressive regimes, a frequently uncomfortable choice that is readily justified when greater strategic imperatives—energy security, defense, military advantage—are at stake. At the same time, U.S. policy elites in and out of government articulate the values of the founders holding up ideals of equality, democracy, and rule of law. American diplomats privately explain that in dealing with dictators, they might “work behind the scenes” to advance human rights even while signing agreements for weapons sales in front of the cameras.

When it comes to Azerbaijan, U.S. policy has been a compromise, resting on a so-called tripod of security, energy, and democracy/human rights, almost always named in that order. Over time, U.S. administrations and diplomats on the ground have adjusted the weight on the legs of this tripod.

Although the time may seem ripe for a defense of U.S. partnership with authoritarian regimes given the apparent downgrading of human rights concerns in the present administration, such an approach is contrary to the national interest. Geopolitical considerations support transactional relations not whitewashing repression, not downplaying corruption. Recently the Heritage Foundation’s Luke Coffey claimed that Azerbaijan is a “good partner” for the United States. He argued that greater emphasis on human rights would create a “lopsided” foreign policy, but the reverse is actually true.

In the American tripod of policies in Azerbaijan, human rights/democracy has been the short leg and stressing it would bring U.S. policy into balance. Greater U.S. promotion of democracy fits the urgent need to offset the sharply growing intolerance and repressive regimes around the world. Moreover, Azerbaijan has shifted toward Russia with arms deals and complex regional agreements like the North-South Transit Corridor, making the capital Baku a hub for Russian-Iranian trade. Meanwhile, Baku consistently rejects democratic policies, thus narrowing the opening for partnership with the West.

The reality of Azerbaijan under Ilham Aliyev since 2003 (and his predecessor-father Heydar since 1993) is that democratic process has been destroyed although democratic forms have been preserved. Corruption has proliferated and encompasses the ruling family and oligarchs who run government. Repressions of civil society have become more vigorous and brutal.

No presidential or parliamentary election since 1993 has been deemed “free and fair” by OSCE/ODIHR election monitors. The Panama Papers and the 2017 exposé on the Azerbaijani Laundromat document the Aliyev regime’s money laundering, shell corporations and bribery. Domestically, these oligarchs control most of the energy, construction, transportation, tourism and communications industries of Azerbaijan as well as airports, gold fields and food processing facilities. Internationally, the Aliyev regime’s money laundering network is linked to Russian oligarchs and Russian companies. The prominent billionaire father-son team that financed the 2013 Miss Universe Competition in Moscow is in fact Azerbaijani—Araz and Emin Agalarov. At the time, Emin was married to Ilham Aliyev’s daughter Leyla and their young sons constitute an enduring bond between the families. The chance that Azerbaijan under Aliyev will be an “honest broker” in U.S.-Russian relations, as Coffey suggests, is zero.

Journalists and bloggers as well as human rights and pro-democracy activists are harassed, beaten, arrested, jailed and sometimes murdered without investigation or repercussions. Although journalist and editor Mehman Aliyev (no relation to the president’s family) was released after being held on fabricated charges, over ninety journalists, bloggers and other human rights defenders remain in jail.

Azerbaijan’s reputation, at the same time, has been artificially bolstered by lavish spending on a wide array of gifts and high-priced lobbying firms in Western capitals. Baku’s “caviar diplomacy” was named in a 2012 report by the European Stability Initiative. The regime’s use of lobbyists in Washington was uncovered in a series of findings from the Congressional Ethics Office investigation of lawmakers’ travel to Azerbaijan to Till Bruckner’s “How to Build Yourself a Stealth Lobbyist.”

The anti-democratic nature of Azerbaijan’s government cannot be ignored. While no one would suggest sacrificing energy and defense, promotion of democracy and human rights must also be recognized as U.S. strategic interests. Diplomats will admit that the impact of prioritizing human rights in repressive regimes may be “marginal,” but thousands or millions of lives can be improved in the margins.

Failure to defend democratic values is a strategic risk. The argument that the United States is selective and cynical in its defense of democracy makes a powerful recruiting tool for ISIS and other extremists around the world. The Kremlin’s global media arm RT has become adept in muddying the waters around U.S. values and actions. The RT pitch goes something like this: The United States talks about democracy and human rights, but has violations of its own from election “irregularities” to Ferguson. Russia, too, has a democracy with some shortcomings (Azerbaijan here chimes in with an energetic “so do we!”). There’s no real difference—we have different types of democracy.

The RT argument, repeated by Baku, is persuasive because it highlights real flaws in the United States and it’s simple. The real picture is complex and not part of RT’s non-stop barrage—that democracy is not a state of being but a dynamic process. Its preservation and the defense of human rights are a struggle of interests. That struggle is mediated through freedoms of speech, media, and assembly and at times by the courts which, in a real democracy are independent from ruling circles.

Pro-democracy activists in Azerbaijan and other authoritarian states look to the West and especially to the United States to support their efforts when they stand on the front line of the fight against dictators at great personal risk. Few things are more demoralizing to human rights defenders and investigative journalists than seeing a U.S. ambassador laud the one hundred troops Baku sent to Afghanistan but ignore the one hundred political prisoners in Azerbaijani jails. And if the present regime gives way to democratic opponents, will the next regime consider the United States a friend? Perhaps the most dramatic example of such a turn-about was in the Iranian Revolution. For decades, the United States supported a corrupt and decadent shah who repressed and murdered his critics. When the ayatollahs overthrew him, his “great friend” the United States became their Great Satan. Azerbaijan is not Iran and the chances of anything like an Islamic revolution in this secular society are slim indeed. But the lesson to learn is that U.S. support for dictators has strategic significance. New choices today can improve future prospects.

Audrey Altstadt is a professor history at the University of Massachusetts Amherst and author of Frustrated Democracy in Post-Soviet Azerbaijan.

Image: An Azeri boy waves an orange flag in front of a riot police line during an opposition rally in Baku November 9, 2005. Opposition protesters angry about their defeat in Azerbaijan's parliamentary poll massed in Baku on Wednesday, calling on President Ilham Aliyev to step down. REUTERS/Sergei Karpukhin