Party Crasher Wanted: Why America Needs an Outsider to Change the Outcome of the Next Election 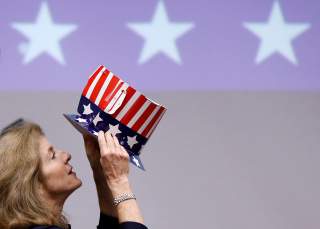 Heading into the 2016 presidential election, American voters were faced with the stark choice between two major party candidates that had historic negative ratings, forcing Americans to select the least bad option. Election 2020 is likely to again lead voters to choose the least offensive option, especially based on the extreme animosity generated during impeachment.

But the dynamics at play now, the rising level of dysfunction amid party politics, is hindering the U.S. government’s ability to get even basic things done. And things will likely get worse following the 2020 election if the status quo continues without challenge—making an independent run both increasingly conceivable and desperately needed.

Donald Trump was a disruptive figure in 2016 and won the GOP nomination, in large part, because he represented a break from the status quo Republican establishment that so many voters detested. Over the past three-plus years, he has engaged in a near-continuous battle with his political enemies, both real and perceived.

Part of Trump’s angst and anger can be understood. Trump was hounded and harassed by liberal politicians and media outlets for the better part of two years over the Mueller investigation. After many Democrat leaders promised salacious and devastating proof of Trump’s collusion with Russia, when Mueller ultimately laid his cards on the table, there was no smoking gun. He could not prove that Trump committed a crime, but also he did not exonerate him.

Democrats appeared to be livid that there was no proof of Russian collusion and some of them not-so-quietly seethed at the failure of such a long probe, as many had famously wanted to impeach Trump from the beginning. In the aftermath of the Mueller report, it seemed, they had lost their opportunity. But then, President Trump provided a new vehicle to remove him from office: the “perfect call” to Ukraine. The phone call was a coordinated effort by his associates to compel Ukrainian officials to investigate Trump’s political rival, Joe Biden.

Whether Trump’s actions rose to the level of impeachment is not so clear-cut as the Democrats claim, but despite what the president’s key Republican defenders argue, it was far from innocent or “perfect.”  Trump’s actions have the unquestioned appearance of impropriety that he used his office for personal political benefit.

Short of any genuinely smoking gun new evidence, Trump will be acquitted by the GOP-led Senate when a vote is finally taken, but that will only leave Trump’s accusers even more angry, bitter, and desperate for revenge.

After the acquittal, many Republicans, meanwhile, will also be in a fighting mood. If Trump is consistent in anything, its that he has never been satisfied at merely winning a fight; he wants revenge on the person who attacked him. The GOP, then, is likely to continue demonizing the entire Democratic Party and work against its members at every opportunity, attempting to deny them any legislative victory that might make them look like effective legislators ahead of the 2020 elections.

And the political gridlock in Washington will deepen. America’s critical needs will continue to go unaddressed. Its aging infrastructure won’t get fixed and will deteriorate further. The border will remain porous. The immigration system will stay broken. The healthcare system will continue its substandard performance. The national debt will continue to threaten America’s future, etc.

Yet regardless of whether it’s Trump or a Democrat in 2020, there is virtually no chance that the dynamic changes, which is why a nonaligned candidate should be given the greatest consideration this November. A quality man or woman who owes no allegiance to either party will have profound advantages over either Trump or the Democratic nominee.

In other words, this man or woman could always seek the most effective policies that carry the greatest benefits for the country. It’s also worth pointing out that the nation’s highest office is designed—as its first occupant so eloquently demonstrated—to serve the people, not the person filling the office.

On April 16, 1789, George Washington wrote in his diary that he approached his inauguration, not with eagerness to wield power, but “with a mind oppressed with more anxious and painful sensations than I have words to express...with the best dispositions to render service to my country in obedience to its call.” In his inaugural address, he specified that he entered office with no “prejudices or attachments, no separate views” and, critically, no “party animosities.” His sole intent was to selflessly serve the country he loved to be the benefit of the people. That is what we need, desperately, in our next president.

If ever the country needed such a non-party affiliated individual to step forward, now is the time.

Daniel L. Davis retired from the U.S. Army in 2015 after twenty-one years of active service, including four combat deployments. The opinions shared in this article are those of the author alone and do not represent the views of any organization. Follow him @DanielLDavis1 on Twitter.