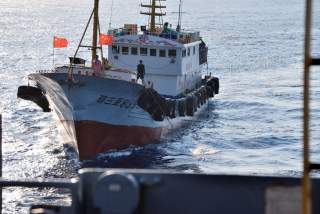 China’s Leninist leadership has rightly been termed the “high church of realpolitik.” Beijing’s leaders believe that even small changes in foreign leaders, correlation of forces, or the relative balance of power have important significance. If they appear in flux, China probes for opportunities. If meeting minimal or manageable resistance, it then pushes further to gain ground. Given the particular uncertainty concerning President-elect Donald Trump’s outlook and policies, and Beijing’s indignation at his statements already regarding both mainland China and Taiwan, he may even face probing without the typical “grace period” arguably accorded his predecessors. How Trump handles such pressure will reverberate across the Asia-Pacific and around the world.

In recent years, China has tested each new American president. The past two faced an early challenge: George W. Bush with increasingly aggressive aircraft intercepts that triggered the April 2001 EP-3 crisis, Barack Obama with the March 2009 Impeccable incident. China appears to engineer tensions or activities to assess a president’s position in an area of its interest and to attempt to alter his decision-making to Beijing’s preferences. While motivations are hard to prove, Trump and his team must certainly prepare for the possibility that at some point Beijing—having never “forgotten” whatever statements and actions may accumulate despite its objections—will push back in a manner that effectively poses a test.

If the past is any guide, Chinese leaders may test the new administration early on. While a trial could take many forms, the last two presidential tests revolved around U.S. surveillance operations in international airspace and waters, to which Beijing continually objects. Given current Sino-American friction points, one possible scenario involves the South China Sea, U.S. Navy vessels, and China’s Maritime Militia. Such a “Trump Test” could involve China’s maritime militia harassing the operations of U.S. warships or surveillance ships in hope that he could be pressured to reduce such activities, thereby accommodating Chinese sovereignty promotion efforts. It might include not only direct tests of U.S. resolve, but also that of America’s regional allies and partners and its commitment toward them; particularly given uncertainty over how the Trump Administration intends to handle longstanding alliances and partnerships. China may see this as an opportunity to weaken the alliance system, which it opposes vehemently. Here the East and South China Seas are equally likely arenas, with Japan, Vietnam, and Indonesia among the leading potential targets. Either way, the Obama Administration’s failure to publicly acknowledge the asymmetric challenge of China’s Maritime Militia on its watch contributes to a looming disconnect in which Beijing and Washington or one of its allies or partners may (eventually) be headed for a tense encounter or incident at sea, without sufficient preparations for its effective management.

Beijing’s broader South China Sea strategy includes advancing disputed claims where it can, delaying resolution of issues it cannot yet settle in its favor, and coercing potential opponents while limiting escalation. Beijing’s longstanding opposition to key principles of international air-and-sea-related law and its growing assertiveness in the South China Sea make it view ‘unapproved’ American activities there as contravening vital interests. To implement that strategy with as little American resistance as possible, and thereby further its unresolved land feature and maritime sovereignty claims without escalating to major power war, it is employing not one but three major sea forces.

China’s Maritime Militia is its Third Sea Force of “blue hulls,” after its Navy of “gray hulls” and Coast Guard of “white hulls.” Increasingly, these forces operate together, with blue hulls operating forward and white and gray hulls backstopping them. Collectively, these are “gray zone” operations: conducted to alter the status quo, and employing coercion as necessary, but without resorting to war.

China’s irregular sea force is one of the most important—yet most under-considered—factors affecting U.S. security interests in the South China Sea. These Chinese “Little Blue Men” are roughly equivalent at sea to Putin’s “Little Green Men” on land.

In a range of South China Sea scenarios, military-controlled Maritime Militia would likely play a frontline role. Here’s a scenario that Washington must be well prepared for, well in advance: In Jonathan Swift’s novel Gulliver’s Travels, the tiny but tenacious Lilliputians trap and truss the far larger protagonist Lemuel Gulliver on the shore of their small Pacific island. In broadly analogous fashion, Beijing might seek to confuse, disrupt, or stymie a U.S. destroyer or defenseless special mission ship like USNS Effective by dispatching Maritime Militia forces to harass or obstruct it.

This could play out in a particularly dangerous way for regional stability and American interests. Even if the Obama Administration is able to complete its tenure without a major incident, its successor may well face a fast-breaking Maritime Militia-related challenge all-too-soon after coming into office with one of the least conventionally-prepared-and-understood national security teams in modern memory. China’s 44 increasingly aggressive intercepts leading up to the EP-3 incident, which occurred 77 days into George W. Bush’s term, as well as its handling of the ensuing crisis, were intended to test his intentions and persuade him to adopt a more conciliatory approach to China. The Beijing-instigated Impeccable incident, beginning just 44 days after Obama’s inauguration, was part of a concerted Chinese effort to test his mettle and see if he could be pushed to reduce lawful U.S. surveillance and reconnaissance operations in international waters and airspace. It immediately followed a smaller-scale incident, in which a Chinese government vessel and aircraft repeatedly harassed USNS Victorious in international waters of the Yellow Sea. This timing suggests a concerted, national effort at making a point to the new president. Fortunately, Obama passed that test.

On October 27, 2015, however, when USS Lassen sailed near artificially augmented Subi Reef, small commercial craft with the hallmarks of Maritime Militia vessels approached it in apparently premeditated fashion. Who knows what contingencies they might have been practicing for, or what footage they might have recorded for future propaganda?

Leading elements of China’s Third Sea Force have already played frontline roles in manifold Chinese incidents and skirmishes with foreign maritime forces throughout the South China Sea. These include China’s:

• 1974 seizure of the western Paracels from Vietnam

• 2012 seizure of Scarborough Shoal from the Philippines, giving China a new operational model that it literally calls the “Scarborough Model”

• and 2014 repulsion of Vietnamese vessels from disputed waters surrounding its oil rig, including by ramming and sinking them.

In recent years, China has used its Maritime Militia against military and civilian ships and crews of its immediate neighbors and the United States—with no direct public response from any of them. There is an important reason for this lack of light on China’s Third Sea Force: despite a deluge of Chinese-language evidence of its development and activities, no U.S. government report or Washington-based executive branch official has publicly mentioned China’s Maritime Militia, at all. As a result, U.S. policy is under-informed, U.S. regional allies and partners are confused, and Beijing is emboldened.

But make no mistake. These are state-organized, -developed, and -controlled forces operating under a direct military chain of command. China’s most advanced Maritime Militia units—those entrusted with missions potentially requiring hazardous interaction with U.S. and other foreign forces—are in fact state actors reporting to, and directed by, China’s People’s Liberation Army (PLA) chain of command to conduct Chinese state-sponsored activities. Maritime Militia units have a military organizational structure. They are linked to the PLA (military) chain of command directly through People’s Armed Forces Departments (PAFDs), their direct managers for recruitment, planning, organization, training, and policy execution. At a “mandatory wicket” level, through which Maritime Militia communications and directives—such as mobilization and mission orders—must typically pass, PAFDs are staffed by active duty PLA personnel.

Official Chinese sources document unambiguously that leading Maritime Militia units are receiving military training directly from uniformed PLAN personnel while wearing their own Militia uniforms. Their vessels engage in exercises with PLAN and China Coast Guard vessels. To incentivize such risky state service, localities provide militia personnel with a “disability pension” of over $8,600 a year if they suffer harm in the line of duty—the same benefits other government employees receive. A knowledgeable individual has described to the author his experience aboard a Chinese Maritime Militia vessel. He observed major “T-bar” type reinforcements inside the hull, completely unnecessary for fishing but useful for ramming other vessels. Unlike on normal fishing vessels, with which the individual was intimately familiar, there was no sight or smell of anything fish-related. The personnel appeared extremely professional and specialized, with a military-style bearing quite different from that of normal fishermen.

Now China is generating a worrying new wave of the future in leading-edge Maritime Militia development. The Sansha Militia, headquartered on Woody Island in the Paracels, was established to be a professional paramilitary force first and foremost, with fishing a secondary mission at best. Sansha Maritime Militia members have been photographed loading crates labeled “light weapons” onto one of their newly delivered large vessels, several dozen of which boast water cannons, collision-absorbing rails, and reinforced hulls—features not common to normal fishing trawlers, but highly useful for aggressive spraying and ramming. Some ships reportedly have a “weapons and equipment room” and an “ammunition store.”