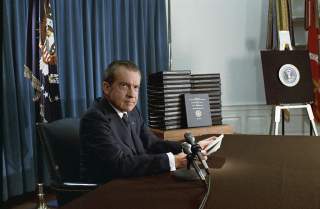 “I DID not understand then, nor do I now, why we did what we did,” writes Patrick J. Buchanan towards the end of Nixon’s White House Wars, the second of two volumes chronicling the decade he spent with the thirty-seventh president as a speechwriter, political adviser and confidant.

In this instance, Buchanan was referencing a tactical blunder committed during Watergate, the denouement of the Nixon presidency. But the author—a pugnacious visionary who believed conservatives could recast the electoral map by peeling off key constituencies of Franklin D. Roosevelt’s New Deal coalition—could just as easily have been summarizing Richard Nixon’s five and a half years in the Oval Office, which repeatedly found Buchanan baffled by the steady leftward drift of a president he knew to be instinctually conservative. “Why we were doing this,” the author complains ninety-three pages earlier, about something else, “I did not know.”

Time and again, as Nixon and his men deliberated the conduct of the Vietnam War and the threats posed by the radical Left, school desegregation and affirmative-action programs, Supreme Court nominations and Great Society funding, Buchanan struggled to understand why the Nixon he knew intimately from 1965 onward, the wily politician whose worldview aligned so squarely with the “Silent Majority” of Americans—a phrase Buchanan himself had coined—had embraced the policy prescriptions of his political opponents.

“Why did the conservatives, who had so influenced the policy positions that Nixon had adopted during his comeback, fail to play a comparable role in the transition and the administration?” Buchanan asks. At one point, he even plaintively wonders whether the president and his key aides—principally, Chief of Staff H. R. Haldeman and domestic policy adviser John Ehrlichman—entertained an “inherent suicidal tendency or death wish.”

This lamentation, exposing the inner workings of the “troubled marriage” between Richard Nixon and conservatism and drawing on a thousand memoranda Buchanan exchanged with the president, many previously unpublished, provides the chief value of Buchanan’s book. Witty and well documented, rich with insights into Nixon, the nation and a cast of colorful characters—from Henry Kissinger to Hunter S. Thompson, Ronald Reagan to Coretta Scott King—White House Wars succeeds simultaneously as history and autobiography, polemic and portraiture, elegy and entertainment. In this and the first installment of his Nixon memoirs, The Greatest Comeback, which chronicled Nixon’s wilderness years and capturing of the presidency in 1968, Buchanan has made an indispensable contribution to the literature of Cold War America.

BUCHANAN’S CONFLICT endures to this day. His dismay over Nixon’s liberal domestic policy is tempered by a reflexive impulse to defend the man, both because he had all the right enemies—virtually all of academia, the news media, and the civil- and foreign-service bureaucracies—and because Nixon was subjected, across three decades on the national stage, to an unrelenting double standard. (Case in point: the same New York Times that in 1962 denounced publication of Cuban Missile Crisis secrets, to preserve “the integrity of the National Security Council,” could, by 1971, when Nixon and Kissinger were running the NSC, spend three months grooming the Pentagon Papers for publication.) Thus, Buchanan today can praise Nixon’s “willingness to set aside political differences and past battles and cross party lines to select the best to serve the nation” while deploring the fact that “there was not an ideological conservative among Nixon’s West Wing assistants or Cabinet officers.”

The nadir of Buchanan’s disaffection was Nixon’s historic trip to China in February 1972. Traveling on Air Force One back from Shanghai, Buchanan read the communiqué drafted, on the U.S. side, by Kissinger, and instantly became “angry, disgusted, and ashamed.” “I was ill,” he writes, over the “sellout of Taiwan.” There in the aisle a shouting match ensued. “Bullshit!” Buchanan screamed at the national security adviser, as Brent Scowcroft looked on with a furtive grin and thumbs-up. Before landing, the fighting Irishman had resolved to resign. He got over it, but from time to time Buchanan’s frustrations boiled over in the five- and ten-thousand-word memos he would fire off to the president, the most pointed of which, drawing blood and anger from its audience of one, reached the president’s desk in December 1970:

Neither liberal nor conservative, neither fish nor fowl, the Nixon administration . . . is a hybrid, whose zigging and zagging has succeeded in winning the enthusiasm and loyalty of neither left nor right, but the suspicion and mistrust of both. . . . The president has abandoned many of the sustaining traditions of the Republican Party . . . swept these traditions aside with an ease and facility that must have astonished millions of Republicans who have held them as articles of faith for forty years.

“Brilliant analysis,” Nixon scrawled on the document, instructing circulation to senior staff, only to complain to Haldeman the following month: “The difficulty with the conservatives is that they have a totally hard-hearted attitude where human problems and any compassion is concerned.”

In the end, Buchanan concludes, Nixon failed to dismantle the Great Society “because no one of real influence in his domestic-policy circle pushed for it and his heart was not in it.” The president, Buchanan holds, was “seduced” by liberal adviser Daniel Patrick Moynihan—one of the cross-aisle staff picks Buchanan elsewhere extols—into believing that he could be “the American Disraeli who used Tory men to advance Whig measures.”

Wherever Nixon followed Buchanan’s advice, and confronted the Left head-on, Buchanan predictably reports, Nixon prospered. The three great instances of this were the televised “Silent Majority” speech of November 1969, which rallied popular support for the commander in chief’s Vietnam policy against the massive demonstrations of the antiwar movement; the unleashing of Vice President Spiro Agnew in Des Moines, that same month, to deliver an unprecedented and deeply resonant attack on media bias, largely scripted by Buchanan; and in the broad strategies employed against Democratic candidates during the 1972 reelection campaign, when Nixon scored a historic landslide by cultivating the very groups Buchanan identified as central to the creation of a New Majority: Northern Catholics, Southern Protestants, blue-collar ethnics.

THE PARALLELS with Donald Trump’s upset victory in 2016 are beyond superficial. “The name of the game is the white working class,” Buchanan wrote the president in 1972, prophetically. With the assistance of the Democrats themselves, who nominated the far-left George McGovern as their standard-bearer, Nixon “shattered the Roosevelt Coalition and created a New Majority that would give the Republican Party forty-state victories in four of five subsequent presidential elections, two of them forty-nine-state landslides.” Sean Spicer, Trump’s embattled press secretary, could surely benefit from studying the Agnew playbook against the news media. As Buchanan recounts,

We saw the media as a distorting lens. Our objective was not to censor or silence them. That was impossible. What we could do was raise doubts about their motivation, veracity, and wisdom, as they raised doubts about ours. What we could do was strip them of their pretensions to be selfless defenders of the common man, and identify them as what they were, “a small unelected elite” wielding its power to direct national policy toward its own ideological and political ends. . . . The networks never recovered from the Des Moines attack on their credibility, arrogance, bias, and elitism.

In reminding us of the antecedents to today’s political clashes, White House Wars also presents striking portraits of Buchanan’s colleagues in the Nixon White House. Rare are the books in which Ted Agnew comes off better than Henry Kissinger. Disgraced after resigning and pleading nolo contendere to tax evasion charges in October 1973—a product of his acceptance, in the vice presidential suite, of brown bags stuffed with cash—Agnew died in 1996 “a forgotten man,” as Buchanan writes. But he was, besides Buchanan, the only outspoken conservative in the Nixon White House, “a man with guts and humor” who “could deliver a speech better than anyone in the administration”—a warrior willing to challenge frontally the hypocrisies of the liberal hegemon with a fearlessness that President Nixon exhibited less frequently than Congressman Nixon. “Long before it was declared a ‘culture war,’” Buchanan notes, “Agnew was leading a counterrevolution, a counter-reformation, not to destroy the universities, the media, or the churches, but to expose what was happening to them while America slept.”

Kissinger, by contrast, is depicted as “a turf-conscious bureaucrat” driven by “lust for power and fame.” Surveying the shelf of elegant memoirs Kissinger has published, Buchanan marvels at the “often dreadful” and “pedestrian” prose the former Harvard professor employed when writing for the president, such that Nixon “again and again” asked Buchanan to rewrite it. Of Kissinger’s skill as a courtier, Buchanan notes that the man could sound in the Roosevelt Room like James Burnham, the conservative thinker who helped launch National Review, and like Joe Kraft, the liberal columnist, in the salons of Georgetown. And the temper! “I just watched Dr. Kissinger throw all the pages I gave him across the room, and there’s a two-star general crawling around on the floor picking them up,” Buchanan’s secretary Sally Brinckerhoff once reported. “How do you deal with a four-year-old genius?” asked Kissinger’s onetime deputy, Alexander Haig. Readers in search of a balanced portrait of Kissinger’s statesmanship should obviously look elsewhere, most notably Walter Isaacson’s Kissinger (1992) or the first volume of Niall Ferguson’s acclaimed authorized biography, Kissinger: Volume I: 1923-1968: The Idealist (2015).