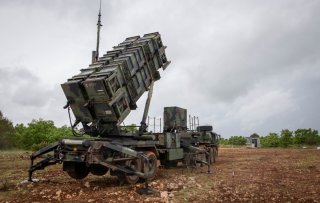 U.S. president Joe Biden and Ukrainian president Volodymyr Zelenskyy met Wednesday in the Oval Office, sending a clear message of resolve and unity to the Kremlin. The meeting also conveyed an important message to the regime in Iran, which has been providing Russia with weapons in support of its brutal war in Ukraine.

In some ways, the move also puts a spotlight on Israel. The country refused to provide Ukraine with its coveted Iron Dome air defense system, with its more than 90 percent success rate intercepting rockets, missiles, and UAVs, among other top-of-the-line Israeli weapons systems. Ukrainian officials have pushed hard for these systems, with official requests coming from the president’s office, the foreign ministry, the defense ministry, and the Ukrainian embassy in Israel.

The reasons for Israel’s refusal are several. First and most important, Israel harbors legitimate fears that if any of its systems were to be deployed, they would be captured by Russia on the battlefield. From there, they are all but guaranteed to be sent to Iran for analysis. This analysis could enable the regime to find ways to counter these systems in the battlespaces where Iran’s proxies and Israel are squaring off. This would benefit Hezbollah, Hamas, and Palestinian Islamic Jihad in future confrontations with Israel. The outgoing Israeli government made it clear that this was not a risk it was willing to take. The new government will probably say the same.

Second, Israel is reticent to send these systems elsewhere when the Israel Defense Forces have already assessed an urgent need to acquire more systems and interceptors for its own protection. Hezbollah and Hamas’ weapons arsenals continue to grow, despite Israel’s largely successful efforts to interdict Iranian weapons smuggling. The production of the necessary numbers of systems and interceptors will take some time, and the timetable could be set back by exports to Ukraine.

Finally, Israel does not wish to trigger a harsh response from Russia, which maintains a significant presence in Syria, where Israel is engaged in regular kinetic activity to neutralize efforts by the Iranian regime to smuggle advanced weapons to Hezbollah in Lebanon. Recent reports indicate that Russia is withdrawing troops and systems, mainly air defenses, out of Syria. They cannot maintain Syrian systems because of a scarcity of spare parts, and they have declined to replenish the air defense systems destroyed by the Israeli Air Force.

Some systems are now slated for redeployment to Ukraine. Still, the Russians are not leaving Syria. Whether Israel likes it or not, the Russian military presence is probably a long-term issue with which Israel must contend.

In some respects, Biden’s decision may create a cleaner division of labor with Washington. With Patriots deployed, Ukraine won’t need Iron Dome as urgently. Israel can now focus on the aid it has already committed to giving Ukraine. Israel has agreed to provide humanitarian assistance (primarily through a large field hospital on the Polish border). Israel can also provide Ukraine with accurate and timely intelligence on Iranian activities as well as the drones and ballistic missiles Tehran is sending to Russia. Israel can also send sensors and an integrative Early Warning system that would dramatically help Ukraine, based on Israeli experience.

Biden’s decision to send Patriots to Ukraine runs the same risks as they would to Israel, of course. Captured American systems could be exploited by both Russia and Iran, thereby weakening their efficacy on the battlefield. Some American systems have reportedly already been captured by the Russians in Ukraine and forwarded to Iran. But for America, the desire to buttress the U.S.-led world order might trump such concerns.

Biden and his advisors must decide for themselves whether such risks are worth taking. However, it’s also worth noting that the Pentagon already may not have enough air defense systems around the world to cover its own deployed forces.

The war in Ukraine has forced countries to clearly identify their national interests. The involvement of Iran in this war has shed light on an alliance that can and should be countered by the United States, Europe, and the rest of the free world. By now, it has become abundantly clear that the 2015 nuclear deal with Iran is in fact dead, as Biden recently said, even if he declines to say so officially (and even as some U.S. and European officials continue to look for “creative” way to revive the deal).

This is the right move, given that the associated sanctions relief would enrich the regime at a time when the West should be depriving Iran of funds for aiding Russia’s aggression against Ukraine. The regime also should be punished for its serious violations of human rights, including the killing of women and girls protesting against injustice.

Rather than helping Iran stabilize economically, the goal should be to weaken it in every way possible. This will help Israel. But it will also help Ukraine and the United States in a combined effort to defeat Russia’s war of aggression.

Brigadier General (res.) Jacob Nagel is a senior fellow at the Foundation for Defense of Democracies (FDD), and a visiting professor at the Technion aerospace faculty. He previously served as Prime Minister Benjamin Netanyahu’s national security advisor and head of the National Security Council (acting).