Paul Ryan: The Obama Administration Has No Foreign Policy 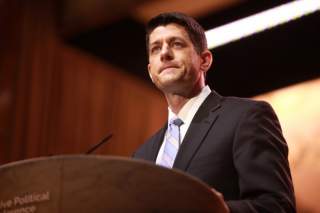 Editor’s Note: Harry J. Kazianis, Managing Editor of the National Interest, submitted the following questions to former Vice Presidential candidate and author of the recent book The Way Forward: Renewing the American Idea Congressman Paul Ryan. Below are his responses:

Kazianis: Thinking back to the Presidential campaign of 2012, if there was one single thing you could go back and undo or decision you would change, what would it be?

Ryan: The outcome! I think the country would have been much better off if Mitt Romney had been elected president. But one of the things I learned is that 88 days—the amount of time I was on the ticket—is not nearly enough time to make your case to the American people. Basically, you get stuffed into a cannon and shot out into the middle of country, and it’s really hard to articulate a vision in such a short amount of time with the media and the opposition coming after you.

That’s one of the reasons I wanted to write this book: I wanted to speak for myself—on my own terms—without the fog of an election surrounding me. To this day, the 2012 campaign informs my view of what it will take to renew the American idea and get our country back on track. Leaders need to offer a clear vision of what they will do to fix our country’s problems. And if I had to do it over again, I would have pushed for more opportunities for our party to do precisely that.

Kazianis: Looking ahead to the 2016 Presidential race, your name has come up quite a bit as a possible candidate. Instead of asking you the obvious question, “Will you run?,” what, in your view, is the most important skill one needs to have to be a successful president? Is there a particular president or historical leader that guides your own thinking?

Ryan: One leader who shaped a lot of my thinking was my mentor, Jack Kemp. He taught me that you always want to be expanding the tent and you can do that by speaking to people’s aspirations. He had an amazing amount of energy—it was just infectious—and it drew people to him and to our party. In a way, I’m trying to pick up where he left off—to make the conservative movement into a national movement once again.

Kazianis: I would now like to turn to a topic that you have quite a bit of expertise on: the nation’s fiscal health. It seems like the question of the deficits that rack up year over year has left the news cycle as issues like ISIS, the state of affairs in Ukraine and other topics now dominate the headlines. While we no longer have $1 trillion deficits year over year, we do owe a substantial sum of money to nations like China and others. Do you feel Republicans have given up on this issue as the economy has improved slightly?

Ryan: I believe that there is plenty of blame to go around in both parties for the country’s current fiscal situation. I think that for much of the last administration and even before that, Republicans in Washington abandoned their core principles of fiscal responsibility. When I first got to Congress in 1999, earmarks were the biggest sign that the spending culture was out of control. A Member of Congress even went to jail for abusing them. What I saw was a party that had lost its principles and looked hypocritical. They said they were for fiscal conservatism, but they didn’t act like it. I think that’s one of the reasons why Republicans lost the majority in 2006.

When President Obama took office, things got much worse. The Democrats had total control over the government, and in my opinion, they vastly overreached. The result has been the worst economic recovery since World War II. Today, millions of men and women not only aren't working; they aren't even looking for work. That’s just not good enough.

Our debt is over $17 trillion dollars and deficits are estimated to go back up in a few short years, so we have to address our fiscal situation before it gets worse. That’s why, for the fourth year in the row, I wrote and passed a budget that pays off the debt and grows the economy. So I would like to think that, in recent years, we have taken steps in the right direction to restore our fiscal responsibility.

Kazianis: Do you feel there is still possible momentum to reduce the deficit substantially in the years ahead and come closer to something resembling a balanced budget?

Ryan: This is why elections are so important. We currently have a president who is focused on cutting military spending while massively expanding entitlements, and whose only solution to “balance” the budget is to raise taxes.

Meanwhile, Senate Democrats went years without even passing a budget, and there wasn’t any break in the impasse until Senator Patty Murray and I put together the Bipartisan Budget Act in 2013. That provided some small spending reductions, but not nearly enough to solve the problem.

With the divided government we’ve had, the momentum hasn’t been there in recent years, but it’s not for a lack of trying on my part. I’ve passed four balanced budgets since becoming chairman of the Budget Committee, and my budgets pay down the debt by reforming government programs so that they work without bankrupting the country. There are good proposals out there for balancing the budget, but most will never see the light of day, because we don’t have the right leadership in Washington. That’s the real problem.

Kazianis: Over the last few years, President Obama has attempted to work towards multiple new free-trade agreements that, if signed, could be major economic as well as geopolitical game changers for the regions they impact. If you could, please give us your assessment of the Trans-Pacific Partnership (TPP). Do you feel the agreement as constructed would create more jobs and economic growth? How would you characterize the Trans-Atlantic Trade and Investment Partnership (TTIP)? How would this help or hurt the U.S. economy?

Ryan: The Trans-Atlantic Trade and Investment Partnership would reassure our friends in Eastern Europe. And the Trans-Pacific Partnership would reassure our friends in Asia. And as we draw our friends closer in a time of danger, we'd put our rivals on notice: There are costs to confrontation and benefits to collaboration. And I think both trade agreements would help our economy. They would help create jobs by giving our exporters access to new markets. So I think it’s vital we develop these partnerships.

Kazianis: Turning to matters of international affairs, the United States has a number of challenges on its plate. When it comes to the threat posed by the Islamic State or ISIS, do you feel President Obama has the right strategy to combat this challenge? How would a Romney/Ryan White House have tackled ISIS?

Ryan: When it comes to foreign policy, my biggest criticism of this administration is that it doesn’t have one. What we need is a comprehensive strategy to deal with this threat. That means support for moderate Muslims in the region and cooperation with moderate Muslim countries.

I believe we could’ve done more to get a Status of Forces Agreement in Iraq as the military recommended. The president insisted we could never achieve an agreement without a vote in the Iraqi legislature, and yet now we have one, even though we didn’t have a vote. We also could’ve helped the Free Syrian Army at a much earlier stage in this crisis when it was so much easier to separate the good guys from the bad guys, and the president chose not to do that.

To be fair, I think the president has changed his policies for the better, but I think one of the reasons we are where we are is that he made some terrible mistakes. The intelligence community has been warning about ISIS for quite some time, so this isn’t a new problem. The administration helped create the vacuum in Syria and in Iraq, which gave them the ability to take over whole pieces of these two countries. Now, he’s got a better policy today, and he needs to see it through.

I’m glad he’s changed his policy and I think he’s going in the right direction. I just think we need to learn from the mistakes that have been made in the past, and not second-guess and micromanage our military. Let’s give them the mission—to defeat ISIS—and then give them the flexibility to complete the mission.