Paul Stands Alone: One Candidate Is Confronting the Hawks on the Road to War 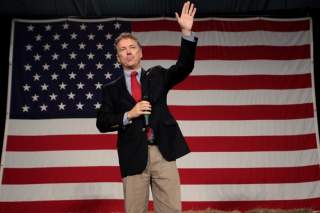 Rand Paul is best known for thirteen-hour filibusters, but he’s also willing to use the occasional four-letter word.

The Kentucky senator and 2016 Republican presidential candidate was hitting back against national surveillance last week in a room packed with young supporters: “So when they stand up on television and say, the tragedy in Paris means you have to give up your liberty, we need more phone surveillance—bullshit!”

Paul is understandably fired up. He’s coming off his best debate performance of the campaign, highlighted by an exchange with Florida senator Marco Rubio in which he questioned whether increasing the military’s budget through deficit spending was really fiscally conservative. It was reminiscent of his father’s debate moment with Rudy Giuliani eight years ago, except the younger Paul is more effective at couching his arguments in terms accessible to mainstream Republicans.

But even in that moment, Rubio had the easier argument to make with a Republican audience: "I believe that the world is a safer and a better place when the United States is the strongest military power in the world…. We can't even have an economy if we're not safe.” That argument became easier still with the heightened concern about terrorism that followed the Paris attacks.

The political climate created by those attacks now threatens to stifle whatever momentum Paul generated out of the third debate, as well as strengthens the GOP consensus in favor of a more aggressive anti-ISIS military posture. Already facing an uphill battle for the nomination, and perhaps even relevance to the race, Paul and his campaign look to fade further still after the atrocities in France.

But so far, Paul isn’t backing down. He’s continuing to argue against trading liberty for security. He’s disputing whether the surveillance powers demanded by the government to fight terrorism will even work. And he’s pointing out that military adventures from Iraq to Libya have created the chaos that has allowed ISIS and other barbaric jihadist terror groups to thrive.

It is not the most natural reaction for a politician. But Paul has already tried to reassure GOP hawks triangulating on foreign policy. It didn’t work. Meanwhile, Donald Trump has remained stubbornly at the top of the polls despite reminding people he also opposed the Iraq War and actively questioning whether George W. Bush really made the country safer. And there are a dozen other candidates, including Trump, all trying to out-hawk each other on ISIS.

On a conference call with reporters last week, Paul said, “The first Iraq war was a mistake. I don’t expect a second one to go any better.” He wants the boots on the ground fighting ISIS to be Arab and Muslim boots.

Just as a Democratic electorate doesn’t want to hear arguments for government inaction on domestic policy, Republicans want to hear action on foreign policy. At the height of the debate over what to do about Syrian refugees being resettled in the United States, Paul pushed legislation pausing visas from high-risk countries while the vetting process is bolstered and good entrance-exit tracking is implemented.

Why propose invading and occupying the foreign countries from which terrorists come rather than securing our own country’s borders and interior? If the latter is impractical and “isolationist,” how can the former ever work? France was plainly more vulnerable because it had a large population of unassimilated Muslims at home willing to work with those from abroad who would do the French harm.

A sober look at the realities of Muslim immigration and the unassimilated native-born in Europe must be accompanied with appropriate nuance and respect for human dignity, lest it too easily bleed into an unjustifiable and indiscriminate fear and loathing of Muslims as a group rather than a carefully focused critique of radical Islam. Many of Paul’s more libertarian supporters are uncomfortable with talk about restricting immigration in any way.

But the practical political alternative to more screening of those who wish to enter the United States is likely to be more surveillance of Americans by their government at home and more preventive wars abroad. Pick your poison.

President Barack Obama has made Paul’s task more difficult, as he speaks the language of foreign-policy restraint even if he doesn’t always practice what he preaches. But Democratic frontrunner Hillary Clinton is a liberal hawk and it is her foreign policy that Paul’s more hawkish rivals are echoing on the campaign trail.

Paul must also continue to talk about the subject of his disagreement with Rubio. Yes, it’s a delicate one. Military spending is authorized by the Constitution and is an essential function of government. Nobody would propose leaving America vulnerable to threats in order to balance the budget. The heroic men and women who serve our country in the armed forces are not the paper-pushers at the department of motor vehicles.

Yet defense spending costs money, and quite a lot of it. It is respecting rather than diminishing the sacrifices of our servicemen to insist that it is spent wisely. The decisions on how to use our military are still ultimately made by politicians and bureaucrats.

It’s important to get conservatives to stop thinking of the Pentagon as an honorary member of the private sector but rather a part of the government where good intentions and big dollar amounts don’t guarantee the right outcomes. If Paul can help do that, his campaign will be something of a win no matter how he fares at the ballot box.