Pay Attention to North Korea Between Nuke Tests Too 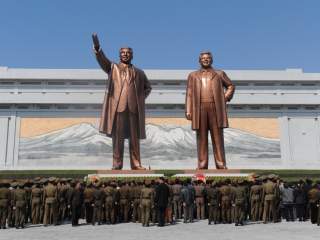 Remember North Korea, that horrible, tyrannical, family-owned dictatorship that enslaves its citizens, devotes a considerable amount of its national capital towards improving its weapons of mass destruction programs and uses its nuclear capability to extort economic and political benefits from the international community? Of course you do. Ever since Kim Jong-un went ahead on January 6 with Pyongyang’s fourth nuclear test in nine years, North Korea has once again catapulted to the top of America’s national security conversation.

It usually takes a horrific report from United Nations human rights monitors or an underground nuclear explosion for most Americans to even think about the reclusive, isolated country on the Korean Peninsula that is run by a cult-like family enterprise. In between the well-documented studies describing in intricate detail the “unspeakable atrocities” that have been perpetrated by the Kim regime and the late-night “breaking news” headlines on CNN about yet another unusual seismic event near Punggye-ri, North Korea barely registers as a concern among U.S. policymakers, at least when compared to other line-items on the agenda. Indeed, the Obama administration has treated the North Korean problem as if it doesn’t really exist; the White House calls its policy “strategic patience,” but in layman’s terms this approach amounts to ignoring Pyongyang’s behavior until it does something so ghastly that it requires a tough U.S. response.

In the end, nothing really changes on North Korea. Across Republican and Democratic administrations, the North Korea issue has trotted well-worn ground: the Kim’s lash out, the U.N. Security Council unanimously passes a statement or a resolution condemning its “provocative” behavior, the Security Council passes new economic sanctions, the United States issues new executive orders targeting North Koreans involved in WMD activities and the U.S. military flies a couple of B-52 bombers over South Korea to send a message of deterrence to the North. The result of this cycle is the same: more North Korean weapons tests, more sanctions from the United States, more ambivalence from China and more curious offers from Kim to negotiate his capabilities away for a formal peace treaty.

Despite what the Republicans running for president may say during national debates or at their campaign rallies, President Obama and former Secretary of State Hillary Clinton are not directly responsible for North Korea’s nuclear tests—just as President George W. Bush and Secretary of State Condoleezza Rice were not directly responsible for the DPRK’s first nuclear explosion in the fall of 2006. Marco Rubio’s assertion that the explosion that occurred on January 6 is “just the latest example of the failed Obama-Clinton foreign policy” is the typical, empty-headed campaign rhetoric that Americans have gotten used to during an election year. But more importantly, Rubio’s statement (and those of the rest of the GOP field) misses the broader point: North Korea has been an insolvable problem for presidents of both political parties. If Rubio finds a magical route to the Oval Office this coming November, he too will experience first hand how difficult it will be to deal with North Korea, let alone make good on the longstanding U.S. policy of denuclearizing the Korean Peninsula.

The United States is just now getting around to contemplating its response to Pyongyang’s latest nuclear weapons test. Deputy Secretary of State Antony Blinken has been traveling around Asia and meeting with his South Korean, Japanese, and Chinese counterparts in the hope that some kind of regional unity can be forged and that Beijing will find the gumption to finally crack down on commercial trade and banking transactions with the North. The U.S. Congress, with what seems like administration support, is now in the process of passing a bipartisan sanctions bill that would expand U.S. sanctions to third-party financial institutions that engage in significant dealings with the Kim regime. And the Security Council is getting ready for yet another resolution.

Yet the big questions remain. Will any of these economic penalties hit North Korea’s pocketbook hard enough that its leadership comes around to seriously reevaluating whether their nuclear activity should be frozen? Is Washington willing to put in place Iran-style sanctions that would target persons and entities in third countries that transact with North Korea? How would China react to such secondary sanctions? Will Beijing slowly embrace the realization that an erratic and nuclear North Korea is worse for its own interests than the possibility of a Kim regime collapse? If not, are we past the point where a nuclear free Korean Peninsula is even possible? Is the international community now stuck with North Korea as a nuclear power, whether we like it or not?

The next President will need to answer all of these questions, hopefully before Kim Jong-un decides to authorize another test.