Paying Ransoms: What the Barbary Pirates Teach Us about ISIS 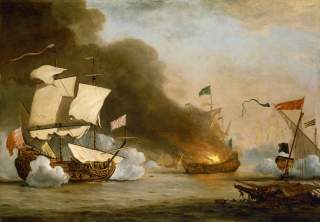 There is a debate raging between the United States and Europe over the wisdom of paying ransoms to terrorists who kidnap people. The United States refuses to pay. The Europeans say they do not pay, yet end up paying through intermediaries (often the hostages’ employers, in the case of kidnapped journalists). A recent report by the New York Times found that Al Qaeda-affiliated groups have pocketed over $125 million from such ransoms over the past five years. The result is that Europeans are targeted more than Americans or Brits—they pay more—and hostage taking by groups like ISIS is on the rise.

A similar dilemma vexed European and American statesmen in the late eighteenth century. Instead of Islamist terrorist groups like ISIS, it was Barbary corsair pirates roaming the Mediterranean Sea. The pirates were not all Muslims or North Africans—two-thirds of their captains were in fact Europeans who had “taken the turban”—and were motivated mostly by profit, but also partly by religion. They sought to disrupt European and American maritime trade by raiding ships, stealing cargos, and holding crews for ransom. Despite the various peace treaties signed, these North African pirates saw themselves in a “permanent state of war” with their Christian adversaries, writes Paul Silverstein, an anthropologist at Reed College. Likewise, Europeans treated the pirates as “pathological parasites,” but refused to use force against the nonstate actors.

In 1785, Thomas Jefferson sought to get the Europeans to break the cycle of paying yearly “tributes” to North Africans—namely the sultan of Morocco and governors of Tunis, Algiers and Tripoli—in exchange for safe passage for their merchant vessels. Europe was still primarily mercantilist at the time, and its armies were a collection of mercenaries and privateers, not the professionalized militaries of today. Britain and France refused the Americans’ offer out of commercial self-interest. It was the onerousness of the tributes that eventually persuaded the United States to resort to using force against the Barbary corsairs—thereafter immortalizing the “shores of Tripoli” phrase in the U.S. Marine Corps hymn.

Norms around the payment of tribute gave way to the greater use of force against such nonstate actors, eventually leading to the law of the seas doctrine known as “hot pursuit.” This governed the ability of one state's navy to pursue a foreign ship that had violated laws and regulations in its territorial waters, even if the ship had fled to the high seas. Today, policy makers employ the term to justify (arguably illegal) cross-border counterterrorism operations, but it makes the analogy between yesterday’s Barbary pirates and today’s terrorists that much more apt, if imperfect.

Like today’s world, whereby states employ mercenary soldiers and nonstate actors as proxies, there was plenty of hypocrisy to go around back then: Europeans benefited from the training its own privateers received from corsair pirates—the line between the two groups was often blurred. Pirates predated on virtually all ships from all countries, and so Europeans found these groups quite useful in weakening their rivals to maintain their own commercial supremacy beyond the Mediterranean. As Silverstein notes, it was not for humanitarian reasons that these states turned to force to combat piracy, but rather to “[negotiate] better nonaggression treaties with North African rulers.” They were motivated by cost-benefit analysis and profits, not by morality. This fed a cycle—or what one U.S. ambassador at the time described as a “protection racket”—that continued for centuries. A similar dynamic is dividing Americans and Europeans today. "We must find a way to break the cycle,” David Cohen, the undersecretary for terrorism and financial intelligence at the Treasury Department put it to a Chatham House audience in 2012. “Refusing to pay ransoms or to make other concessions to terrorists is, clearly, the surest way to break the cycle, because if kidnappers consistently fail to get what they want, they will have a strong incentive to stop taking hostages in the first place." The same thing might have been said by a U.S. official in the late 1700s.

Terrorism, like piracy in its heyday, is a growth industry. Today, a terrorist group can expect to receive around $10 million per hostage, up from $200,000 in 2003. By contrast, according to Janice Thomson, author of Mercenaries, Pirates and Sovereigns, in the late 1700s, the United States paid a lump sum of around $600,000 (in today’s dollars) and $20,000 annually in naval supplies to North African states as tribute to ensure the safety of its vessels.

The lesson of how the West conquered its piracy problem applicable to today’s debate is: While it may pay not to pay “tributes” or ransoms, there are collective action problems to overcome. Like in the seventeenth and eighteenth centuries, each country whose nationals were targeted faced private incentives to undercut the other by defecting and giving in to these groups’ demands, which resulted in all foreigners being targeted. It took the U.S. Barbary Wars of the early 1800s and France’s occupation of Algiers in 1830 to eventually stamp out piracy in the Mediterranean.

The United States, as well as Great Britain, remains steadfast about not paying terrorists ransoms (though it does negotiate with them and exchange prisoners when its own servicemen are captured, as the case of Sgt. Bowe Bergdahl revealed). When ISIS asked for money and a prisoner swap in exchange for the life of James Foley, an American reporter kidnapped in Syria, the United States refused. His recent beheading has renewed criticism that the Obama administration did not do enough to save his life, despite a failed rescue attempt. There is immense pressure by authorities to take action to save the lives of hostages—the White House website has been bombarded with petitions to save another American held captive, Steven Sotloff. But the ISIS scare has also sparked criticism toward Europe that by paying ransoms, it is not doing enough to “break the cycle” of kidnappings and if anything, is encouraging them.

Jefferson was right not to give in to the pirates’ demands and faced a duplicitous Europe all-too-willing to pay up rather than risk conflict. Today’s European leaders are similarly too willing to give in to these groups. We can all agree that the Islamists in Iraq and Syria kidnapping and beheading their captives are “pathological parasites.” But the lesson of eighteenth-century piracy is that acquiescing to these organizations will only make things worse.

Lionel Beehner is formerly a senior writer at the Council on Foreign Relations, a PhD candidate at Yale University, and editor of Cicero Magazine.