Peace in Europe Has Never Been So Fragile 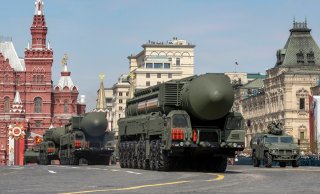 On May 8, 2022, European Union (EU) members and the United States not only celebrated the Allies’ victory over Nazism in Europe, but they also cheered over seventy-seven years of uninterrupted peace in the “Europe that America made”—that is the ensemble of nation-states that regrouped in what came to be known as the European Union, protected by the United States’ military might via NATO. Despite the many wars that have happened since 1945 on the European continent outside of the joint NATO-EU security and politico-economic framework, this unprecedentedly long period of peace in Europe is nothing short of a miracle, considering that Europe’s history prior to World War II had been defined by war—it was, indeed, constant warfare between Europeans that allowed them to perfect the art of war to such an extent that they managed to dominate the world between the 1600s and the late 1800s.

Yet, this year’s celebrations were certainly more muted. Today, Russia’s war of aggression in Ukraine threatens the peace that Europeans—and in particular Western Europeans—have enjoyed for so long. The images of the war crimes committed in Bucha, Irpin, and other Ukrainian towns, the vicious war of attrition that is now being waved in the Donbas—all these elements have brought back memories of past conflicts of the twentieth century, and they are proof that, beyond the shadow of a doubt, high-intensity warfare has returned to the European continent.

It would be a mistake to think that war itself will necessarily be contained to the Donbas, or even Ukraine for that matter. The history of conflict shows us that when a stalemate is reached between two parties and they still do not agree on the balance of powers, war not only continues, but belligerents seek new fronts to gain a military advantage. Although it remains at this stage unlikely that Russia would dare to attack a NATO member directly, it could certainly try to spill the war over to neighboring Moldova (which is not part of NATO), and it has sent signals recently that it could indeed; it could also encourage client, sub-state actors, including inside NATO-members like Montenegro to impose war in the Western Balkans and thus divert resources from the front in Ukraine.

The return of war in Europe in its crudest form has shocked us all. But yet none of what is happening now should come as a surprise to any of us: ever since the short Transnistria war of 1992, the Russian military has made it clear that it was ready to go to war to avenge the humiliation of the Soviet Union’s breakup, and it was also clear since Vladimir Putin’s ascension to power that they had found in the former KGB spy a head of state they could trust. Ever since the oil bonanza of the 2000s, when Russia started modernizing its army and updating its military strategy with hybrid elements such as cyber, economic, and informational warfare in its doctrine, we should have been aware that these new resources could be used on the European continent. There were many warnings: the war in Chechnya, although confined within the borders of the Russian Federation. The 2008 war in Georgia, though, was also clearly away from Russian territory, and so was Russia’s intervention in Syria. It could also legitimately be argued that today’s war in Ukraine did not start in February, but that it is actually the extension of a conflict started with the occupation of Crimea and the Donbas (albeit, in the latter case, by a proxy) since 2014—a war which actually killed 15,000 people before the start of the so-called “special military operation” in February.

Putin’s war in Ukraine, however, should not be Europe’s only worry. In fact, the continent is facing an increasing number of threats not only in its neighborhood but also inside its borders. Twenty years ago, in the 2000s, the wars closest to Europe were taking place in places such as Sudan, Iraq, or Afghanistan—with distant Georgia barely reminding Europeans that is could be of concern to them. In the 2010s, war already became a closer reality with Russia’s occupation of Crimea and its propping up of a proxy war in the Donbas, while Libya and Syria descended into civil war, creating migration waves that destabilized European societies. War scenes actually came back to the heart of Europe, albeit in a very limited space and time, when Paris, Brussels, Berlin, and Nice (among others) fell victim to ISIS’s terrorism. Europe then lived under a peculiar war paradox: there were more armed soldiers in uniform patrolling the streets of Paris, capital of a country officially at peace, than there were in the streets of Kyiv, capital of a country that didn’t deny that it was already at war.

The first two years of the following decade have confirmed the continued deterioration of Europe’s security architecture: before Russia went to war with Ukraine in February 2022, Greece and Turkey narrowly avoided direct naval confrontation in the eastern Mediterranean Sea in the summer of 2020, while tensions over Libya came close to boiling point between the French and Turkish navies in the same region and over the same period. Closer to Brussels, the situation in the Western Balkans has never seemed so fragile, as the Dayton agreement that has upheld the peace in Bosnia and Herzegovina (and beyond, potentially the whole region) is increasingly contested by numerous actors, including some that are members of the EU.

EU members are not immune to internal tensions: before the pandemic, France had gone through a particularly violent jacquerie with the Yellow Vest movement; its difficulty to integrate Muslim populations into the republican fold had inspired a number of intellectuals and writers to envisage the possibility of an ethnic civil war inside the country. Meanwhile, Spain has had to deal with a separatist movement in Catalonia that may have been peaceful on the outside but has toxified politics and social relations all over the country. And even outside of the EU, Britain is also not immune to the threat of sectoral violence, as the post-Brexit settlement in Northern Ireland has reignited old grudges, just at the time in which Catholics overtook Protestants as the majority demographic, for the first time in a province that had specifically been created to keep a protestant, and therefore unionist majority.

These internal tensions (and many others) may have been temporarily put under a lid during the Covid-19 crisis, as citizens locked themselves up in their homes and governments bailed them out. But they may come back with a vengeance in the coming months and years, in particular, if inflation continues to cripple European economies, some of which were already in a bad shape before the health crisis: in 2020, the GDPs of France, Spain, Italy, Greece, and a few others were actually lower than in 2010. Of course, Russia is betting that this kind of economic and social instability is either going to take Europeans’ attention away from Ukraine, or that they will turn into open warfare so as to give the Kremlin a free hand at least in those Eastern European countries that are not part of NATO.

We must today face the reality that Europe is much less safe than it was ten years ago, and as a result, Russia’s current war in Ukraine may not end up being a horrifying exception to peace in Europe, but the prelude to something much nastier. Europeans are of course the first to blame for this: many showed incredible naïveté by believing that pacifism in one continent could be pursued while threats were piling up and getting closer in its own neighborhood. Europeans could and should have been much more prudent in their pursuit of cheap Russian gas, they should have been more straightforward with Turkey about their unwillingness to accept it inside the EU, they should have started to rearm (and fulfill their commitment to spending 2 percent of their GDP on defense), and they should certainly have been more careful about the risks of dealing with China, may that be in terms of elites capture and corrupting influence, but also in terms of security and intellectual property.

European leaders should also have been quicker to understand that the adoption of the euro, the rise of Germany as the continent’s sole economic powerhouse, and the enlargement of the EU from fifteen to twenty-eight (now twenty-seven) countries, despite their potential long-term benefits, would also create imbalances that would ultimately increase tensions all over what was still a very new union. Although many of these tensions have been eased by the adoption of the NextGeneration recovery fund which, while massive, did not prop up inflation in the way that the United States, these transfers from Europe’s core in the northwest to the poorer south and east of the union can only work in the long-term if the northern economies continue to grow substantially. And today, Germany’s growth model based on cheap Russian gas, a Chinese market open to its quality products, and a cheap labor force in Central Europe is clearly coming to an end.