Peace Problem: Israel Knows How to Capitalize on Its Conflict With Palestinians 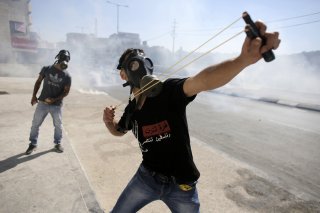 U.S. envoy Richard Mills didn’t say anything particularly surprising the other day when he told the UN Security Council that, to keep the “two-state solution” viable, Israel should refrain from settlement and annexation activity, while the Palestinians should abandon incitement and payments to terrorists.

But, as President Joe Biden restores a traditional U.S. approach to the Israeli-Palestinian conflict in hopes of reviving the two-state solution, America’s global challenges elsewhere, the Middle East’s changing dynamics, and a divided Palestinian leadership will combine to make peace even more elusive.

None of the three entities that would drive a successful peace effort—Washington, Jerusalem, and the Palestinian leadership in Ramallah—is sufficiently well-positioned or motivated to bring a peace deal to fruition.

To be sure, Biden is restoring U.S. diplomatic relations with the Palestinian Authority by restarting U.S. aid and reopening diplomatic offices that President Trump had closed. But while such steps will ease U.S.-Palestinian tensions, they won’t set the stage for a big new U.S peace push.

In fact, Biden doesn’t plan to make Israeli-Palestinian peace a big priority, and Secretary of State Antony Blinken says the United States will be “doing less, not more, in the Middle East” as part of a broader shift toward Asia—where an emboldened Beijing is challenging Washington for global leadership. Russia’s aggression, North Korea’s growing nuclear program, and America’s frayed relations with its allies are other immediate priorities that rank higher for Biden than does the Middle East.

Even in the Middle East, the United States has more pressing issues as well. Iran is making greater progress toward nuclear weaponry while increasingly threatening America’s regional interests. To increase its options in response to a potential Iranian attack, the United States is now beefing up its military presence in Saudi Arabia.

Saudi Arabia, though a longstanding U.S. ally, presents its own challenges. While Riyadh heads a Sunni regional bloc that opposes Iran and works ever-more closely with Israel, its military involvement in Yemen and brutal human rights record have raised concerns in both parties in Washington and prompted Biden’s foreign policy team to promise a review of the U.S.-Saudi relationship.

Israel: Israel, too, has more pressing issues on its plate, as it seeks to contain Iran and build on new peace agreements with a growing number of Arab nations.

Iran remains a potential source of serious tension between Jerusalem and Washington—as it was under President Obama—since Biden hopes to rejoin the 2015 global nuclear deal with Iran that Obama orchestrated, that Trump withdrew from in 2018 and that Israeli Prime Minister Benjamin Netanyahu fiercely opposes as far too weak to contain Iran’s nuclear aspirations.

Israel will face no opposition from Washington as it seeks to build on its recent peace agreements with the United Arab Emirates, Bahrain, Sudan, and Morocco—though Biden won’t necessarily provide, as Trump did, more military assistance to Arab nations that ink agreements with Israel.

The more that Arab nations make peace with Israel, the less that Washington, Europe, or the West, in general, will push the time-worn, and clearly inaccurate, theory that Israeli-Palestinian peace is the key to broader regional peace. That, in turn, will make the Israeli-Palestinian conflict a lower concern for all such parties.

The Palestinian leadership, meanwhile, remains almost hopelessly divided and Palestinian Authority President Mahmoud Abbas’s recent announcement of elections in coming months—to the Palestinian parliament in May, to the presidency in July, and to the National Council of the Palestine Liberation Organization in August—may only exacerbate the problem.

The Palestinian side is split between the Palestinian Authority, which runs the West Bank, and the terrorist group Hamas, which runs Gaza. The former alternates between cooperation and confrontation with Israel, while the latter is a genocidal organization that’s committed to Israel’s destruction.

Even if, as experts speculate, Abbas announced elections to curry favor with Biden, who voiced strong support for Israel throughout his Senate career and who has criticized Abbas for not seizing “opportunities,” the prospects of elections do not seem to excite the Palestinian people themselves.

That’s hardly the basis for a new Palestinian government to make the tough, though necessary, compromises for peace.

For decades, the Israeli-Palestinian conflict has commanded the time and effort of countless officials in Washington, Jerusalem, and Ramallah. Today, U.S. and Israeli officials have what they consider bigger fish to fry, while the Palestinian side lacks the unity that a serious peace effort would require.