Peace, War or Chaos?: The 5 Big National Security Challenges of 2018 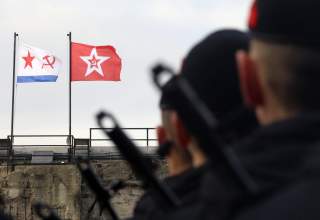 If, before Election Day 2016, you predicted Donald Trump would win the presidency, that a special counsel would be appointed to investigate potential collusion between Trump campaign officials and the Kremlin, and the U.S. military would take military action against the Syrian government, there’s a good chance that your family or friends would call you crazy. If you happened to add that provocateur Marine Le Pen would qualify for the French presidential runoff and that North Korean dictator Kim Jong-un would threaten to bombard the U.S. territory of Guam, your loved ones might have tried to arrange an appointment with a psychologist.

Of course, all of this actually happened. Trump is approaching the one-year anniversary of his tenure. Guam is very much in Pyongyang’s crosshairs in the event of a military conflict with the United States. And Le Pen, a name synonymous with ultra-nationalism in French politics, beat every presidential aspirant except centrist and Europeanist Emmanuel Macron. Former FBI Director and Special Counsel Robert Mueller, meanwhile, continues to subpoena documents, interview witnesses and persons-of-interest, issue indictments and plea bargains, and keep the White House off balance.

So, with the major disclaimer that I could be dead wrong at the end of the coming year and look like a lunatic living in fantasy land, here are five foreign policy predictions for 2018.

The U.N. Gives up on Syrian Peace Talks

U.N. Special Envoy Staffan De Mistura, a career diplomat with a sterling reputation, endless optimism, and four decades of experience working in diplomatic trenches, has just about lost his patience. A job that veteran correspondent Janine di Giovanni aptly described as akin to “staring into an abyss” has proven to be just that for the U.N. troubleshooter; a period on unproductive, aimless diplomacy among combatants who don’t find it in their interest to negotiate.

After three and a half years of grueling talks between two stubborn parties who believe that history will vindicate them, De Mistura is ending the year atone of the lowest points in his long diplomatic career. He has presided over eight rounds of intra-Syrian talks in Geneva ballrooms since the process began in early 2016, with each round ending with nothing to show for the effort but bitterness and anger. In the days after the last round collapsed in December due the Assad regime’s refusal to talk about anything but counterterrorism, De Mistura expressed his disappointment to the Security Council at what he termed a “golden opportunity missed.”

The special envoy is preparing for a ninth round of talks in January, with the writing of a new Syrian constitution and mechanisms for free and fair U.N.-monitored presidential and parliamentary elections on the docket. There is no indication, however, that Assad or the beleaguered Syrian opposition is in any way, shape or form prepared to meet one another halfway or even act constructively. In the very real likelihood a ninth and tenth round ends without any positive results, De Mistura may do what his two predecessors did years ago: pack up and fly home.

The Two-State Solution Is Buried

Whether one agrees or disagrees with President Trump’s decision to recognize Jerusalem as the capital of Israel, the announcement seems to have killed the prospects of the United States as a mediator to the Israeli-Palestinian conflict. Even if Palestinian Authority President Mahmoud Abbas expected deep down in his psyche that Trump would begin the process of moving the U.S. embassy from Tel Aviv to Jerusalem, he appears genuinely upset. Washington’s traditional role as the broker of the Mideast peace process is gone in Abbas’s mind, as is any peace formula the Trump administration finally publishes. In case the White House thought Abbas was just cooling off, he reiterated yet again that “[t]he United States has proven to be a dishonest mediator in the peace process and we will no longer accept any plan from the United States.”

In 2018, senior adviser Jared Kushner will release the administration’s Mideast peace parameters to the world. President Trump himself will attempt to market it as the product of a year’s worth of listening to all parties and debate among the inter-agency. Abbas will criticize the plan as too biased towards Israel’s position, and Israeli Prime Minister Benjamin Netanyahu will applaud the president’s effort while putting the responsibility of resuming of the peace process in Ramallah’s court. If Washington is lucky, the Palestinians will drop their refusal to participate in a U.S.-led process and go through the motions—only for the entire thing to break down over prisoner releases, Israeli settlement building and the municipal boundaries of who controls what in Jerusalem. If the two-state solution doesn’t die completely, Washington’s role in its foundation will be surpassed by France, the European Union and Russia.

As the war in Afghanistan proceeds through its seventeenth year, U.S. and NATO officials will continue to talk up the president’s new South Asia strategy as some kind of genius and unconventional whole-of-government plan with lasting results. Like every year since the war began a month after the 9/11 attacks, thousands of Taliban and ISIS foot soldiers will be killed in U.S. airstrikes throughout the year as the Afghan special forces operations grow increasingly confident in conducting unilateral operations. The Taliban Shura Council will be forced into another leadership battle after Haibatullah Ahkunzada is killed in a joint U.S.-Afghan counterterrorism raid along the Durand Line. Afghan security forces will chip away at Taliban-controlled districts and remain effective in preventing the insurgency from capturing a provincial capital.

Because U.S. advisers are permitted to embed with Afghan units at a lower level, however, American casualties increase compared to 2017. The Taliban will remain a prickly foe, ambushing static Afghan army checkpoints, launching suicide attacks deep into the heart of Kabul, and frustrating Afghanistan’s security situation just enough that Afghan President Ashraf Ghani and Chief Executive Abdullah Abdullah decide to postpone the 2018 parliamentary elections. Pakistan, with Washington’s tightening strategic alliance with India in mind, purposefully neglects to take action against the Afghan Taliban and Haqqani Network, convincing Defense Secretary Jim Mattis to once again block hundreds of millions of dollars in counterterrorism payments to Islamabad. Trump, who is furious progress that progress in Afghanistan isn’t fast enough, blames the commander leading the war effort instead of the war strategy itself. Tired of a war he instinctively wanted to pull out of, Trump ends Nicholson’s tenure and Chief of Staff John Kelly is ordered to deliver the news to the commander.

In 2017, U.S. and South Korean intelligence agencies assessed that Pyongyang would acquire the capability to pair a nuclear warhead with a reliable Intercontinental Ballistic Missile (ICBM) sometime in 2018. It only takes a month after the Pyeongchang Winter Olympics for Kim Jong-un to declare such a capability, a development that concerns the White House but was nonetheless expected.

What wasn’t expected was North Korea’s seventh nuclear test in the summer, the first atmospheric nuclear weapons test since 1980. The mushroom cloud over the Pacific is broadcasted around the world, generating 24/7 panic among pundits on cable television. Hawkish members of Congress, led by Sen. Lindsey Graham, lobby for President Trump to take preventive military action in retaliation in order to demonstrate American resolve and deliver a warning to Kim that his nuclear brinkmanship and violations of Security Council resolutions will result in grave, regime-ending consequences.

Trump, however, surprises nearly everyone in Washington by announcing to the American people that the weeks-long backchannel talks he authorized with the North Koreans immediately after the nuclear test has been met with enough progress to formalize it. The Chinese-sponsored freeze-for-freeze package the White House previously refused to consider becomes the foundation of America’s diplomatic strategy—not because Trump likes the proposal, but because it was the only option Washington and Pyongyang could swallow among the dwindling list of ideas. At a moment when war appeared inevitable, Trump shocks the world and decides to use the crisis as an opportunity to win a Nobel Peace Prize.

Eastern Ukraine Becomes a Proxy Conflict between Washington and Moscow

The Trump administration’s December 23, 2017 approval of lethal defense weapons and anti-tank missiles to Kiev—a decision welcomed by bipartisan majorities on Capitol Hill—turns out to be a significant miscalculation. The Minsk peace process, which was already hanging by a thread, is now a relic. Russian President Vladimir Putin, realizing that Moscow cannot risk ceding more ground to the Ukrainian army during a time when he is seeking his fourth term, redoubles military assistance to the separatists to cancel out whatever capability Kiev receives from Washington. The line of contact is no longer a buffer zone, but an active battlefront.

The death toll increases on all sides and hundreds of thousands of civilians are displaced as Russian-supported separatist units attempt an assault on the port city of Mariupol. German Chancellor Angela Merkel and French President Macron increasingly blame Washington’s arming of the Ukrainian military as the impetus behind the upsurge in violence. The Donbas returns to full-scale armed conflict, complicating any improvement in the U.S.-Russia relationship besides cooperation on case-by-case intelligence sharing on the Islamic State and Al-Qaeda.