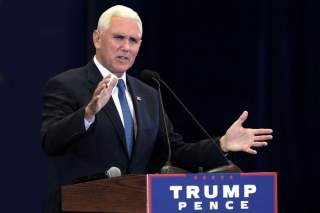 Mike Pence brought some gravity into the presidential race last night. It was Tim Kaine, normally an evenhanded and affable politician, who sought to morph into an attack dog, a role that he simply cannot successfully fulfill. His badgering, interruptions, and niggling meant that he undermined his own case and enhanced Pence’s. Hyperbolic statements like claiming that Trump has a Mount Rushmore of evil dictators that he worships fell flat.

The stolid Pence simply waited out Kaine who assailed him on a variety of fronts, from Donald Trump’s cavalier statements about nuclear weapons to his steadfast refusal to release his taxes. None of it stuck. Pence calmly responded, “His tax returns showed he went through a very difficult time, but he used the tax code the way it was meant to be used, and he used it brilliantly.” Overall, Kaine didn’t get mired in trying to defend Trump’s various statements. In waiting out Kaine, Pence actually provided a good model for Trump in his upcoming debate with Hillary Clinton this Sunday in St. Louis, which is very simple: when debating Clinton don’t take the bait.

Some of Pence’s moves simply amounted to verbal prestidigitation: presenting himself as a foreign policy hawk without acknowledging that he was deviating in any way from Trump’s playbook. Trump has gone out of his way to suggest that he will be open to a fresh approach with Russia, that he regards the old foreign policy verities as wanting. Pence gave little such sign. Rather, he decried Russian president Vladimir Putin as a “small and bullying leader,” while Kaine claimed, “you love Russia.” According to Kaine, “Let’s start by not praising Vladimir Putin as a great leader, Donald Trump and Mike Pence have said he’s a great leader.” Pence responded, “No, we haven’t.”

Pence made it abundantly clear that he remains a foreign policy hawk by calling for a no-fly zone in Syria. In Pence’s view, “The United States of America should be prepared to use military force to strike military targets of the Assad regime to prevent them from this humanitarian crisis that is taking place in Aleppo.” He added, “I truly do believe that what America ought to do right now is to immediately establish safe zones,” Pence declared, “so that families and vulnerable families with children can move out of those areas (and) work with our Arab partners in real time to make that happen.” Here he broke new ground, going much further than Trump has in his own statements. Pence showed daylight from Trump in his approach to Asia as well. Kaine charged that Trump was dangerously cavalier about the spread of nuclear weapons, pointing to his statements about allowing countries like Japan or South Korea to go nuclear. Pence was having none of it. He said, “we need an effective US diplomacy to marshal the nations in the Asian rim to put pressure on North Korea”—a statement that may be true, but also a policy that has gone nowhere during the past several presidential administrations.

Whether this debate will actually affect the polls is another matter. For all the talk of that both vice-presidential candidates would be superior to their superiors, neither Pence nor Kaine really demonstrated that. Pence is a dutiful Republican but he lacks the imagination and fervor of Trump who has tapped into real grievances. In essence, Kaine presented a version of Trump that appeals to Capitol Hill Republicans, but does not really represent what Trump has demanded during the campaign. For her part, Clinton is much more polished and savvy than Kaine who revealed his own limitations, not Pence’s or Trump’s. This Sunday’s debate should be far more revealing than the contretemps that took place last night in Virginia.