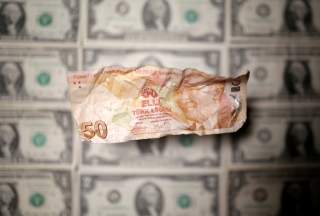 For anyone debating if Argentina’s and Turkey’s problems are likely to lead to a contagion that will tag the rest of Emerging Markets (EM), that train has already left the station. Puerto Rico defaulted on $72 billion of public sector debt in 2016, Argentina and Barbados have already gone to the International Monetary Fund, and Turkey is struggling to avert a full-fledge meltdown (which may be too late to avoid). In South Asia, Pakistan and Sri Lanka are struggling to keep their debt management afloat and willing to lean on China to help them. South Africa has slipped into a recession (the first since 2009). All the same, EM currencies, including those of Brazil, Indonesia and South Africa, are under pressure.

The 2018 EM crisis is unfolding like a slow-motion train wreck. Although it is not likely to be a carbon copy of 1982, 1994–95, 1997–98, or 2000–01, the end result will be a certain degree of upheaval in a number of countries. And it will ripple through the global financial system. These things always do. There are already concerns about the sting of Argentina on some big name investment funds, while Italian, French and Spanish banks have been hurt by their exposure to Turkey’s volatile mix of bad economics and geopolitics.

The problem is that EM faces the same old problems it always does—a strong dollar, rising global interest rates and the sad fact that some of the money borrowed during the low-interest era did not reach productive parts of the economy. At the same time, geopolitics is casting a longer shadow over the global economy—there are major elections in Brazil in October; a new government is set to take office in Mexico; Sweden goes to the polls on September 9; Brexit is increasingly looking like an economic disaster; and the trade wars are set to deepen. It is the last that could come around and bite many Emerging Market economies. As the impact of tariffs filters into the U.S. and Chinese economies, their demand for EM products are likely to decline. Consequently, many EM economies are staring into a global economic landscape that is being shaped by rising interest rates (raising the cost of any new borrowing); tighter-fisted investors (fearful of an EM contagion); and the real prospect that over the next twelve to sixteen months the planet’s two major economies (United States and China) could slow, reducing EM exports and their means of repayment.

Another layer of risk comes from the advanced economies. In the United States political risk is up (with uncertainty over who will win the November 2018 midterm elections and the outcome of the various probes). The U.S. fiscal picture is also deteriorating and the Treasury is preparing a mound of new debt for the market. Add into the mix the impact of tariffs on the economy and one has to question the creditworthiness of the world’s largest economy.

In Italy the populist Five Star-League government is preparing an expansionary budget, which will no doubt put it at loggerheads with the European Union (and Italy has a massive public sector debt equal to 132 percent of GDP). This could inject greater uncertainty into financial markets, including European banks, which could hit at the same time as the EM crisis takes a major downward plunge. A major Italian crisis would also raise further questions over the future of the euro. Here are prospects that French politics could get messy as the Macron government seeks to push through new economic reforms, while in Germany there are questions over how long Chancellor Angela Merkel will hold on at the helm of Europe’s largest economy.

The current EM crisis is happening around the periphery of major markets. As long as it hits frontier markets like Sri Lanka, Barbados and Pakistan, then it is not a major concern. Argentina and Turkey have gained some attention, but not enough to sway investors from entirely pulling out of EM . . . so far. The issue is going to be when the nagging shibboleths of doubt creep through the door of larger, more liquid names like Brazil, Mexico, Indonesia, and, dare we say, China (though by the time we recognize a crisis has occurred there we'll be looking in the rearview mirror due to the opaqueness of that country’s financial system).

Sadly much of this is ready in motion. It does not have to go this way, but tipping points are being reached—will Turkey will be willing to work with the IMF?; can the United States and China find common ground for a trade deal?; and will more market-friendly, non-populist candidates emerge in Brazil’s currently wide-open electoral contest? And Brazil is set to be quite the tinderbox of electoral heat, considering the trail of political corruption scandals, steep recession that it is finally climbing out of, and the recent fire that destroyed the National Museum. The electoral mood is angry.

It was Aristotle who is credited with saying the following, “The aim of the wise is not to secure pleasure, but to avoid pain.” There is a lot of potential pain out there in markets, in particular, Emerging Markets. We have been lucky in not having a major crisis for a lengthy period. The combination of low-interest rates from advanced economy central banks, the willingness of China to boost growth via stimulus (and pump a lot of money into developing countries around the world), and the Trump tax cut all functioned to advance and extend a global growth cycle. EM countries have benefited hugely from this. Now the ground is changing from underfoot as the means for growth are taken off the table, one by one. Perhaps we have had too much pleasure in the EM world; now it is time to focus on avoiding pain.