People Are Still Yearning for Independence in Barcelona 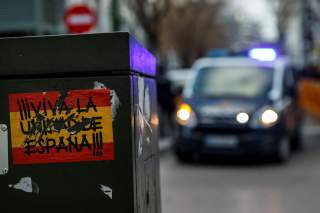 There are banners hanging below the windows of flats declaring: “The Spanish government killed our democracy, but it will never shut a Catalan’s mouth.” The estelada—the flag of Catalonian separatism—is everywhere. More often than not, Barcelonins walking on crowded streets such as La Rambla, the Avinguda Diagonal, or the Via Laietana wear a yellow ribbon on their clothing—a symbol not only of the independence movement but a quiet protest against the arrest of Catalan political leaders by Spanish authorities after last year’s October 1 independence referendum.

If the central government in Madrid thought the parliamentary elections they ordered for December 21 would somehow erase the spirit of independence in Spain’s second-largest city, it made one of the worst political misjudgments ever in recent Spanish history.

But in the days before and after the December election, growing doubts and fears deeply rooted in the decades-old conflict between Catalonia and Madrid emerged among voters, making them question whether they are for or against independence.

Deeply suspicious of a Spanish political system that they believe is racially and culturally biased against Catalonia, some Barcelonans question what Spain’s real agenda toward the Catalan people might be. There is skepticism about the value of the European Union to the ordinary person. And always—always—there are historical ghosts that still haunt Barcelona and all of Catalonia because of the legacy of a dead tyrant who still shapes Spanish politics to this day: Generalissimo Francisco Franco.

“There is more here at stake than the question of independence,” said Violetta Aquiar, an artist and photographer who voted for independence on October 1 and cast her vote for a pro-independence party during the December 21 parliamentary elections. “The Catalan movement questions the validity of the European Union—it hasn’t done a thing for us. It wants to bring to light the corruption of the Spanish government and their goal of silencing Catalans for good. It’s about a new society, not just a new country.”

When it comes to Catalonian independence, the results of the December 21 parliamentary elections are at best mixed.

Voters dealt the Spanish government a severe blow, backing three of the main pro-independence parties who won a total of seventy seats in the 135-seat parliament. The center-right, pro-unity Ciudadanos party won thirty-six seats, which makes it the majority party but also means it doesn’t have enough votes to counter a pro-independence coalition government.

But building that government will be a struggle. The Parliament of Catalonia is scheduled to meet on January 17, but one party leader, Oriol Junqueras, is jailed in Madrid on charges of sedition and money laundering. Carles Puigdemont, another party leader who is also the president of Catalonia who declared independence after the October 1 vote, is in self-imposed exile in Brussels and faces a Spanish arrest warrant. Legally, neither can be invested in parliament if they are not physically present for the ceremony. Both men were fired by the Madrid government shortly after the independence declaration.

In addition, it is unclear what the next step will be even if pro-independence parties can form a coalition government and pursue separation from Spain. Furthermore, neither the EU nor the United States recognized the independence vote last year, saying they will not intervene in the matter.

A city long known for its beautiful beaches and flocks of tourists, Barcelona has become the focal point of an independence movement that is drawing worldwide attention. Separatists in Scotland, Belgium and the Kurdistan region of Iraq are watching events there as they consider how they will move forward with their own political ambitions.

But to really understand the implications of the current Catalonian separatist movement, one needs to know the history underpinning politics in Spain today.

In 1931, Catalonia declared itself an independent state, only to have independence stripped from its people by the events of the Spanish Civil War. That war was one of the most violent of the twentieth century and its events echo in Spain to this day.

From 1937 to 1939, Nazi Germany and Fascist Italy ordered nearly 200 bombing missions against Barcelona, killing as many as 3,000 people and injuring many thousands more. Some historians consider the attacks the first examples of strategic bombing—aerial bombardment that purposely targets civilians and urban infrastructure to maximize suffering.

Not only did Hitler and Mussolini use Barcelona as a proving ground for their strategic bombers, but they sent troops and aircraft to support the fascist Nationalist cause during the Spanish Civil War at the invitation of the Nationalist military leader Francisco Franco.

Outside of Spain, Franco is largely the “forgotten fascist” of World War II. However, his legacy still casts a quiet but grisly shadow over aspects of Catalonian life and politics.

Spain’s military dictator from 1939 until his death in 1975, Franco’s treatment of Barcelona and the Catalan people was hideous. Starting in 1940, he ordered purges of anyone or any group he considered political enemies or “Reds”: anarchists, republicans, intellectuals, feminists and those who simply displeased the regime. They were frequently tortured before execution. Most were shot. Some were condemned to death by garrote. Bodies were dumped in mass graves, the most notorious called Fossar de la Pedrera, an old quarry near the Montjuic Castle military prison. Numbers vary, but estimates range from 35,000 to 50,000 victims.

One of the victims was Lluís Companys, the president of independent Catalonia during the Spanish Civil War. Fleeing to France after the fascists won the Civil War, he lived there in exile until he was arrested by the Vichy government and handed over to the Nazis for extradition back to Spain. Court-martialed and condemned to death by firing squad, the Franco regime listed his cause of death as “traumatic internal haemorrhage.”

There was also political repression. Barcelona had been the Republicans’ capital during the Spanish Civil War. The Catalonian independence movement was a thorn in the side of Fascist Spain from the 1930s onward.

“Catalan nationalism is a disease that must be eradicated,” said Ramón Serrano Suñer, Franco’s foreign minister and brother-in-law. “The Catalan people are morally and politically sick.” The Franco regime banned the public use of spoken Catalan. City, town and street names were changed to Spanish. The thriving Catalonian publishing and media industry was nearly destroyed. Thousands of teachers were fired from schools and replaced with ideologically reliable hacks. If a Catalan was caught reading a book in his or her language or speaking the mother tongue, gangs of soldiers or police would beat the offender to a pulp. Through the 1960s, anyone attempting independent political organization or opposition to the regime faced the same treatment—or worse.

In the name of Franco’s calls for “unity” and “a Christian Spain,” Barcelona was transformed from a thriving, outward-looking city interested in culture and progress into a drab, terrified industrial metropolis where people without the right political connections couldn’t find a job or enough to eat. Many of them were women—forcing single mothers desperate to feed their children to turn to prostitution in order to survive. Parts of working class Barcelona didn’t recover from the war until the 1960s. Some places bombed out or destroyed during the Civil War were purposely left in ruins under orders from Franco as a warning to “the Reds.”

The older generation of Catalans today came of age during the Franco years, including many leaders of the independence movement. Some younger people grew up with stories from parents and grandparents regarding the hardships suffered under the Franco regime. In a nation that still can’t settle what the national narrative regarding Franco should be, Catalonia stands out from the rest of Spain in its efforts to forthrightly acknowledge Francoist horrors through efforts ranging from public school curriculum to government-established monuments.

So, when the National Police Corps and the Guardia Civil under orders from Madrid thrashed Barcelona voters with billy-clubs during the October 1 independence referendum, many Barcelonins said the central government had turned the clock back to 1939. Leader of the majority Partido Popular (PP) and Spanish Prime Minister Mariano Rajoy publicly thanked the police forces who attacked voters, praising them for “upholding the law.”

“When the government from Madrid sent all these thousands of police into Catalonia to impede the referendum, it was like the pendulum of history swinging back to the old times of violence and repression,” said Sara Defilló, a Barcelona entrepreneur. “Older generations like my father sensed the vestiges of Franquismo coming back. It was a like a bad trip backwards to the past.”

When independence leader and Catalonian president Carles Puigdemont fled to exile in Belgium after Madrid dissolved the Catalan Parliament and issued a warrant for his arrest, there were obvious comparisons to the story of Lluís Companys.

“What Madrid did to us left a bad taste in the mouths of many,” said Sebastian Olla, a Barcelona cab driver. “It was too much like the old days when you just made your political enemies go away.”

And when Rajoy’s hand-picked troubleshooter for the independence crisis Soraya Sáenz de Santamaría told a December 16 campaign rally for a PP parliamentary candidate in the Catalonian town of Girona that the prime minister and the PP had rendered the independentistas “headless,” she did more than raise a few eyebrows with what followed.