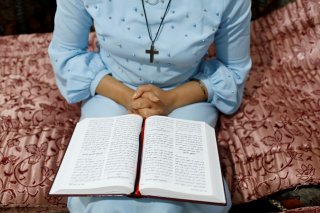 “More Muslims have come to faith in Jesus Christ over the last thirty years—and specifically over the last seven to ten years—than at any other time in human history,” wrote Joel Rosenberg in 2008, and the pace has intensified since then. Uwe Siemon-Netto confirmed in 2016 that “a global phenomenon is underway: Muslims are converting to various Christian denominations in droves in every part of the world.” Indeed, Christian missionaries have even coined a name and an abbreviation for them: Muslim-background believers, or MBBs.

Historically, nearly all conversions involved Christians becoming Muslim, not the reverse. Islam has for 1,400 years been the “Hotel California” of religions (“You can check-out any time you like, But you can never leave”), as it prohibits adherents from either declaring themselves atheists or members of another faith, which from the Islamic point of view amount to the same thing. This attitude goes back to the religion’s origins (a Hadith quotes Muhammad, “Whoever changes his religion, kill him”) and the sense that leaving Islam is akin to joining the enemy and, thus, equals betrayal. Additionally, to live as a proper Muslim has a powerful social aspect, participating in the maintenance of communal solidarity.

Accordingly, apostate Muslims everywhere face rejection by their families, social ostracism, and loss of employment; in Muslim-majority countries, additionally, their governments may well persecute, imprison, torture, and kill them. Skeptical Muslims historically have therefore overwhelmingly stayed within Islam’s boundaries; even new religions deriving from Islam (the Druze, Nusayri/Alawi, Alevi, Babi, and Baha’i) initially do the same and long retain a murky relationship to it. The pattern still holds today, for example, with Interuniversal Mysticism (Erfan-e Halgheh), a new-age version of Islam founded in Iran by Mohammad Ali Taheri.

As a result, historically only a trickle of Muslims became Christians. One accounting, by Church historian David Garrison, finds 5 movements of Muslims to Christianity prior to the twentieth century and 69 such movements in just the first 12 years of the twenty-first. At least some of the first 5 movements occurred under duress or to gain a specific benefit. Most prominent of the former were the Moriscos in sixteenth-century Spain, pressured to convert by their Catholic rulers. On rare occasions, whole communities have converted to gain advantages, as I have previously explained:

In seventeenth-century Russia, a regulation prohibiting non-Christians from owning serfs led to the conversion of rich Tatars, including the ancestors of such luminaries as the musician Sergei Rachmaninoff, the poet and historian Nicholas Karamzin, and the novelist Ivan Turgenev. Around 1700, some ruling families among the Sunni Muslims in Lebanon converted to Christianity to increase their political standing.

Egypt’s rule over Syria in 1831-41 was a time of mass conscription when “every eligible Syrian Muslim was recruited to the Egyptian army.” Yvette Talhamy explains:

This was not welcomed by the local population. … While some Syrians chose to flee the country or maim themselves in order to avoid conscription, others turned to the missionaries and declared their willingness to profess Christianity, since Christians were exempt from conscription in exchange for paying an exemption tax. The American Protestant missionaries were flooded with requests to accept Druze and others into their church.

(Sadly for the converts, this ploy failed, for they were conscripted “regardless of whether their conversion was real or feigned.”)

The same disinclination held until recently. Visiting Sudan in February 1972, I stayed with an American missionary who had lived in Khartoum for twenty years, teaching and discreetly holding Sunday services. But he won only five converts in all that time, or one every four years. Similarly, in a 1984 book, Ten Muslims Meet Christ, an American missionary tells the story of the meager results of missionizing in Iran.

MBBs can be notoriously difficult to quantify because of their discretion and even dissimulation. Still, some startling estimates exist. Duane Alexander Miller and Patrick Johnstone estimate the total number of MBBs in 2010 at nearly 10 million, marking a 50-fold increase over the fewer than 200,000 converts of fifty years earlier. Reports of widespread conversions of Muslims to Christianity come from regions as disparate as Algeria, Albania, Syria, and Kurdistan. Countries with the largest indigenous numbers include Algeria, 380,000; Ethiopia, 400,000; Iran, 500,000 (versus only 500 in 1979); Nigeria, 600,000; and Indonesia, an astounding 6,500,000 (due to unique circumstances). According to Andrew van der Bijl and Al Janssen, there are “even Christians in Medina and Mecca.”

In Egypt, a Coptic source informs me, “great numbers of Muslims converted to Christianity after the 2011 uprising and the Muslim Brotherhood coming to power. The Coptic Church called Islamist President Mohamed Morsi the ‘great evangelist’ and stopped counting the converts. Go to any church and you’ll almost certainly find former Muslims, especially women, attending.”

Most dramatically, in a much-cited December 2000 interview on Al Jazeera television, the director of Libya’s Companions’ Lighthouse for the Science of Islamic Law (‏منارة الصحابة للعلوم الشرعية, Manarat as-Sahaba li’l-`Ulum ash-Shar`iya), Ahmad al-Qat‘ani, stated without evidence that 6 million Muslims convert to Christianity each year. He reported that the Muslim population of Africa had gone from over half to just one-third and raised the prospect of Islam disappearing from sub-Saharan Africa. Perhaps he exaggerated for fundraising purposes, but his numbers have had wide circulation.

MBBs also live in the West, with the United States hosting by far the most (450,000) and Bulgaria the most in Europe (45,000). Since 2014, Liverpool Cathedral has hosted a weekly service in the Persian language (called “Sepas”) led by a deacon of Muslim origins; the Anglican bishop of Chelmsford, England, is an Iranian-born daughter of a convert. Muslim conversions increased the size of Berlin’s Evangelisch-Lutherische Dreieinigkeitskirche congregation from 150 to almost 700 in just two years. New institutions have been founded, such as the Pars Theological Centre in London, which since 2010 exists “to equip and mobilize the Iranian church by training a new generation of servant leaders to lead the church and transform the Persian-speaking world for the glory of God.”

Vague and divergent numbers suggest that while no one has a good idea of the number of Muslims converting to Christianity, the magnitude is large. Christians celebrate this phenomenon; Joel Rosenberg exalts that “the Church is being truly resurrected in the lands of its birth.”

Duane Miller notes that “Christ’s converts from Islam are often driven away from Islam as much as they are drawn to Christ or Christianity.” Focusing here only on the factors that propel Muslims specifically toward Christianity finds the list to be long.

Dreams and visions, especially of Jesus, probably draw about a quarter of MBBs. Mike Ansari, an Iranian convert, reports that many people “are actually having dreams and visions about a shining man dressed in white far before we are out there telling them about Jesus.” Dabrina Bet Tamraz notes that Iranian converts often ask each other, “Have you seen the white[-robed] man, have you seen Jesus?” The leader of a Presbyterian church in Pakistan found that Afghan imams were traveling hundreds of kilometers to study the Bible with him. When asked what prompted them to do so, the minister replied: “Dreams! Christ had appeared to them in their sleep and instructed them to come here to hear the truth.” And in Colorado, Pastor George Naeem who conducts classes in Arabic via the radio and the Internet reports that “Virtually all [his students] came following dreams.”

Michael Stollwerk tells of the time after a service at the cathedral of Wetzlar north of Frankfurt: “I stood at the exit, still vested, bidding the worshipers goodbye when a veiled woman approached me. I fumbled through a slit in my robe for my wallet, thinking she was a beggar. ‘No, no,’ she said. ‘I only have a question: Are you the imam here?’ I answered: ‘Well, in a way I am – I am the pastor.’ She went on: ‘In that case, you are the right man. God commanded me in a dream to go to the big church on the market square and ask the imam for the truth’.” She was baptized several months later. Siemon-Netto, who recounts these stories, goes on:

Next, I heard of similar episodes from a Lutheran theologian whom imams visited through his back door in the middle of the night in Egypt for the same purposes; I heard it from a Catholic missionary who had worked in Algeria, from a Baptist whose surprise visitors told him that Christ had appeared to them in their tents in Saudi Arabia. An Anglican priest spoke of hundreds of Persian women attending secret Bible studies in Tehran following dreams. Pastor Gottfried Martens in Berlin estimated that at least two-thirds of his Persian and Afghan converts had followed the instructions of a “figure of light” identifying himself as the Jesus of the Christian Bible and not the “Isa” of the Koran.