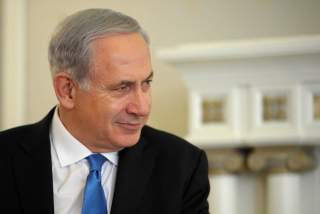 One of the late Irving Kristol’s few edicts when it came to the National Interest magazine was that it shouldn’t publish anything that could be construed as anti-Israel. So Weekly Standard editor William Kristol was quite right when he announced at the American Enterprise Institute’s dinner, where over a thousand gathered last night at the National Building Museum to celebrate the ties between Israel and America, that his father would have been more than pleased to see an award in his own name bestowed upon Israeli Prime Minister Benjamin Netanyahu. For his part, Netanyahu also graciously expressed his own admiration for the Kristol clan, noting that he had recently read the redoubtable Gertrude Himmelfarb’s The People of the Book, which discusses the tradition of philosemitism in England. Himmelfarb, who was at the dinner, must have been pleased by the laudatory words.

Not everyone, however, was happy with this neocon conventicle. Writing in the Washington Post before the event took place, for example, Dana Milbank complained:

Now, as Netanyahu visits the United States, he decided to accept, on the same day he met Obama in the Oval Office, an award from a group of neoconservatives at the American Enterprise Institute who applaud his stand against the Obama administration. The acceptance of the award, which has previously gone to, among others, Dick Cheney and Antonin Scalia, led the Atlantic’s Jeffrey Goldberg to conclude that “Netanyahu has decided to troll Obama.”

Actually, I think Netanyahu took a different course last night. When AEI’s Danielle Pletka interviewed him onstage, she skillfully covered a good deal of ground but avoided some neuralgic topics. If I heard right, the word “settlements” was never uttered. Netanyahu was pretty careful not to dwell on his meeting with President Obama and made no sniping comments about it. Netanyahu also responded to Pletka’s question about Syria with a cogent answer: he had traveled to Moscow to meet with Russian president Vladimir Putin to work to avoid any inadvertent collisions between Russian and Israeli plans and he said he laid down what constitute his own red-lines in Syria. No attacks from Syria on Israel; no transfer of game-changing weapons to Lebanon; and no transformation of the Golan border into a staging ground against Israel. Netanyahu also complacently noted that the old verity that upheaval in the Middle East centered on an unresolved Israel-Palestinian conflict had been upended by the current chaos in the region.

But things got really interesting when Pletka observed that a number of foreign policy mavens are asserting that authoritarian regimes can usefully serve the cause of stability. Netanyahu veered off-message, at least according to current neocon orthodoxy. He referenced Jeane Kirkpatrick’s famous essay in Commentary called Dictatorships and Double Standards. He essentially said, without directly pointing the finger at the George W. Bush administration, that when it came to greater and lesser evils, Saddam and Gaddafi were rogues, but not messianic ones like the fanatics in the Islamic State. If you’re intent on painting Netanyahu as a neocon, then I guess you’d have to say that he is a first-generation one: closer in spirit to Irving Kristol and Jeane Kirkpatrick, who looked at nation-building and the like with skepticism, than to a younger generation. His remarks were a reminder why Israeli government officials were never gung-ho in 2003 on ousting Saddam, in contrast to the Bush administration.

Of course there are more points of coincidence than not between Netanyahu and the neocons, ranging from the famous “Clean Break” paper in 1996, led by Richard Perle (who was in attendance last night, as was former vice president Dick Cheney) to the strictures about Iran. One neocon chum of mine even called the festivities last night a “Perle Jam,” given the number of true believers that were present.

Still, it speaks for the neocons that they continue to muster the numbers that they do. They remain the dominant foreign policy force in the Republican party. Last night’s sleekly glittering event with Netanyahu helped to show why that is the case.