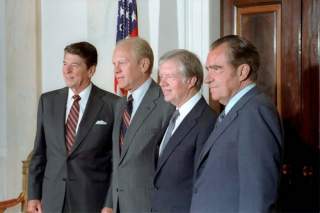 ON A SWELTERING Monday in August 1976, delegates began to arrive at the Kemper Arena in Kansas City, Missouri, for the start of the Republican National Convention. Unlike today’s tightly scripted party conventions, which have become little more than four-day infomercials, the outcome of this convention was in serious doubt. The presumptive nominee was President Gerald Ford, who had assumed the office only after the resignations of Spiro Agnew and Richard M. Nixon. His challenger was Ronald Reagan, the conservative former governor of California, who could seize the presidential nomination by winning over a comparative handful of uncommitted delegates. It was a moment of high and historic drama. As Rick Perlstein relates, when the delegates arrived at the arena, they were to be greeted by “what was supposed to be a stirring sight”: a fifty-foot, 1,500-pound inflated elephant soaring overhead. Unfortunately, in “classic 1970s fashion,” the beast’s stomach had been accidentally punctured by its rigging and it now wallowed limply in the parking lot.

The American public imagination has long preferred to overlook the 1970s, seeing it mainly as a regrettable decade marked in hindsight by embarrassments that were both national (Watergate, stagflation, the oil crisis) and personal (disco, leisure suits, bell-bottom pants, quaaludes, ridiculous hairstyles). Many historians, however, recently have proclaimed its importance as the period in which the conservative movement gained strength, giving rise to neoconservatism as well as the religious Right, and culminating in 1980 with the election of the most conservative president since Calvin Coolidge. Now Rick Perlstein has added to that historical literature with The Invisible Bridge, his retelling of the period between Nixon’s 1972 reelection and Reagan’s challenge to Ford in 1976.

Perlstein is a talented but erratic writer. Emerging from a background in journalism that included a stint at Lingua Franca, he entered the ranks of best-selling historians with Before the Storm: Barry Goldwater and the Unmaking of the American Consensus and Nixonland: The Rise of a President and the Fracturing of America. In all of his books, Perlstein has attempted to chronicle the rise of modern conservatism through a biographical focus on its emblematic leaders. He also seeks to convey the feel and flavor of the period through a sprawling mass of incident and detail. Unfortunately, all of this history is filtered through a New Journalism writing style that is more annoying than stimulating.

The New Journalism that came into being in the 1960s and 1970s with the work of writers like Tom Wolfe, Hunter S. Thompson and Joan Didion was an attempt to expand the possibilities of journalism by borrowing some of the techniques of novelists. Perlstein partakes of this tradition principally through his hyperactive prose style. He deploys peppy phrases—helicopters “swoffed,” pundits become “chin-stroking penseurs,” hotels “were putting on the dog”—and makes frequent resort to italics, capital letters, one-sentence paragraphs, mantra-like repetition, sentence fragments, grammatical solecisms, odd mashups of tense and other writerly pirouettes. He continually inserts himself into the narrative with sarcastic asides that make reading the book akin to watching an episode of the cult television show Mystery Science Theater 3000, in which the movie onscreen is drowned out by its wisecracking spectators.

PERLSTEIN’S SPASTIC WRITING detracts from the historical material he presents, which can be captivating. The period from 1973 to 1976 was one in which “America suffered more wounds to its ideal of itself than at just about any other time in its history.” These included the U.S. withdrawal from Vietnam and the subsequent collapse of its South Vietnamese ally, the shocking revelations of Watergate, congressional investigations into unsavory intelligence operations, and the economic privation produced by the Arab oil embargo and stagflation—not to mention the afflictions of crime, terrorism and urban decay.

Perlstein tells a tale of a divided and unhappy society through vignettes about the return of prisoners of war from Vietnam, demonstrations against skyrocketing food prices, the Watergate hearings, Patricia Hearst’s kidnapping and participation in the crimes of the Symbionese Liberation Army, and growing public interest in UFOs and the occult. He describes the success of morally bleak films (like Death Wish and The Parallax View) and blockbusters (like The Exorcist and Jaws), along with scares over acid rain and killer bees. He also covers the rise of self-righteous “Watergate baby” Democrats as well as conservative antibusing protests in South Boston and antitextbook protests in West Virginia.

This is hardly a comprehensive history; it barely touches on the music, art, fashion and literature of the period, or phenomena such as the founding of Microsoft and Apple, immigration, deindustrialization, a growing assertion of ethnic identity and the rise of supply-side economics. But even for people who know the history of this period fairly well (or who lived through it), the book contains lots of surprises. Who knew that the first message passed through “tap code” by Vietnam POWs was “Joan Baez sucks,” or that one of Nixon’s advisers suggested that Americans compensate for higher meat prices by dining on offal? Would an eBay search turn up a “Watergate Scandal” card game (“No one wins, there are just losers”)? Did a Washington Post columnist seriously propose that an appropriate response to the energy crisis would be to impose a speed limit on car racing at the Indianapolis 500? Did theaters showing The Exorcist really keep kitty litter on hand to soak up audience vomit? Did daredevil Evel Knievel make his ill-fated jump attempt over the Snake River Canyon on the same day that Ford pardoned Nixon?

But the narrative suffers from Perlstein’s desire to squeeze the era into a procrustean analytical framework. He posits that the stresses of the mid-1970s split American society into two tribes. One was the “suspicious circles,” made up of those who felt that realism and a higher patriotism now required Americans to “question authority,” overturn outdated morality, come to grips with the world’s complexity, and accept uncomfortable truths about the dark aspects of America’s history and the fallibility of its leaders. The other was made up of those who continued to believe that America was “God’s chosen nation” and who nostalgically yearned for heroes, simplicity, comforting myths and a return to national innocence.

Perlstein leaves little doubt that he’s on the side of the “suspicious circles.” The Watergate controversy, he tells us, was “a battle over the meaning of America,” pitting rule-of-law idealists against the majority of Americans, who apparently wanted to suspend the First Amendment to end disruptive protests and “who believed, with Richard Nixon, that our neighbors might be our enemies, and our enemies might destroy us.” Those in the “suspicious circles,” conversely, felt “that all that turbulence in the 1960s and ’70s had given the nation a chance to finally reflect critically on its power, to shed its arrogance, to become a more humble and better citizen of the world—to grow up.” Perlstein laments that the reactionary innocents won the battle, as now even Democrats like Barack Obama praise America as “the greatest nation on earth” and an exception to history. “What does it mean to truly believe in America?” Perlstein asks rhetorically. “To wave a flag? Or to struggle toward a more searching alternative to the shallowness of the flag-wavers—to criticize, to interrogate, to analyze, to dissent?”

For all Perlstein’s desire to spur debate, however, his suspicion-versus-innocence framework is too muddled and historically inapt to hold any real contemporary resonance. The reader’s own suspicion grows that Perlstein’s motive is not so much to explore the 1970s in all their complexity as to expose the villains who forced America into its alleged contemporary cult of optimism and willful blindness to national faults—and, unsurprisingly, he finds nearly all these moustache-twirlers on the conservative side.

But even a casual viewer of Fox News will know that today’s conservatives are simultaneously critics and boosters of America, fearful of its big government and deeply suspicious of its politics and culture while in the same breath maintaining that it is still the envy of the world. Liberals, too, mix censure and approval in their views of the country and its history. Americans of all political stripes are, in Perlstein’s terms, both innocents and skeptics in various measures. Their views of government and American institutions are informed by a complicated blend of partisanship, the performance of those institutions, personal experience, media exposure and historical events such as the attacks of September 11, 2001. Americans in decades past held equally complicated and sometimes contradictory views. Any attempt to treat them as political naïfs, as Perlstein does, reveals what historian E. P. Thompson termed “the enormous condescension of posterity.”

THIS IDEOLOGICAL agenda makes Perlstein an unreliable narrator—incapable, for example, of attempting any objective evaluation of a complicated historical figure like Richard Nixon. Perlstein is content to present Nixon, largely through the lens of Watergate, as a black-hearted conservative malefactor and two-dimensional doer of dastardly deeds. But this is a tired and indeed anachronistic interpretation that serious historians haven’t held for decades. Any fair historical accounting of Nixon’s presidency also has to consider his achievements in statecraft, his progressive record on issues from the environment to the arts to Southern school desegregation, and his masterful ability to balance different factions of the Republican Party.