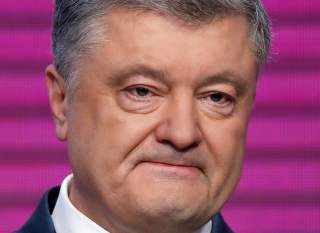 Petro Poroshenko lost the Ukrainian presidential elections by a larger margin than any candidate in the history of Ukraine. He won in only one region of the country. His opponent, a comedian with no political experience, received more votes than any candidate in Ukrainian history. Why, after five years of policies that had the full political and financial backing of the West, did the Ukrainian people reject him by a three-to-one margin?

The answer lies in the anti-Russian policies that he and the Ukrainian parliament have pursued these past five years. These include restrictions on the usage of the Russian language, on travel to Russia, on trade with Russia, on any social contact with Russians, even those who clearly oppose Putin and support Ukraine. That there would be political blowback for this was entirely predictable, given that city dwellers in Ukraine more commonly speak Russian, and half of the country has relatives across the border. The writing was on the wall for Poroshenko when an annual poll earlier this year showed that popular sympathies for Russia among Ukrainians were now higher than at any point since May 2014.

Poroshenko, nevertheless, continued to pursue a nationalist ideology, rescinding the rights of regions to use any language other than Ukrainian, ending instruction of Russian in schools after the fifth grade, even seeking to disestablish the Ukrainian Orthodox Church and replace it with a more politically loyal and nationalistic church. The result, predictably, has been a slow but steady rise in the resentment of people in the Russophone regions, which manifested itself in an unexpectedly high turnout in this presidential election. Though scarcely noted in all the excitement over Vladimir Zelensky, it is worth underscoring that, had the Opposition Bloc fielded a single candidate instead of three, then that candidate would have likely beaten Poroshenko in the first round, leaving Ukrainians with a final choice between two allegedly pro-Russian candidates.

Of course, the country’s economic collapse, cuts in social services, and nine-fold hike in the price of gas heat, all contributed to Poroshenko’s unpopularity, but they were not the deciding factors. The division of Ukrainians into “true patriots of Ukraine” and a mythical “fifth column” that supports Russia was always Poroshenko’s distinctive calling card, and he used it frequently to explain away the country’s growing social and economic problems. Indeed, his campaign billboards showed him facing-off not with his challengers, but with Vladimir Putin. Leading up to the first round the attending caption was “Its either Poroshenko or Putin.” In the run-off, it became “April 21st—The decisive choice.” Given only two options by their president, the Ukrainian people made their choice.

What lessons can Western policymakers learn from Poroshenko’s crushing defeat? First, that popular sympathies for Russia among Ukrainians are not likely to decline any time soon. Indeed, barring open warfare, we may have seen them at their lowest point. If the conflict in Eastern Ukraine is ended, and normal trade and political ties are restored, then the political and economic influence of Russophone Ukraine will inevitably rise, as will sympathy for Russia. This is the single most important reason why Poroshenko opposed the full implementation of the political reforms agreed to in the Minsk II Accords.

Second, the West’s strategy of backing one region or faction in its bid to capture and reshape the direction of the whole nation has been no more successful in Ukraine than it has been in Syria, Iraq, or Afghanistan. It is always morally questionable to promote divisions in a country in order to foster regime change. In the case of Ukraine, however, there is an added disadvantage. As Ukraine’s neighbor, speaking the same language and sharing the same cultural heritage, Russia exerts a soft power cultural influence that no other country can match. If proof was ever needed, then the electoral map of Poroshenko’s sweeping defeat provides it.

To be clear, Zelensky is not really Putin’s puppet. His appeal lies in the fact that he is not committed to the nationalist ideology that Poroshenko exemplified. This is at once his greatest source of popular support, and his greatest political weakness. For the rest of 2019 he will be forced to work with a Ukrainian parliament whose nationalistic composition has not changed since the heyday of the Maidan movement. Though its popularity as an institution has long been in the single digits, most observers see it clinging to power through November, and pushing through as much nationalistic legislation as it possibly can in its last days. The first such law, which comes up for a vote later this week, will expand the mandatory use of the Ukrainian language. As president-elect, Zelensky is already facing his first political challenge. While he may have no power to stop this law, his supporters will doubtlessly blame him for it after it is implemented.

Nicolai N. Petro is Professor of Politics and Silvia-Chandley Professor of Peace Studies and Nonviolence at the University of Rhode Island. He writes frequently about Russia and Ukraine. His latest book, Ukraine in Crisis, was published by Routledge in 2017.