Petro Poroshenko's REAL Problem (And It's Not Russia) 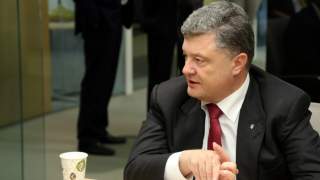 Never one to miss an opportunity to point fingers westward and score political points, Vladimir Putin on Thursday used the recent killings of pro-Russian public figures in Ukraine to scold Kiev and its allies. Whereas the murder of Russian oppositionist Boris Nemtsov in Moscow is being solved, he said during a four-hour call-in show, “In Ukraine, which is laying claim to the status of a democratic state and is seeking to become part of a democratic Europe, we are seeing none of this. Where are the killers of these people? There is no sign of them...Both Europe and North America choose to turn a blind eye to this.” Such cynicism and obsessing over foreign enemies is what we expect from Putin. What was troubling was how similar Ukrainian president Petro Poroshenko’s reaction to the murders was. “It is evident that these crimes have the same origin,” read Poroshenko’s official statement. “It is a deliberate provocation that plays in favor of our enemies. It is aimed at destabilizing the internal political situation in Ukraine and discrediting the political choice of the Ukrainian people.” In other words, these crimes are the work of foreigners seeking to undermine his government, not evidence of dangerous tendencies within the country.

Ukrainian officials have presented no evidence as to who is behind these murders, but Poroshenko, like Putin, has used them to remind people about external threats and distract from serious internal problems. Of course Poroshenko has a stronger argument than Putin. Russia has forcibly taken land from Ukraine and may still take more, while the West has yet to attack Russia. Still, just as Putin solves nothing by blaming everything the West, Poroshenko solves nothing by blaming everything on Russia. The war Russia started in Ukraine’s east has done much to exacerbate the country’s existing divisions, radicalize it and make its politics more violent. But these problems are chiefly domestic ones, and by not acknowledging them as such, Poroshenko is missing an opportunity to address them. And it is these problems, not Russian aggression as such, that will present the biggest threat to Ukrainian democracy and statehood.

Ukraine has had a string of opposition figures die in 2015. Between late January and early March, seven former officials associated with deposed President Viktor Yanukovych died in apparent suicides, but many suspect they were murdered. Then this week, Oles Buzina, a pro-Russian journalist, Oleh Kalashnikov, a former member of parliament from Yanukovych’s political party, and Sergey Sukhobok were shot and killed. On Friday, Kiev political analyst Volodymyr Fesenko wrote on his Facebook page that he had received a letter from a group called the Ukrainian Insurgent Army (UPA) claiming responsibility for the murder of Buzina and Kalashnikov and for three of the seven “suicides.” UPA, incidentally, was the name of the Ukrainian partisan paramilitary force that fought Soviet and German armies in the 1940s, suggesting Ukrainian nationalists were taking credit. For Fesenko, this letter proves what he had believed all along about the murders: that Putin did it. “This strengthens my suspicion that Russia’s secret services are behind these people (although the actual murderers may not even know it),” he wrote. “Even if these people…believe they are ‘Ukrainian patriots,’ objectively they are acting in the interests of the external enemy . . . .” Earlier, Fesenko had suggested that Russia’s intelligence services had planned the murders to give Putin something to talk about during his call-in show. "It's as if the proof of political terror in Ukraine was specially delivered to him. These are ritualistic victims for Russian propaganda, although they did not play any serious role in the opposition movement," he told Reuters.

Of course we do not know if the note Fesenko received is genuine, or who committed these murders, or how many were actually murders, as opposed to suicides. We do know, though, that Ukraine has a serious problem with radical politics and politically motivated violence and that these problems are greatly exacerbated by the war in the east. Unable to raise an army sufficient to fight the Russian-backed separatist movement, the government has relied on nationalist paramilitary groups to do a good part of the fighting. While this strategy may be a necessity, it does raise questions about the government’s ability to control these groups or even to defend itself from them, should it need to. Last fall, right-wing protesters clashed with police outside the parliament building, and this spring, the Dnipro-1 paramilitary group briefly took a state-owned oil company as part of dispute between the government and the oligarch Igor Kolomoisky. The war has also sparked proliferation of weapons in Ukraine, with gun violence on the rise across the country. Beyond the dangers posed by paramilitary groups and freely available arms, the war has seriously aggravated divisions within Ukrainian society between those who feel culturally or linguistically closer to Russia and those who are more oriented toward western Europe. As these recent killings would seem to show, these divisions can be deadly even outside of areas where the war is being fought.

If basic rule of law and tolerance for dissent are not observed, what chance does Ukrainian democracy have? Therefore, it is in Poroshenko and Ukraine’s interest to see that the fighting in the east stops for good, even if it means the country de facto loses control of that territory, at least temporarily. If such a loss proves to be part of the price Ukraine pays for a functioning democracy, it will be well worth it. It is also in the interest of Poroshenko and his supporters to not misdiagnose political violence and radicalism as a purely foreign import or as something that hurts the country only to the extent that it discredits the current government. As Ukrainian sociologist Volodymyr Ishchenko put it, “In this twisted logic the far right are criticized first of all for putting their partisan interests above Ukraine’s national interests. In other words, they are criticized not for being anti-democratic, reactionary, xenophobic and for propagating discriminatory ideas, but for not being nationalist enough.”

Just as there is a troubling symmetry between Poroshenko’s and Putin’s reactions to recent political violence in Ukraine, there is a broader symmetry to the crises the two leaders’ are facing. Putin came to power in large part thanks to his role in quelling separatism in Chechnya, invoking the threat of the country fracturing and, more recently, foreign interface to justify anti-democratic government, all while largely failing to address a mounting domestic economic crisis. Poroshenko has spent his first year in power fighting separatism and foreign interference and at times using these threats to distract from serious domestic problems. If he truly wants to move his country toward democratic Europe and away from Putin’s Russia, both politically and geopolitically, he’d do well to stop using Putin’s playbook.

Raymond Sontag is an adjunct Senior Fellow at the Center for The National Interest.