Playing the Long Game With the World’s Arab Countries 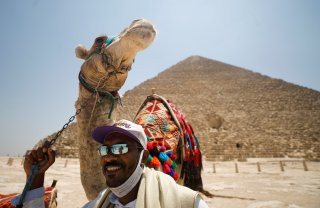 Managing the U.S. disengagement from Afghanistan is the top foreign policy priority of the country until it evacuates all American citizens and Afghan partners who want to leave. Once that monumental task is complete, President Joe Biden and the most senior members of his national security team will resume their focus on Asia. Therefore, the responsibility to make sure that U.S. interests in the Middle East and North Africa are protected and U.S. values are promoted will fall on others in the administration. In practice, these officials will need to concentrate their efforts on not just what is urgent, but also what is important—as difficult as that may be.

Recent developments in Afghanistan have taught America that it must properly calibrate its engagement with other countries when helping them to improve conditions. Following the Taliban’s triumph, America risks over-correcting by figuratively throwing up its hands and walking away. That approach didn’t protect our interests following the Soviet withdrawal from Afghanistan and won’t be any more successful now. Recognizing U.S. limits should not be a recipe for neglect. That would be the wrong lesson to draw from the Afghanistan debacle. America’s power and influence—when channeled realistically—are still considerable.

The appointments of Special Envoys for Yemen and Iran early in the administration indicate its two top priorities for the Middle East. In the spring, the administration also successfully navigated the most recent conflict between Israel and Hamas. The United States must now carefully follow the trajectories of other countries in the region because demands for change will undoubtedly intensify as the pandemic is contained. Rampant corruption, poor governance, and stagnant economies continue. Those realities will motivate more demonstrators to take to the streets.

It is striking how the factors that sparked the Arab Spring a decade ago continue unabated in the Middle East and North Africa. To cite four major drivers of those popular uprisings:

Demographics:  There continues to be a sizable youth bulge in the region, where a majority of the population is under the age of twenty-five.

Economic downturn, poverty, and inequality: Arab Spring protests came in the wake of the 2008–09 recession; the pandemic has had a similarly devastating effect on the global economy (and, in turn, on the economies of the Middle East and North Africa). The level of poverty in the region is higher than generally understood, and the region has the most unequal distribution of wealth.

Corruption: As Transparency International reported earlier this year, the pandemic and resulting emergency measures have set back anti-corruption efforts by years.

Repression: Political repression in the Middle East and North Africa has only intensified over the last decade.

Societal transformations are sure to materialize once the effects of the coronavirus pandemic recede. These changes will inevitably affect U.S. interests. U.S. statecraft, therefore, needs to move beyond reacting to crises in the Middle East and North Africa. It needs to devote thought and resources to anticipate these changes and—when feasible—support them if they align with U.S. interests and values. Patience and strategic thinking go hand-in-hand but don’t often rank high on the list of American traits. Nevertheless, U.S. policymakers must play the long game.

The administration’s initial actions have been promising. Biden’s budget proposal included a 12 percent increase for the State Department and the Agency for International Development (USAID), with a focus on expanding their capacity.  We need more diplomats and development experts to promote our interests, and expertise takes years to build.

In her confirmation hearing, USAID Administrator Samantha Power cited four challenges facing the world:  the pandemic, climate change, conflict and state collapse, and democratic backsliding. Notably, she explained that “democracy, rights, anti-corruption, and governance programming must nimbly support democratic and civil society actors as they push back against creeping authoritarianism and seek to build lasting democratic institutions.” Endemic corruption and poor governance were two catalysts of the Arab Spring uprisings.  They continue to motivate popular protests and discontent throughout the region and underscore the importance of USAID Administrator Samantha Power’s vision for USAID.

The agenda for the December 9–10 Summit for Democracy that Biden announced on August 11 is not yet public but should include how democracies can support societies in transition. Tunisia (where President Kais Saied has recently assumed emergency powers through extra-legal means) and the Palestinian Territories (where a generational shift in leadership is likely to take place sooner as opposed to later) are two prominent candidates for such support. Indeed, the December summit will be a test case for the international burden-sharing that Power called for in her confirmation hearing.

Crisis management and intense efforts to resolve age-old conflicts—hallmarks of U.S. diplomacy in the Middle East and North Africa​​—are necessary but not sufficient for advancing U.S. interests. To do so successfully in a changing international system, the United States should focus its efforts on improving the everyday lives of average citizens in the region. As a forthcoming report by the Center for American Progress underscores, “U.S. diplomacy will prove more effective when it links efforts to improve the economic, social, and political conditions of the people of the region to diplomatic progress.”

Gordon Gray is the chief operating officer at the Center for American Progress.  He was a career Foreign Service officer who served as U.S. ambassador to Tunisia at the start of the Arab Spring and as deputy assistant secretary of state for Near Eastern Affairs.  Follow him on Twitter:  @AmbGordonGray.