Playing for Their Lives: How a 2001 Video Game Is Feeding Venezuela 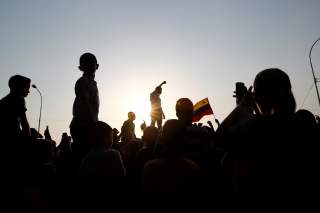 Years of economic mismanagement in Venezuela have forced the country’s discouraged and desperate population to find creative ways of putting food on the table. In this effort, Venezuelans have hit upon an unlikely source of sustenance: RuneScape, a nearly two-decade-old video game franchise, increasingly provides one of the most stable sources of income for tech-savvy segments of the Venezuelan population.

An Unlikely Source of Sustenance

What is RuneScape, exactly? The franchise, which debuted in 2001, is a massive multiplayer online role-playing game (MMORPG), meaning that players can interact with one another rather than playing solo. It is free to download, but some perks are only available to members who pay a monthly fee.

A quick and common way to earn vast amounts of RuneScape’s currency, gold, is to kill “Green Dragons.” Players can collect items dropped by the dragons and sell them on the in-game marketplace for “gold.” Then, this gold can be sold on third-party sites for money that works in the real world (often in the form of cryptocurrency like Bitcoin). While prices vary, one million gold in RuneScape is worth about one U.S. dollar, and an hour of killing Green Dragons typically generates at least 500,000 units worth of in-game currency.

However, this strategy—called “gold farming”—breaks the rules of the game, and the game’s developer, software firm Jagex, can shut down accounts for this sort of behavior. RuneScape players whose sole goal is to extract millions of gold each day inflate prices on the in-game marketplace, angering recreational players who don’t view the game as a source of income.

Venezuela’s current battle with hyperinflation offers a perfect explanation for why gold farming is banned—and why the game has become a magnet for Venezuelan players. Oil is Venezuela’s top commodity, accounting for over 95 percent of its exports and a quarter of GDP. Since the world price of oil plummeted in 2014, the government has been increasingly unable to pay its bills, and in order to finance the deficit, Venezuela resorted to printing more Bolívars. The end result was hyperinflation that exceeded 1.3 million percent in 2018.

Rising prices have not been met by increased supply, however. Venezuela has nearly exhausted the foreign currency reserves that it uses to pay for vital imports of food and medicine—with drastic consequences. Venezuelan citizens lost an average of twenty-four pounds in 2017.

In desperation, many Venezuelan gamers have turned to playing RuneScape. Using the game as a source of income has proven more reliable for many than employment in the country, where the regime of strongman Nicolás Maduro increased the monthly minimum wage on January 14 by 300 percent—to roughly $6.70. By way of comparison, RuneScape players selling 500,000 gold per hour on third-party sites would earn that sum in less than two eight-hour shifts.

However, Green Dragons are only located in areas of the game’s online map where players can kill one another’s characters. Frustrated at what they see as inaction by developers to stop rule-breaking, some players are taking matters into their own hands. In an extreme example in 2017, a guide was posted to Reddit detailing how to target and hunt down Venezuelan players.

Other, more sympathetic participants have expressed concern that killing the characters of Venezuelan players would have real life consequences. When a player dies in the game, they lose all the gold that they have not yet safely stored. Thus, killing a Venezuelan player might send them to bed hungry that night.

Yet, despite the uncertainty, RuneScape offers the best employment option for many people living in Venezuela, where almost 90 percent of the population is now estimated to be impoverished.

RuneScape By the Numbers

Another estimate comes from a promotion that gave members of Twitch Prime, a gaming communication platform, a free month of RuneScape membership. London’s Daily Express reported that an anonymous source involved with the game’s development said that three hundred thousand accounts originating in Venezuela took advantage of this promotion in the third quarter of 2018 (albeit often using stolen accounts or fraudulent payment information).

Although the exact figure is impossible to verify, merely looking at the number of active players understates the game’s impact because each player is likely supporting multiple dependents. On the high end, lloga guessed that each Venezuelan RuneScape player supports between two and ten friends and family members. In total, as many as 1.8 million Venezuelans may depend, either directly or indirectly, on Green Dragons for their daily allotment of calories.

Even if this is an overestimate, stories of Venezuelan players have gained enough traction on internet forums and in local media to conclude that a sizeable group lives off RuneScape. And today, political turmoil, overwhelming oil dependence, and escalating U.S. sanctions make it unlikely that the Venezuelan economy will stabilize any time soon. That means RuneScape will continue to offer a strange virtual safety valve for thousands of Venezuelans for the foreseeable future.

Doug Dubrowski, Sven Peterson and Hayden Gilmore are all researchers at the American Foreign Policy Council in Washington, DC.