Is Poland’s Alliance with America "Worthless"? 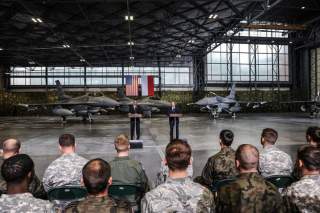 The outspoken Polish Foreign Minister, Radoslaw Sikorski, apparently believes his nation’s alliance with America is “worthless.” For once, Washington should not race over to reassure him that Americans will do whatever it takes to protect Poland from whatever it faces. Instead, Warsaw should demonstrate why it is worthy of Washington’s support.

The weekly publication Wprost apparently received a recording of Sikorski’s conversation with Poland’s former finance minister. Sikorski, mentioned as a candidate for European Union foreign minister, declared: “This Polish-American union is worthless. It is even harmful because it gives Poland a false sense of security. Complete bullsh*t. We get into conflicts with the Germans, with Russia, and we think everything’s great because the Americans like us. [We are] suckers. Total suckers.”

There are suckers in the existing relationship, but they are American rather than Polish.

The United States spends more than 4 percent of its GDP on the military and accounts for three-fourths of total defense outlays by NATO members. The alliance aims for 2 percent of GDP but its members collectively only hit 1.6 percent last year. Poland has been patting itself on the back for recently hiking defense expenditures—to 1.8 percent of GDP. This year, Warsaw expects to edge up to 1.95 percent. Overall, America’s contribution to direct NATO expenditures is nearly ten times that of Poland.

The collapse of the Soviet Union exacerbated the discrepancy. While Washington preserved its globe-spanning military, its European allies quickly cut their armed forces to reflect the fact that they lost their main (and in many cases, only) enemy overnight.

Worse, the alliance expanded willy-nilly to the Russian border, bringing in nations combining minimal military capabilities and serious potential disputes with Moscow. None had ever mattered to American security, but Washington handed out security guarantees like hotels place chocolates on pillows: everyone got one—including Poland.

U.S. and European officials simply assumed that they would never have to make good on their promises. Then came the crisis in Ukraine, which suggested NATO’s Article 5 guarantee might not be a dead letter. The easternmost members of the alliance started clamoring for reassurance. Most importantly, they wanted American troops on station and permanent garrisons to protect their frontiers.

No one was more insistent than the Poles. Back before he thought the alliance was worthless, Sikorski stated: “America, we hope, has ways of reassuring us that we haven’t even thought about. There are major bases in Britain, in Spain, in Portugal, in Greece, in Italy. Why not here?” He complained that existing facilities were “legacies of the Cold War” and their locations should “take into account the events of the last quarter of a century.”

Prime Minister Donald Tusk argued: “If there is a thing such as NATO’s border that needs diligence it would be Poland’s eastern border. The pace of increasing NATO forces could be higher.” Polish Defense Minister Tomasz Siemoniak announced: “The U.S. must increase its presence in [Central and Eastern] Europe, also in Poland.” He later added: “In the longer-term perspective, what we would like to see very much in Poland is the development of NATO and American infrastructure and an increasing military presence of both the U.S. and NATO in our country.”

Polish National Security Bureau Chief Stanislaw Koziej opined: “Nuclear deterrence is a very important factor that NATO has at its disposal, and it’s becoming increasingly important.” After Russia swallowed Crimea, former Polish president Aleksander Kwasniewski explained: “we will have a difficult time getting through the next four or five months without very clear and very determined American leadership.” That means “something concrete” rather than just “empty words,” said Bohdan Szklarski of the University of Warsaw.

The benefits to Poland of winning a defense commitment against Russia backed by a permanent garrison from the world’s superpower are obvious. But what’s in it for America? The relationship runs one-way. Warsaw does not offer commensurate aid to the United States.

As a substitute, Poland, like several other NATO members and member wannabes, participated in Washington’s foolish wars in Iraq and Afghanistan. Ironically, by encouraging the Bush administration’s misguided effort to transform the Middle East and Central Asia, Warsaw’s involvement actually was harmful. But even if the missions had been worthwhile, they didn’t compare with America promising to face down Poland’s potential, nuclear-armed antagonist. The United States could find itself facing catastrophic destruction if things went badly.

There is no security reason for the United States to risk war for Warsaw. Poland never was strategically important for Washington. The United States participated in the Versailles conference, which recreated an independent Polish state, but neither defended the latter from Nazi Germany, nor confronted the Soviet Union on behalf of Poland’s independence at the end of World War II. Washington did nothing during the 1956 Poznan uprising. In the 1976 presidential debate, Jerry Ford chose to claim that Poland didn’t view itself as occupied rather than to call for an American-led liberation campaign. Even the Reagan administration did not consider military intervention in early 1982 when the Polish government cracked down on the Solidarity union after being threatened with a Soviet invasion.

Americans always felt sympathy for the plight of the Poles—for centuries stuck among avaricious empires. Although unfortunate, even tragic, Poland’s situation is no cause for the United States to risk war. Washington’s policy changed only when Washington policy makers stopped thinking about NATO as a military alliance and began treating it as an international social club. Thus, Poland received a coveted Article 5 security guarantee.

The alliance is worthless only if the United States won’t back it. (Many, if not most, of the European members wouldn’t offer much practical aid, but NATO always stood for North America and The Others.) While it’s not certain what America would do in the event of attempted Russian coercion of Warsaw, most administrations would see that as a threat to core commitments that could not be ignored. Being Germany’s neighbor also might galvanize Berlin. At the very least, Moscow would recognize that threatening Poland carries significant risks of confrontation with America. That’s far from “worthless” for Poland.

Sikorski’s comments should be a wake-up call in America. Washington has accumulated a host of welfare dependents in Europe and elsewhere. Yet those whose teeth are most tightly clamped onto the U.S. teat appear to show the least respect for America. The real sucker in this arrangement is Washington. The United States should reconsider who it protects from whom, reserving “worthwhile” alliances for countries that offer something meaningful to America in return.