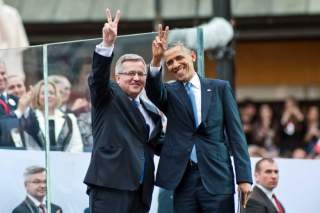 I feel a bit confused. A week ago The National Interest published an article which draws its conclusions from an illegal and distorted recording of a private conversation. Recent years have proven on both sides of the Atlantic that not all journalists respect the concept of a private chat. Those that have learned this lesson did so the hard way. Fortunately all the “open mic” incidents and leaked messages haven’t really had much of an impact on international relations. Assessing the situation based on illegally recorded private conversations would be misguided and simply wrong. The American public knows this probably better than most others.

Polish-American relations are not built upon incidental and out of context opinions but long historical ties filled with friendship and mutual trust. They are based on a set of values such as democracy and respect for human rights that both nations share and promote, individually and together, across the globe. Wherever we hear a call for democracy, freedom and human rights, Poles unite with their American friends and stay true to our famous vow "For Your Freedom and Ours" - from Iraq to Afghanistan, from Syria and Mali to Ukraine.

There is a long history to our rich and mutually beneficial friendship. The US played a large part in rebuilding Poland’s sovereignty after World War I. Washington’s support was instrumental in Solidarity's victory in 1989 and the reconstruction of democracy in Poland after a long and difficult period of Soviet influence. The Polish people still remember vividly George H. W. Bush’s visit in 1987 when, as Vice President, he defied communist censorship and delivered the first free speech on regime-controlled television. Recalling the great moments from our Polish-American history we should remember not only Kosciuszko and Pulaski who aided Washington in the American Revolution, but also Polish soldiers during World War II.  And today our troops continue to serve with their American brothers in arms for causes far from Poland’s national interest but responding to the challenges faced by the global community, such as humanitarian disasters or terrorist threats.

But let’s forget about the leaders and heroes for a while and talk about the people. About those millions of Polish workers, peasants and intellectuals who for over two centuries populated the United States, building this country and contributing to its prosperity as well as cultural and scientific development. What would the American movie industry or American engineering look like without those thousands of sons and daughters of Polish immigrants? Only a few days ago I was deeply saddened to learn of the passing of two extraordinary personalities: Eli Wallach, famous Hollywood actor and Stephanie Kwolek, chemist and inventor of kevlar, both of them born in America to Polish parents. And less seriously: would the Wizards get to the playoffs without our great Marcin Gortat?

Poland, though not the biggest nor the oldest partner, is definitely a close and committed ally and friend of the US. But should the U.S. - as Doug Bandow argues - stand besides only those that are strategically important? Can the rest of the world just be given up in a greater influence sharing game of the big guys? Such concepts remind me not only of Cold War thinking but even more of the colonial era scenario. Is that the world Doug Bandow aspires to live in? I hope not. I do hope that we have learned from the lessons of the past. The Western world has built alliances in order to fulfill them and we have set standards for countries to live up to. Taking into account our size, geopolitical location and historical background, Poland plays its role and carries its share of the burden. During President Obama’s trip to Warsaw Polish authorities pledged to spend 2% of GDP on defense expenditures, thus being one of very few Alliance members to reach this NATO benchmark. Moreover Poland is undergoing a multibillion dollar modernization of its armed forces as we understand that it is first and foremost our responsibility to ensure our own security while also helping others in need. History has taught us this.

One, expressed in private, uncertain and distorted opinion cannot prevail the whole picture of a mutually beneficial and fruitful relationship. Moreover, the quoted words were from many months ago during a very specific moment of uncertainty as to the stance of our allies towards the Ukrainian crisis. Many words were said, but few things done. The US reset policy and pivot to Asia has left many Europeans wondering about Washington’s commitment to Europe. The Central European assessment of the situation in Ukraine and Russia has been easily ignored and only a major crisis in Ukraine, a scenario that has been raised as a possibility by regional leaders including Poland’s Foreign Minister Radosław Sikorski, led to US reengagement.

Later on I was profoundly satisfied to see the US take a firm stance and give practical support to the new, democratic authorities in Ukraine. I was also glad to note the promising projects to strengthen security in our region. In this regard, President Obama's visit to Warsaw was a great success. His reassuring words that Poland and other Central European allies will never be alone again were met with great enthusiasm.  Does the word "again" pronounced by the US President mean anything? To us it invokes the abandonment we have experienced so many times throughout our history.

Naturally, Poles and Americans, have things to improve on. International relations are a lot like interpersonal relations. Like in an old robust marriage sometimes we want to watch a soccer game on TV rather than another soap opera, sometimes we would prefer to meet our old friends rather than attend our parents-in-law's dinner. But we do not separate because of such issues. Relations between two allied countries also require constant attention and space for improvements.

LNG export from the US to Europe generally, and to our region in particular, should be a matter of our common interest. This mutually beneficial endeavor eliminates energy supply as a political weapon in our region, while also creating more jobs in America and allowing the US to exert soft power to attain more stability in the global political arena.

Getting Poland into the Visa Waiver Program would be the next remnant from the past to resolve. Can you imagine Polish veterans from deployments in Afghanistan wishing to attend commemorative ceremonies in the US refused entry just because they are not married, have no substantial property and lack a six figure bank account? Can you imagine the Polish symphony orchestra playing a recital in Washington DC as a quartet just because the violins and trumpets were not granted visas? We should take care of this as soon as possible and then forget about this shameful issue.

Finally let me refer to a basic question raised by Doug Bandow: do US-Poland relations really need greater proof that they are more than good? I'm positive they do not. On an everyday basis we can feel our friendship and mutual trust, and we are ready to face together the new challenges of tomorrow.

Ryszard Schnepf serves as Ambassador of Poland to the United States.