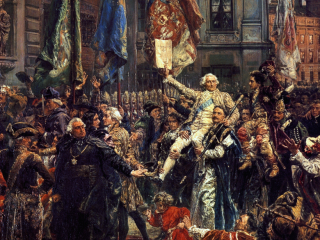 It may not be apparent to everyone today, but written constitutions are a relatively modern phenomenon. The two earliest examples date only from the late eighteenth century, and come from two countries, decidedly different at first glance: America and Poland.

The first one was a federation of newly independent colonies that would become the most powerful country in the modern world; the other one was then a major European power and the largest state on the continent, stretching from the shores of the Baltic in the north to the Black Sea in the south.

The constitutions of these two countries not only shared many notable similarities in their development and their final form, but they were also ratified almost at the same time: the first on September 17, 1787, the other on May 3, 1791.

Like its American contemporary, the origins of Poland’s constitution can be traced to several important and innovative developments in Polish history. Like their English counterparts, who drafted the Magna Carta—serving as the foundation of a historical process that led to the development of constitutional law—Poles also sought to restrict the powers of the crown and protect the rights of the individual.

Although regarded as one of the most powerful Christian powers in the European continent since adopting Christianity in 966, Poland effectively safeguarded the rights of religious minorities, embedding religious tolerance when King Bolesław the Pious put Polish Jews under royal protection by issuing the Statute of Kalisz in 1264, assuring their right to settle and live without fear of persecution. This unique precedent was codified later in the 1573 Warsaw Confederation, and became the first document in European history to legally mandate religious tolerance.

With such forward-looking ideas, Poland became the only place in Europe where refugees of various religious and political groups could settle and practice their beliefs without fear of official retribution. Sixteenth-century Poland was universally admired as the first state in Europe that exemplified religious tolerance, with mosques being built alongside churches and synagogues.

Moreover, other progressive laws defining the role of the monarch and extending rights to the citizens of Poland would follow, as the 1374 Privilege of Koszyce reduced taxes to a single remit that the landed gentry were expected to pay to the crown. Its other important provisions included the right of compensation from the crown for losses in war or captivity, and a restriction on appointing foreigners to official posts.

Further privileges granted by the crown between 1425 and 1447 established the legal principle of “Neminem captivabimus nisi iure victum,” which prevented the gentry from being arrested without a guilty conviction. This gave Polish citizens an unprecedented right to due process that would not exist in any other European jurisdiction for another three centuries.

In the Privileges of Nieszawa and Cerkwica in 1454, King Casimir IV agreed to laws that restricted the crown in setting new taxes, promulgating new laws and drafting nobles for military service without the consent of the local assemblies.

Poland’s strong parliamentary tradition originated in the fourteenth century. The history of Sejm is crucial in understanding the development of Poland’s constitutional path.

The act of Nihil novi, signed by King Alexander Jagiellon during the Sejm session in Radom on May 3, 1505, stipulated that “nothing new” could be legislated without the agreement of the nobles, officially transferring legislative power from the crown to the Sejm, which was composed of the landed gentry. This date is generally accepted as the beginning of Poland’s first republic, also known because of the Nihil novi act as “the Republic of Nobles.”

Another Polish innovation was a parliamentary procedure called liberum veto, which allowed any Sejm deputy—in most cases bribed by magnates or foreign powers—to nullify all the legislation enacted by that Sejm.

Due to that fact, many Polish philosophers, intellectuals and politicians sensed the danger of this dangerous political development to the future of the commonwealth. One of the most prominent voices in the debate was Wawrzyniec Grzymała Goślicki.

Born near the town of Płock, Goślicki studied at the Jagiellonian University in Krakow and received his doctorate in canonic law in Italy. Goślicki’s remarkable work, titled De optimo senatore (The Accomplished Senator), portrays the ideal statesman who is well versed in the humanities, economy, politics and law. Goślicki’s influential essay on the art of ruling placed the Senate as an agent of balance, mediating between the crown’s absolutist tendencies and the noble class’s attempts to acquire more power. It also debated the issue of citizens’ rights vis-à-vis the policies of a just and responsible government.

His magnum opus quickly became one of the most popular books on the subject of political and social issues and its influence reached far and wide across Europe for centuries, causing widespread panic—especially in England, where Queen Elizabeth ordered the destruction of all existing copies of the philosopher’s essay.

Despite this, English reformers found Goślicki’s ideas inspiring, and the manifesto of Cromwell’s 1648 revolution quoted directly from the English translation of his work in order to justify its political ideology.

Furthermore, with the arrival of the English Civil War, Goślicki’s views reached the American continent. But it would take some time for the American colonists to implement the Pole’s suggestion of abandoning the tyranny of the monarch in favour of the democratic state, which later led to the birth of the United States.

Going back to Poland, a realistic glimmer of hope for reversing the wrongs of liberum veto appeared during the 1764–95 reign of its last king, Stanisław II August Poniatowski, a Polish magnate who had been a deputy to several Sejms between 1750 and 1764.

The Convocation Sejm of 1764, which elected Poniatowski to the throne, was controlled by the Czartoryski family’s reformist Familia party and backed up by Russian military forces, at the Czartoryskis’ invitation.

With a growing interest in constitutional reform in the country, just before the First Partition, the Bar Confederation sent Polish noble Michał Wielhorski to France by to ask Gabriel Bonnot de Mably and Jean-Jacques Rousseau for their suggestions on a new constitution for a reformed Poland. Thus, the former philosopher submitted his recommendations, known as Du gouvernement et des lois en Pologne (The Government and Laws of Poland), in 1770–71; the latter finished his work, titled Considérations sur le gouvernement de Pologne (Considerations on the Government of Poland), in 1772. By then, the First Partition was already underway due to the defeat of the Bar Confederation—focusing on limiting the influence of foreigners in commonwealth affairs, and opposing religious tolerance—which set the scene for the partition treaty of August 5, 1772, which was signed in St. Petersburg by Russia, Prussia and Austria.

Despite the famous protest by deputy Tadeusz Rejtan, the treaty was ratified on April 19, 1773 during the Partition Sejm. However, it was not the end of Polish attempts to reform the country.

A new reforms supported by the king and the Czartoryski family were introduced at the Sejm, among the most significant was the 1773 establishment of the Commission of National Education, creating the first ministry of education in the world.

Extraordinary statesmen such as Hugo Kołłątaj and Stanisław Staszic proposed far-reaching political and social reforms, and laid the groundwork for the Polish Constitution, where the process was officially launched in 1787, when Ignacy Potocki was selected to coordinate the project.

An opportunity for further reform occurred during the “Great Sejm” (also called the “Four-Year Sejm”) of 1788–92, which began on October 6, 1788. On its second day, it became a confederated sejm to avoid the inconveniences of liberum veto. Adding the fact that Russia and Austria were at war with the Ottoman Empire, and the Russians found themselves simultaneously fighting in the Russo-Swedish War of 1788–1790, a new alliance between the Polish-Lithuanian Commonwealth and Prussia provided temporary security against Russian intervention, and King Stanisław August could get closer to leaders of the Patriotic Party.

Finally, the new constitution was drafted by the king, who wanted the commonwealth to become a constitutional monarchy similar to that of Great Britain, with a strong central government based on a strong monarch. As he concluded, the constitution of May 3, 1791—considered Europe’s first codified constitution, and the modern world’s second—was “founded principally on those of England and the United States of America, but avoiding the faults and errors of both, and adapted as much as possible to the local and particular circumstances of the country.”

The new constitution, whose full text can be found here, was a pragmatic mixture of progressive and conservative ideas. Among other things, it introduced political equality between townspeople and nobility, extended legal protection to a wider sector of Poland’s citizens by placing the peasants under the protection of the government, and abolished institution of liberum veto. Moreover, it covered about the same percentage of the population as the American constitution, which limited rights and privileges to male property owners.