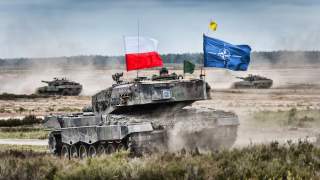 A call earlier this week between President-elect Donald Trump and British Prime Minister Theresa May — in which they agreed on the need for more NATO member states to commit two percent of their GDP on defense spending — brought European security debate back into the limelight.

Although Trump gained notoriety in Europe for his skepticism of America’s alliances, there has been a surge of high-ranking politicians and government officials on both sides of the Atlantic saying that Europe is not doing enough for its defense. Earlier British Foreign Secretary Boris Johnson said that Europe should “step up to the plate” to meet NATO defense spending targets, and NATO chief Jens Stoltenberg noted that “more defense spending in Europe is important for the transatlantic bond.” A resurgent Russia and an increasingly inward looking political mood in the United States have prompted this reassessment.

The good news is that new key players such as Poland have emerged ascendant in Europe’s security architecture.

Unlike most of its NATO and European peers, Poland has for the past two decades consistently viewed defense as a priority issue, and as a result, has been slowly but steadily emerging as the bedrock of European security. Neighboring the highly militarized Russian enclave of Kaliningrad, Poland has reason to worry, and has defied the notion that all Europeans are simply “free riding” off the American taxpayer.

Poland is one of the few countries on the old continent that never cut its defense spending by a large margin after the collapse of the Soviet Union, keeping it at an average of around 1.9 percent of its GDP for the past two decades. During the 2008 global financial crisis, Poland’s military spending dipped to 1.7 percent of GDP, but following Russia’s incursion into Ukraine in 2014, it rapidly rebounded to a respectable 2.2 percent of GDP in 2015.

These spending habits contrast greatly with neighboring large and small NATO member states like Germany and the Czech Republic. Over the course of the last twenty years, Germany — Europe’s foremost economic power — has spent an average of around 1.3 percent of its GDP on defense, while the Czech Republic spent around 1.4 percent.

To date, apart from Poland, only Estonia, Greece, the United Kingdom and the United States meet NATO’s agreed two percent criteria. These countries will soon be joined by Latvia and Lithuania, as they have pledged to spend at least two percent of their GDP for defense by 2018.

However, spending numbers alone do not tell the whole story of defense commitment. The Polish government has pursued a number of policies designed to increase its military prowess and deter potential foes. In 2012, Poland unveiled a wide-ranging military modernization program, which, by 2022 will have poured nearly $62 billion on advanced military equipment. The funds will not only be used for purchasing state-of-the art tanks, military aircraft, missile systems and naval forces, but also upgrading its vast, albeit slightly aged military equipment that Warsaw retained after the end of the Cold War.

In early 2016, Warsaw also announced that it plans to nearly double its army size to strengthen the nation’s borders. This initiative will boost the size of Poland’s professional army from around 80 thousand to 150 thousand in the upcoming years. Polish Minister of Defense Antoni Macierewicz added that such military force “is the minimum which is necessary to respond to military threats.” Once this reform is completed, Poland will be inching closer to Europe’s largest armies like France, Germany and United Kingdom, where military forces number 200 thousand, 180 thousand and 162 thousand respectively.

In addition to the professional army, Poland announced in November that it plans to build a new territorial defense force of 53 thousand volunteers by 2019. According to the Ministry of Defense, each of Poland’s sixteen provinces will have a force of three thousand to five thousand volunteers who will undergo military training, with particular priority of deployment given to eastern provinces that are deemed the most exposed to Russia.

Through its history of participating in international operations, Poland has offered evidence that it is not merely a “free rider,” but a trustworthy partner to its allies. It has demonstrated loyal support to the United States both in Afghanistan and Iraq, where its troops fought the Taliban and helped topple Saddam Hussein. More recently, in 2016, Poland led the establishment of the trilateral Lithuanian–Polish–Ukrainian brigade, contributing the bulk of the fighting force, which will strengthen Europe’s eastern frontier.

Poland stands as an exception to Europe’s generally lackluster defense effort. Warsaw is proving with its long-standing commitment to defense spending that not all European countries are “free riding” on America’s institutionalized security umbrella in the guise of NATO.

When Washington considers its policy in regards to America’s allies in Europe and NATO, it should take notice of Poland’s colossal efforts and encourage other European nations to follow suit rather than weaken the NATO alliance. In a complex and volatile international environment, the United States will need its loyal allies and strong alliances.

Agnia Grigas is a nonresident senior fellow at the Atlantic Council. She is the author of The New Geopolitics of Natural Gas and Beyond Crimea: The New Russian Empire. You can follow her on Twitter @AgniaGrigas.