Poland Wants More Than NATO Can Give 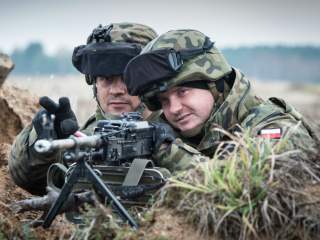 The NATO alliance is treating Poland and other allies in the region like a buffer zone, refusing to permanently station troops there and hence provide the same level of security that has long been accorded other allies to the west, according to a Polish official. Such undiplomatic comments weren’t those of a low-level functionary in the Polish Defense Ministry, or even the anonymous remarks of a “senior official.” Rather, they were the very public words of Andrzej Duda, the recently elected president of Poland. Unfortunately, major obstacles—political and economic—stand in the way of NATO establishing permanent troop concentrations in Poland or elsewhere in Eastern Europe. Nevertheless, Duda’s comments and his relentless, vocal pursuit of permanent NATO forces on Polish soil mean that, by diplomatic standards, the upcoming NATO summit in July is likely to be downright riveting.

This summer, the presidents and prime ministers of the alliance will gather in Warsaw—on Duda’s turf—to engage in yet another NATO summit. As they did at the last summit, in September 2014 in Wales, alliance leaders will wrestle with the fact that Russia’s illegal annexation of Crimea and its invasion of eastern Ukraine have fundamentally upended the security situation in Europe.

NATO discovered in early 2014 that its force posture in Europe was not up to the task of responding to this new security situation, of assuring the most vulnerable allies or, arguably, of deterring Russian aggression. There are four reasons for this: a relentless American drawdown of U.S. military forces on the continent, Europeans cashing in on the post–Cold War peace dividend through downsizing in the 1990s, flat defense budgets across most of Europe since the mid-2000s and the widespread move from larger conscript-based armies to professional volunteer forces. Together, these factors have resulted in a diminished alliance ability to conduct warfare against a large, near-peer adversary—like Russia.

Ultimately, the latent economic, political, and military power within NATO is likely to outlast Russia in any major conflict. However, it is in the short-to-medium term that the alliance needs to be concerned about its ability to deter Russia as well as assure its own member states.

In response to the challenge from Moscow, the alliance has adjusted its presence in Europe over the last two years. First, NATO greatly enlarged the Baltic Air Policing force, from four fighter jets to sixteen—although as of September 2015, that number has been halved to eight. The alliance also expanded the NATO Response Force (NRF) and crafted within it a Very High Readiness Joint Task Force (VJTF) capable of deploying within days. Finally, the alliance has created small multinational coordination cells, the so-called NATO Force Integration Units, in the capitals of several eastern members.

To bolster these collective actions, several allies have deployed military forces temporarily to northeastern Europe on a bilateral basis. For instance, the United States took quick advantage of its remaining forward-based forces in Europe to deploy a total of six hundred soldiers from Italy to the Baltic States and Poland in April 2014. Since October of that year, the American military presence in northeastern Europe has been sustained with the help of rotationally deployed forces from the continental United States, and it seems likely the presence will continue through at least the end of 2016. The United States also deployed additional F-16s and transport aircraft to its U.S.-Poland aviation detachment, based at Lask, Poland. Finally, the United States has also moved to increase its stocks of military equipment pre-positioned in Europe and expand the scope of its European Reassurance Initiative through additional funding and increased rotational deployments.

Like the United States, other allies have rotated forces to the Baltic States and/or Poland on a bilateral basis, including Denmark, Germany, Hungary, Portugal and the United Kingdom. These deployments typically have lasted for a period of months and have been tied to exercises and training events. For instance, Portugal deployed 140 reconnaissance troops to Lithuania to participate in exercises from March to July of 2015, and France deployed a unit consisting of three hundred troops and fifteen main battle tanks for exercises in Poland from April to June of 2015. In limited cases, some allies have announced plans to make such bilateral deployments regular occurrences. For example, both Germany and the United Kingdom have announced plans to join the United States in implementing regular, small-scale rotational deployments to one or more Baltic States and Poland.

Despite the changes in alliance force posture and the bilateral steps taken by several allies, it remains unclear whether all of this is sufficient to safeguard alliance security. Evidence that the NATO force posture is sufficient to deter Russia is difficult to uncover. In June 2015, Russian President Vladimir Putin reportedly claimed that “only an insane person and only in a dream can [one] imagine that Russia would suddenly attack NATO,” but ultimately there is no way for certain to know if deterrence is succeeding.

In terms of assuring its member states, the evidence is clearer—and it’s not good for NATO. Some allied governments seemed quite unsatisfied with initial alliance actions, arguing for a far more robust NATO response that would include permanent deployment of troops. In particular, Polish leaders expressed “exasperation” with the alliance’s unwillingness to strengthen defenses in the east, following Russia’s annexation of Crimea. Leaders of Poland and Estonia have even expressed frustration with what they perceive as the relatively small-scale bilateral moves by the United States and other allies.

More objective assessments, such as those available through war games and other analyses, seem to bear out the perceptions of allied governments in Eastern Europe. In short, given today’s allied force posture, NATO will find it difficult to defend or retake Baltic State territory in the face of any large-scale, determined Russian invasion. Given this, the alliance faces a particularly challenging task: it must employ its force posture to signal that a quick, decisive Russian military operation in northeastern Europe is not possible or likely to succeed, and that instead, any aggression will be met with long-term resistance.

Changing NATO’s force posture so that it can accomplish these objectives is a tall order right now, for a combination of political and strategic reasons. Politically, there remains strong disagreement within the halls of NATO over the nature of the alliance’s relationship with Russia. In 1997, Russia and NATO signed a Founding Act, a political agreement (not a legally binding treaty) designed to formalize relations between the two and provide Russia a role in some alliance deliberations without giving it a veto. Germany in particular continues to view the Founding Act as a foundational document for the post–Cold War era, and remains committed to the letter of the agreement. Among other passages, the Founding Act notes that “… the Alliance will carry out its collective defense and other missions [through] reinforcement rather than by additional permanent stationing of substantial combat forces.” Given its perceptions of the Founding Act, Berlin is unlikely to simply dispense with the agreement’s limitations on force posture in the east.

In addition to political issues, there remain important differences of opinion within the alliance over strategic aspects of permanent presence. Although Poland and Estonia have been unambiguous in their desire for a permanent alliance presence in the east, other allies believe this would represent an unhelpful escalation of the West’s standoff with Russia over Ukraine. Even among the Baltic States, there are differences of opinion in how to manage Russia strategically. Latvia, where roughly 27 percent of the population is of Russian descent, has been far less vocal on issues such as permanent presence of U.S. or NATO forces on Latvian territory, out of concern over provoking Russia too much. Still other allies, such as Italy, Spain and Greece, are far more concerned with security matters to Europe’s south and southeast, such as illegal migration from Africa and Asia.

Increased bilateral deployments, outside the context of NATO, may provide some additional degree of assurance, but the rotational deployments that form the backbone of most bilateral efforts have significant strategic and operational limitations. A rotationally deployed force from the United States is unlikely to deter effectively because it may be unable to prevent opportunistic aggression on the part of a nuclear-armed adversary—again, like Russia—seeking a quick, decisive military operation. Moreover, a rotational deployment from the United States during a period of insecurity, no matter how small or insignificant, is likely to be interpreted or characterized as escalatory. Finally, rotationally deployed forces from the continental United States are unlikely to arrive in Europe as well-informed about local or regional culture, habits, standard operating procedures and rules and regulations, ultimately inhibiting their effectiveness.

Bilateral permanent deployments are a possibility as well, but the United States and the United Kingdom—the two allies most experienced in permanent forward presence—are unlikely to change tack and decide to permanently base military forces in Eastern Europe. Washington and London clearly recognize the importance of maintaining a unified alliance approach to managing the threat posed by Russia, and pushing permanent basing of U.S. or UK troops even if only through bilateral arrangements is likely to splinter the alliance at a time when solidarity is critical.