Poland's Democracy Is Not Failing 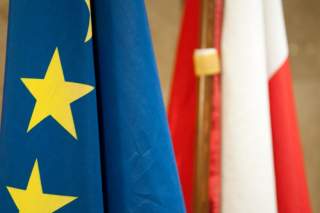 The legal dispute centers on the current Law and Justice (PiS) government's withdrawal of the nominations of five judges appointed by the outgoing Civic Platform (PO) government during its final days in office. The Polish impasse resembles the one going on in Washington, where Republican senators refuse to hold confirmation hearings for President Obama's nomination of Merrick Garland to the Supreme Court.

Poland's nationalist PiS party and its leader Jarosław Kaczyński have long been highly controversial among Polish intellectuals. But calls for the suspension of Poland's EU voting rights and claims of the death of Polish democracy are far out of line.

Many Poles are worried about the future of their country and have organized into a (somewhat overblown) Committee for the Defence of Democracy. But many Poles are satisfied with the current government. The PiS has an absolute majority in the Sejm, Poland's parliament, and after a year in office is still by far the most popular political party in the country.

In short, Poland's democracy is not failing and is not lawless. It is a democracy coming of age, learning to play the kind of bare-knuckled, hard-ball politics that have always prevailed in the Anglosphere. It may not look pretty, but that doesn't make it undemocratic. Quite the contrary.

Little known outside the region, Poland is a magnet for Ukrainian students and immigrants. While Germany and its Chancellor Angela Merkel have made a lot of noise about its (one-time) open-door policy for Syrian refugees, Poland has quietly assimilated hundreds of thousands of refugees from the turmoil in Ukraine.

The Ukrainian refugee crisis may be the biggest refugee crisis that no one has heard of, because it hasn't been a crisis. No drowned children, no capsized boats, just a half million people delivered from violence and societal breakdown, proportionally just as large a number as the 1 million received by Germany.

In stark contrast to the closed borders and squalid camps that litter the refugee routes across the Balkans, the integration of Ukrainian refugees into Polish society has been relatively smooth.

Most of these refugees never enter the official United Nations or European Union asylum systems at all. Instead they enter Poland as tourists, students, or temporary workers and apply for work permits on an annual renewal basis. They may lack the legal guarantees of documented asylum seekers, but, in practical terms, they live much better lives than most Syrians do in the temporary shelters of Germany and western Europe.

For example, the Polish Family Business Association is teaching Ukrainian small businesses how to set up purchasing cooperatives so that they can scale up to reduce costs. Polish journalists are working to professionalize the practice of news reporting in Ukraine. Such everyday practices are the building blocks of civil society — and ultimately of democracy.

One of the most important ways that Poland spreads Western civil society norms in Ukraine, Belarus, and other post-Soviet states is through education. Some 24,000 Ukrainian students study at Polish universities, most of them for free through a provision for the domestic treatment of students from formerly Polish areas of Ukraine and Belarus. The Polish government has also set up special scholarships from Ukraine's war-torn eastern provinces.

Poland's Belsat TV also beams uncensored content into Belarus, providing perhaps the only source of real news in the Belarusian language. Belsat TV hosted the only open political debates between candidates in the September 11 Belarusian elections.

For Belarus and Ukraine, Poland is a model of what a vibrant democracy looks like, a democracy in which two sides can vehemently disagree with each other without descending into civil war or turning to the European Union to resolve disputes.

Europe versus the people

Poland's democracy may not be perfect. But it is better than most, and good enough for export. Poles who are dissatisfied with their government should be debating and campaigning and (yes) protesting. But the rest of us should stay out of the way.

Western Europe's political class — along with many in North America and Australia — have almost universally condemned contemporary Poland as a dictatorship in formation. That is ridiculous. Poland's PiS may not be the kind of government that western intellectuals want to be governed by, but that doesn't make it undemocratic.

Nationalist governments in Poland, Hungary and elsewhere may be out of step with dominant intellectual currents, but democracy does not entail an obligation to support internationalism. Internationalist intellectuals have the right to an opinion too, and to oppose governments of which they disapprove. But there is a difference between opposition and condemnation.

When the day comes that the European Union suspends a democratically elected government that has not invaded, jailed, or even silenced its critics, the European Union will have outlived its usefulness and its values. Poland's government and legal institutions may or may not be making the right decisions. But that is for Poles to decide.

Image: Flags of Poland and the EU. Wikimedia Commons/Michal Osmenda