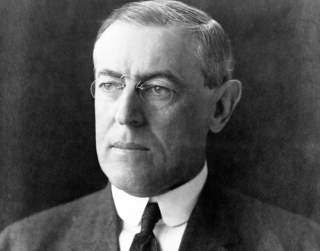 George Orwell once remarked that Stalin’s Soviet Union was a place yesterday’s weather could be changed by decree. America, it seems, is not wholly immune to this totalitarian impulse either. It increasingly manifests itself in political correctness, a phenomenon that is flourishing at elite American universities. Make no mistake: the authoritarian implications of this movement, as Jonathan Chait points out in New York magazine, should not be pooh-poohed. Quite the contrary. The tribunes of political correctness, Chait notes, “ are carrying out the ideals of a movement that regards the delegitimization of dissent as a first-order goal.”

The New York Times is thus featuring a story on a plot against Woodrow Wilson—or, to put it more precisely, the Woodrow Wilson School of Public and International Affairs. A student group called the Black Justice League is demanding that Princeton University, which Wilson molded in his image first as professor, then as the school’s president, acknowledge “the racist legacy of Woodrow Wilson” and move to strip his name from both the public policy school and the residential college. For good measure, these student radicals want Princeton to institute courses on “the history of marginalized peoples” as well as “cultural competency training.”

Wilson, a great Progressive hero, the would-be spreader of democracy and freedom around the globe, was indeed a racist—a nasty disposition that he happened to share with a number of his contemporaries. In Wilson’s case, he imbibed much of his worldview from his father, the Reverend Joseph Ruggles Wilson, a Southern Democrat who staunchly defended slavery on biblical grounds. One of his sermons, the great historian Arthur S. Link wrote, “was so fervid in defense of that institution that his congregation ordered it printed.” For the father, the son, W. Barksdale Maynard notes in his superb biography of Woodrow Wilson, was supposed to be a Southern hero who would redeem America: a “rhetoric of national salvation would run through much of Wilson’s life, along with a note of triumphant conquest and even a little revenge.”

At the same time, Link is careful to note that Woodrow Wilson’s attitudes were in advance of some of his southern coevals: “As early as 1881, we find Wilson writing hopefully about the development of a class of sturdy, independent Negro landowners in the South, advocating compulsory education for Negroes who did not want to go to school, and applauding independent Negro political action.” As president, Wilson, who viewed blacks as “an ignorant and inferior race,” reinstituted the segregation of the federal workforce, a shameful mark on his record that has frequently been written about.

So Wilson had, as is the case with not a few famous historical leaders, conspicuous shortcomings—a reluctance to compromise, grand visions without the means to implement them, a curt temper, and not least, a belief in the innate racial superiority of whites. But what does it really mean to try and tar him for not having adhered to enlightened twenty-first-century standards? Where will the impulse to purge the past of its sins end? Should Washington, DC, named after a slave owner, adopt a new title? Should the Jefferson Memorial be torn down? Or what about the Woodrow Wilson International Center for Scholars or the Wilson research fellowship that Johns Hopkins University, where Wilson taught for years, bestows upon promising undergraduates?

As L. Gordon Crovitz observes in the Wall Street Journal, there are a bevy of malefactors from the past that young students can try to hunt down: “Elihu Yale made his fortune as a British East India Company imperialist. Exploited Chinese laborers build Leland Stanford’s transcontinental railway. James Duke peddled tobacco.” And so on. It’s a game of trivial pursuit with real consequences for the intellectual climate on campus. No longer do students attempt to divine why the leading lights of a different era thought as they did, to attempt to put them in a broader context. Looking at Wilson as a racist pure and simple is rather reductionist. It tells you something about him but hardly everything.

Nor is this all. The push for political correctness has a chilling implication for current debate, which is something that the contemporary myrmidons of virtue are uninterested about. The idea seems to be that their young minds should be kept unsullied from the wider world. They want to be protected from subversive sentiments, coddled and cossetted, rather than exposed to contrary ideas. Hence the “safe spaces” and concern about “microaggressions.”

No, it isn’t. Will Princeton’s president Christopher Eisgruber act in that spirit as well as he confronts the demands of student activists? Or will he simply capitulate, preparing the ground for a fresh demand to expunge his institution’s past? Watch this man.