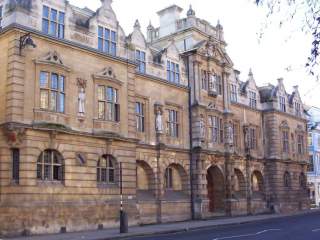 Cecil Rhodes was a very bad man who has become the liberal hate object du jour. An unabashed liberal imperialist, he established the De Beers diamond firm. He controlled big tracts of land in South Africa. His credo was, “Why should we not form a secret society with but one object, but the furtherance of the British Empire and the bringing of the whole world under British rule, for the recovery of the United States, for making the Anglo-Saxon race but one Empire?”

Which means that in our current overheated, politically correct climate, British students are demanding the removal of his statue, which was completed in 1911 and stands at the front of Oriel college. Rhodes used to be attacked by quacks on the right who saw him as a secret agent on behalf of world government and as an enemy of American nationhood.

Now a new and more potent group of aggrieved foes of Rhodes has emerged. An organization called “Rhodes Must Fall” has been founded on campus at Oxford. So fall he likely shall. The students apparently say that having to walk by the status amounts to “violence.” Some 2,300, the Guardian reports, have signed a petition calling for the college to sever ties with the old boy, who dedicated a slice of his estate to Oriel.

Consistent with the courage of most university administrations, the college is hastily capitulating. It issued a statement that declared,

“[T]he College does not share Cecil Rhodes’s values or condone his racist views or actions. We commit to ensuring that acknowledgement of the historical fact of Rhodes’s bequest to the College does not suggest celebration of his unacceptable views and actions, and we commit to placing any recognition of his bequest in a clear historical context. . . . We are starting the process of consultation with Oxford City Council this week in advance of submitting a formal application for consent to remove the Rhodes plaque. . .”

Now it’s going to deliberate over the statue. But ousting Rhodes is hardly the best way to approach the matter of his historical record. Purging the past will not cleanse Oriel; instead, it merely creates an artificially sanitized history that allows students to preen themselves on their ability to push around their elders.

As Daniel Hannan lucidly points out in the Telegraph, the trouble with what he calls an “Oxonian mob” embarking upon this path is that it assumes a unique virtue upon the part of those denouncing historical figures for their multifarious sins:

“In every age, some people like to posture by comparing their ethical standards favourably to that of a past generation. It’s the most facile kind of virtue signaling, because it allows you to look down on dead heroes.”

The detractors of Rhodes, however, smell victory. The Oriel college set declared,

“We find little sense in the immediate removal of the plaque of Rhodes while the fate of the colonialist’s statue remains uncertain, and apparently subject to further drawn-out bureaucratic processes. We reiterate that universities are no places for genocidal colonialists, or any other such toxic figures. We will continue with our call that all violent symbolism be immediately expunged from educational spaces.”

Who is next? Evelyn Waugh, a racist and brilliant writer, the author of such novels as Black Mischief? The blustering Kingsley Amis? Or Jane Austen, perhaps the greatest master of English prose, for alluding to colonialism and the British slave trade in Mansfield Park? Once you start going down this path the opportunities to expurgate what one age found acceptable are illimitable. It’s probably to be expected that such an impulse permeates leading American universities, which have been hotbeds of such nonsense for decades. But that it’s now invading the United Kingdom as well is surely cause for dismay.