Political Games Have Damaged NATO's Security on the Black Sea 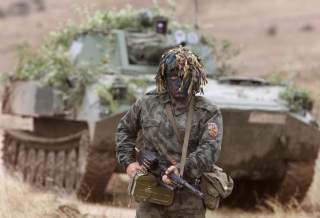 We are repeatedly reminded of the looming political threat posed by Russia on the North Atlantic Treaty Organization’s northern border. However, NATO’s South-eastern border remains the most vulnerable frontier of the North Atlantic alliance. The Black Sea is an area of strategic importance connecting Europe, Asia and the Middle East. Following Moscow’s invasion of Ukraine in 2014, Russia has dramatically increased its military presence in the Black Sea and used this presence to sustain its military operations in Syria. In a symbolic projection of Russia’s power in the region, President Putin also inaugurated a bridge over the Kerch Strait, linking the Crimean Peninsula to Russia.

Moreover, recent political uncertainty in Turkey has created urgent challenges for NATO’s southeastern border. At the moment, NATO’s maritime defense capacities in and around the Black Sea remain highly vulnerable. Recent vulnerabilities include political polarization and stalemate in some of NATO’s European member countries. The alliance is also plagued the resurgence of economic and political conflict within NATO between the United States and European countries. These developments have stalled the investment in maritime Black Sea defense capacities and have significantly heightened security risks. To strengthen the southeastern front, NATO countries need to reaffirm the importance of a coordinated defense policy that integrates military defense in the Black Sea area and the Mediterranean Sea. Unfortunately, this policy emphasis on commonalities in defense capabilities has been pushed to the side in recent years, given America’s emphasis on burden sharing.

Romania is a crucial partner of the United States and central to the stability of the alliance in that region. Romania joined NATO in 2004 and signed an additional bilateral military agreement with the United States, known as the Access Agreement. Beginning with 2016, Romania has hosted an antiballistic military shield. In recent years, Romania committed to increase its resources devoted to defense. The military budget increased by forty percent in 2016 and reached two percent of GDP in 2017. Despite a small reduction in resources devoted to the military in 2018, Romania—together with Poland and the Baltic States—is one of the NATO countries that have been most responsive to the push for burden-sharing advanced by the Trump presidency. Additionally, public support for NATO is remarkably high in Romania and consistently higher than support in neighboring countries.

A crucial policy priority of NATO is the modernization of its naval defense capabilities in the region. This is a vital and rapid priority, given that after Russia’s military annexation of Crimea, Moscow has tripled its military presence in the Black Sea. The total number of Russian soldiers deployed in the Black Sea region rose from 10,000 in 2014 to 31,000 in 2019. The number of Russian warships in the region has also increased by a factor of three. Sebastopol, Russia’s main military port, is only one hundred fifty miles away from Constanta—Romania’s own main Black Sea port. Meanwhile, recent political and military uncertainty in Turkey has shifted additional defense responsibilities to other NATO countries bordering the Black Sea.

While Romanian politicians since 1989 have been remarkably successful in negotiating the accession of their country into NATO, their country’s current polarized political stalemate has significantly slowed down the process of investment in the security goals of the alliance. Vergil Chițac, a retired Romanian admiral and a current Senator, views the indecision of the Romanian government on investment in military capabilities as unacceptable and considers such delays pose a major security risk for NATO.

For instance, in 2016 the Democratic-liberal government led by Prime Minister Dacian Cioloș launched the process of modernizing Romania’s naval defense. At the time, the government entered into a process of negotiations with leading manufacturers of naval equipment. The Dutch firm Damen Shipyard Gorinchem Nederlanden, a partner of top American suppliers of military technology such as Raytheon, Boeing, and General Dynamics, emerged as the frontrunner of this process. In 2016, the Romanian government committed to purchase four corvettes and to modernize the military equipment on battleships. But in 2017, the Romanian government rescinded the offer made by Cioloș government and decided to award contracts for naval modernization through a competitive process of bidding. However, this new procurement process also required Romania’s industrial participation in the construction of the corvettes. Yet, the Center-Left alliance led by Prime Minister Viorica Dăncilă that took office in January 2018 has challenged and, ultimately, rescinded this decision. With all of this back-and-forth, procurement plans came to an abrupt standstill in January 2019.

Furthermore, recent political developments within NATO have created additional obstacles for Romania’s process of naval modernization. In June 2018, French President Emmanuel Macron announced an initiative to create a common European army. Macron tied these grandiose plans for a common European defense within NATO to efforts to push defense contracts with French manufacturers over American firms, causing more conflict. The Belgian government defied President Macron’s push to purchase French military planes and went ahead with its decision to purchase F-35s, a decision which was openly rebuked by France. Similarly to Belgium, Romanian policymakers find themselves cross-pressured between America and France. As General Corneliu Dobritoiu, a former minister of defense, commented, “The battle for the influence of the United States in the Strategic area of the Black Sea will be won or lost in the next few weeks in Romania or it will be lost at the hands of the French.”

The current rivalry between European countries and the United States is an important source of military insecurity. The rivalry may lead to the proliferation of military technologies which are mutually incompatible, which could slow down the possibility of an integrated response to a military attack. Stuck between French and American pressures, policy-makers in Bucharest may neglect important questions concerning commonality and interoperability across different military platforms and technologies. In particular, there is little policy discussion about the compatibility between the technological investments that will be made in the Black Sea area and the naval equipment that is currently active in the Mediterranean Sea, even though these areas are vital and linked together.

In this current context, the increased political and military leadership of the United States within NATO is needed to strengthen the southeastern front of the alliance. The current rivalry between European countries and the United States may have severe long-term implications for the security of the region. Within NATO, America needs to complement its emphasis on burden-sharing with an emphasis on the coordination of military standards across different military platforms. Given the volatile situation along NATO’s southeast border, Washington needs to amplify negotiations with countries in the region and persuade these governments to accelerate the process of investment in naval defense.

Furthermore, given that the current process of military procurement is vulnerable to hold-ups in the courts, Romania should consider alternative methods of decision-making. One such possibility is the process of government-to-government negotiation that has been successfully used by the Romanian government in the acquisition of the Patriot missile air defense systems. Timing is of the essence in the currently volatile environment at the Black Sea. Among the different competitors for naval contracts, only Damen Shipyard can meet the requirement of the Romanian government for local industrial participation and can swiftly complete the construction of warships. Finally, the Romanian government needs to prioritize considerations about military interoperability. Only technologies that can be integrated with other technological platforms in the alliance, such as the U.S. Navy’s 6th Fleet, will reduce long-term military risks for NATO.

Isabela Mares is a professor of political science at Yale University.