The Political Hijacking of Religious Principles 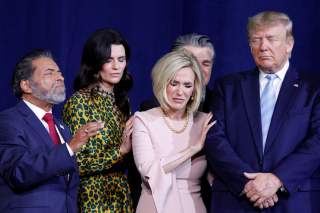 In his phone call to Iranian counterpart, Chinese foreign minister Wang Yi condemned the “military adventurist act by the U.S.” that “goes against basic norms governing international relations and will aggravate tensions and turbulence in the region.” Tehran then stated that Beijing could “play an important role in preventing escalation of regional tensions” and would supplant the increasingly unreliable and erratic United States.

When the Iraqi parliament voted to expel all American forces, a bellicose Trump threatened the Iraqi leaders with sanctions, forcing them to align with Russia and China. Iraq and China have already strengthened their economic relationships as they negotiated massive trade and construction deals. For many—including the former CIA director Michael Hayden—Trump is either a “Russian asset” or a “useful idiot” as the consequences of the president’s decisions in Iraq have now become welcome news for Tehran to make Washington less relevant in the region. In a recent tit-for-tat tweet, Trump ridiculed Iranian supreme leader Ayatollah Ali Khamenei and urged him to “Make Iran Great Again.”

The synergy between the Chinese inroads into Iran and the greater Arab world, as well as the Russian proxy wars in Syria and elsewhere, is central to the national security concerns of the Trump administration in the midst of America’s longest and most intractable regional wars in its history. Recognizing the return of great power competition with Russia and China, Dr. Kiron Skinner, director of the policy planning at the Department of State, outlined the containment strategy, saying that China poses a unique challenge because the regime in Beijing is not a child of Western philosophy and history. Demonstrating her lack of historical and philosophical understanding of Chinese influence on the European Enlightenment and the Founding Fathers of the United States, she said, “the Soviet Union and that competition, in a way it was a fight within the Western family,” but “it’s the first time that we will have a great power competitor that is not Caucasian.” Again, Skinner forgot the American war with non-Caucasian Japan during World War II. (Director Skinner has since been fired).

Even in her failed attempt to develop a Trump Doctrine with racial purity against China and the Muslim world, the State Department has come to be viewed internationally as an instrument of Trump’s powerbase that is shrouded in evangelical nationalism and in other conservative institutions. Their collective agenda is to make America a Christian nation with white supremacy.

Finally, having assembled a cohesive white national security team of obsequious Christian men—the vice president, the secretary of defense, the National Security Advisor, the Attorney General, the Secretary of the Treasury, and the Secretary of State—Trump’s acts would constitute the most consequential of his presidency to remake America. Emphasizing the national security risks, the Washington Post analysis highlights that Secretary of State Pompeo, for example, has tried “a maximalist position on Iran” and as the CIA director, Pompeo “quickly set up an Iran Mission Center” at the agency. The Washington Post then provides the reason that these acts made him “popular among two critical pro-Israel constituencies in Republican politics: conservative Jewish donors and Christian evangelicals.” This is essentially an attempt to export the American “culture war” to other countries with their Christian zealotry.

The very essence of the founding doctrine of the United States is to prevent the current perils of advocating religious, personal, and partisan agendas that would undermine the functioning of government in American democracy—not as the governance of absolute monarchy in a Christendom. The sobering lessons of yet another hubris of power come from a similar but experienced Republican administration of neoconservatives.

After the 9/11 terrorist attacks, President George W. Bush and his national security team gathered at the interfaith chapel of Camp David in the mountains of Maryland. At the worship service on that Sunday, Navy Chaplain Bob Williams gave a “touching and comforting” sermon, described Bush in his memoir, Decision Points, in 2010. The pastor asked the questions that so many of us struggle with, wrote the president: “Why? . . . How could this happen, God?”

The Navy chaplain told them that the answer was beyond their power to know but “life is sometimes a maze of contradictions and incongruities.” Bush carefully listened to his quoted passage from St. Ignatius of Loyola: “Pray as if it all depends upon God, for it does. But work as if it all depends upon us, for it does.” Consoled by the sermon knowing that God’s plan would prevail, said the president, as he boarded Marine One for the flight back to the White House. He further wrote, “by that afternoon I had reached one of the defining decision points in my presidency: We would fight the war on terror on the offense, and the first battlefront would be Afghanistan.”

In a new age of global war on terror—as Dr. Richard Haass of the Council on Foreign Relations later coined in two famous phrases—targeting the safe havens of terrorists in Afghanistan was a “war of necessity;” Iraq was a “war of choice” that is now being extended to Syria, Yemen, and elsewhere. The latter narrative of American choice was not necessarily a “calling” from God; it is a war against the moral universe.

In such instances, knowing the unseen forces of unjust wars and unfair congressional decisions is beyond normal human capacity but inevitably the higher power does always bend toward justice. It is the immutable reality of Nature’s God or Providence as the unknown mechanics of this impartial magistrate will bring about fairness for all. This was the precise point recognized by Otto von Bismarck when he cautioned Wilhelm I in 1875 that “I would . . . never advise Your Majesty to declare war forthwith, simply because it appeared that our opponent would begin hostilities in the near future. One can never anticipate the ways of Divine Providence securely enough for that.”

Benjamin Franklin, a Founding Father and deist, also described: “I have lived, sir, a long time; and the longer I live, the more convincing proofs I see of this truth—that God governs in the affairs of men. And if a sparrow cannot fall to the ground without his notice, is it probable that an Empire can rise without his aid?” The omniscience of God here is also the omnipotent arbitrator of justice in American public life as the unfolding saga of Trump and America’s role in the world has yet to be revealed in the moral universe.

As in the Chinese doctrine of Mandate of Heaven, God is all about justice that comes with an intrinsic karmic mechanism of rewards and punishments for the individual ruler and collectively for a particular group or geography. It is with that understanding, the Founding Fathers wrote the Declaration of Independence and the need of government to be “the great moral purposes of society. . . founded in the laws of nature and of Nature’s God,” said Secretary of State John Quincy Adams in 1821.

Henceforth, the American statesman John Quincy Adams—a Minister, Secretary of State, President, and Congressman—counseled that the United States “goes not abroad in search of monsters to destroy. She is the well-wisher to the freedom and independence of all. She is the champion and vindicator only of her own. She will recommend the general cause, by the countenance of her voice, and the benignant sympathy of her example.” That kind of American authenticity and goodness must first be practiced in preserving the founding vision of the global nation to be a “shining city upon a hill” while continuously praying for Nature’s God to bestow its justice upon the Promised Land for all.

Dr. Patrick Mendis is a Taiwan fellow of the Ministry of Foreign Affairs of the Republic of China and a distinguished visiting professor of global affairs at the National Chengchi University in Taipei. The views expressed in this article are his own; they do not represent the institutions of his past or present affiliations. The author sincerely thanks Joey Wang for his assistance and research.