Political Power Is Dividing a Germany That Was Once Unified 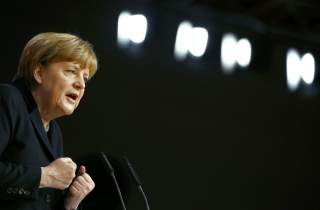 All politics may be local, but the German national election reflected major trends in the political culture of a country at the center of both the European Project and the Transatlantic relationship. These trends need to be understood by Americans who casually assume that Angela Merkel won again. In fact, her party received one vote in three, hardly a mandate. More broadly, the election demonstrated the continuing fragmentation of political power in unified Germany, the sustained alienation of its eastern population from the political cultures of both Germany and Europe, and the increasing delegitimization of German political and economic elites.

The postwar Federal Republic was built around strong political parties on the center-right and center-left. The Christian Democrats, with the Bavarian-Christian Socialists, (CDU/CSU) were the tories of the new Germany, its natural governing party. The Social Democrats (SPD) challenged the conservatives from a position that was genuinely leftist but strongly anti-Communist and anti-Soviet. German workers and voters lived within a structure of power in which government, banks, corporations, labor unions and the media were intertwined (to put it mildly). The system fostered prosperity, security and stability. It also reinforced relations with the United States and European partners.

The integrity of this postwar consensus eroded even before unification, but it was the shift eastward of the political center of gravity with the absorption of the former German Democratic Republic (GDR) that altered everything. The Cold War consensus in western Germany had reflected the realities of a divided Germany and a divided Europe. With Germany no longer a front-line bastion of the Cold War, acceptance of the status quo by younger voters eroded. Germany’s mission in Europe (to foster a “European Germany rather than a German Europe”) looked increasingly expensive to taxpayers, as western Germany undertook to subsidize the new eastern states for a generation. Unification incorporated into the German political demographic people who had no experience with the western system and considerable doubts about it. Most families in eastern Germany had had no practical contact with democratic politics since the Weimar Republic. Their expectations from unification were high, but their lack of sophistication opened eastern Germany to a wave of carpetbaggers from the West, while the most talented young people often found opportunity by moving to the West or beyond.

These were huge societal, economic and political dynamics. Many books have been and will be written about this dramatic (albeit peaceful) episode in redrawing Germany on the European map yet again. The institutions fashioned for postwar realities tried to maintain themselves largely unchanged into a new century for new citizens for whom names like Adenauer and Brandt are musty relics. It could not last. The first political schism came from the decision of an SPD government under Gerhardt Schroeder to adopt neoliberal principles into a party once steeped in Marxism. This led to the separation of the left wing of the SPD to join in 2007 with former East German communists into a new Left Party. This rendered the SPD too small to lead a national coalition and fit only for a subordinate role in a Grand Coalition with the CDU/CSU. The consequence was a loss of voter appeal to the point the SPD won only one vote in five last month. It has retreated into opposition, on the long road to restore its stature with disillusioned Germans on the left, if it can.

The CDU/CSU under Angela Merkel used many years in power to solidify its dominance of an expanded political center and to co-opt policies from the left. In doing so, Merkel left her right flank wide open, on issues ranging from Greek bailouts, to welcoming Middle Eastern refugees without much forethought, to adopting social innovations distasteful to the traditional CDU/CSU electorate such as same-sex marriage. As the world now knows, that exposed right flank is now occupied by an inchoate but dynamic new political force, the Alternative for Germany (AfD).

It is difficult to exaggerate how striking is the swift capture of democratic legitimacy by the AfD. It holds legislative seats in thirteen of Germany’s sixteen states (and will likely win in a couple more) and will occupy ninety-five seats in the national legislature, the Bundestag. The size of the AfD parliamentary victory reflects in part the nature of the German electoral system, as the AfD now has more seats in Berlin than the politically stronger National Front in France has ever managed to deploy in the Assemblée National in Paris. How this disparate group will behave strikes concern into the more traditional parties (and, doubtless, joy into journalistic hearts), for the AfD has no reason at all to cooperate with Merkel on either coalition formation or governing. The AfD was elected to oppose, and it will. Indeed, adding the 13 percent of the vote gained by the AfD with the 9 percent for the Left Party (plus votes for smaller radical parties), nearly one German voter in four opted to oppose their country’s basic constitutional consensus.

Merkel can—with time—assemble a three-party coalition of her CDU-CSU with the liberal Free Democrats (FDP) and Greens, but her fourth term as chancellor will look little like the previous three. Again, she has no electoral mandate, having presided over the worst performance by her party in its history. The Bavarian CSU is running scared after a disastrous election outcome while facing state elections no later than next autumn. The bad blood between CDU and CSU means that, in effect, Merkel will lead a four-party government, something never attempted in Germany since Weimar.

It is this fragmentation of a political structure designed for the stable Bonn Republic which makes the German political landscape look so uncertain. The SPD must at least attempt a reconciliation with the Left Party if it is to bring enough voters back to its standard to again claim its prior status as a “people’s party.” The FDP—which faced potential oblivion during four years out of the Bundestag—must not endanger its restored integrity by much compromise with Merkel. The Greens need credible issues to demonstrate that they are not just holdovers from the sixties counterculture.

Other European countries also have undergone serious political fragmentation, some even worse, but the core role of Germany makes the ability of Berlin to govern and to speak with and for Europe of special importance. This is especially the case because Berlin elites more or less promised their European neighbors that a genuine political force on the right like the AfD would never be allowed to happen. Only months ago, there was an “it can’t happen here” mentality in Berlin. As the genie of the AfD cannot be put back into the bottle (not with ninety-five Bundestag members), the fragmentation of what remains of the German center will be seriously stressed, both by domestic and foreign demands.

There would not be an AfD phenomenon without the continuing alienation of much of the population of eastern Germany more than a quarter century after the opening of the Berlin Wall. The origins, radicalization and mass-voter appeal of the AfD are all in the East. This seems ironic to many, as there are few foreigners and even fewer Syrian refugees in the East, but the most overt Islamophobia in Germany developed in Dresden. The issue of eastern German alienation is complex, but it is based on a victimization mentality from four decades on the wrong side of the wall and the years since as the recipient of West German largesse and condescension. The German Basic Law of 1949 foresaw a constitutional convention in connection with unification, but the former GDR was simply absorbed into the Federal Republic in the manner used for the Saarland after French postwar occupation. Eastern Germany entered the European Union at unification without application, qualifications or any kind of learning curve (much like Gibraltar), leaving its people with no acquired sense of a European identity or understanding of the European Project. Opinion polls show that eastern Germany has the most hostile population to America in Europe, seeing in the country the cynosure of the globalization many regard as the villain to their own victimization.

While eastern Germans live, for the most part, much better than they did in the GDR, nostalgia for those days remains strong as does resentment at the fact that by almost every metric the East does not yet live as well as the West, and may actually be losing ground. (Western Germans tend to dwell on their generosity to the East, adding to the social tensions.) If eastern Germany were an independent country, it would be the oldest on earth (albeit with life expectancies better than in the United States). There is a “grumpy old man” syndrome in the political culture in the East, which may explain how a society with few visible foreigners can feel so threatened by them. People there resent German, European and global trends over which they have almost no influence or choice. Now, to compensate, the grumpiness in the East has a firm stronghold in the Bundestag.