The Political Role of the Russian Orthodox Church 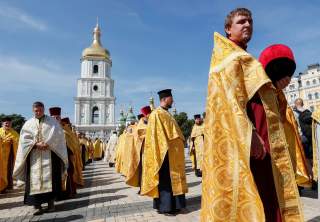 If we want to speak about the role of the Russian Orthodox Church in the Kremlin’s propaganda and information war, then we should take a step back in history and have a look at the situation in the Soviet Union, where propaganda was an essential part of the regime’s activities. The early Bolsheviks had an agitation and propaganda department in the Central Committee of the Communist Party. During the years of the New Economic Policy (1921–1928) this otdel agitatsii i propagandy grew into a huge bureaucratic structure of more than thirty subdepartments for the press, education, science, theater, radio, cinema, training centers and publishing houses. All this was so well organized that it served as a model for Joseph Goebbels, when he became Hitler’s Minister of Propaganda. The Nazi propaganda even used Soviet posters, changing only the texts.

Why Putin Attributed a Central Role to the Russian Orthodox Church

But what is the role of propaganda? Propaganda has a double role. First, it touts the blessings and the benefits of the regime. Second, it attacks the system and the policies of its adversaries. Propaganda contains a positive and a negative message. Both elements are important. In the Soviet Union the positive message was simple: The Soviet Union was the first country in the world where the proletarian revolution had succeeded. Therefore, the Soviet Union was a model. It was the vanguard of the worldwide liberation of the proletariat. The country had, as such, a universal mission. The negative message of Soviet propaganda was attack the “enemies of the working class,” which were the capitalist countries that exploited their working class and the people in the countries that they colonized. In this, Soviet propaganda narrative religion had no place. Religion was, in the words of Marx, “opium of the people,” and, in Lenin’s words, “opium for the people.” It was a false consciousness and it should, as such, be combated because religion, which promised heaven in an afterlife, prevented the workers from making the revolution. When, in 1961, Yury Gagarin was the first man to fly in space, he famously said: “There is no god up here.”

The demise of the Soviet Union changed all this overnight. The new Russia was no longer the vanguard of the world revolution. Communism had lost its appeal. Not only was the Soviet Union a far cry from the equal and just society it pretended to be, but it was also an economic model that showed state-run communism was a flagrant failure. Both the positive and negative parts of Soviet propaganda had lost its contents. Because how could the new Russia attack the capitalist countries at the very moment it was introducing a capitalist economy itself? And how could it present itself as the champion of colonized communities, when the Soviet Union was the last European country to decolonize?

In the new Russia of Boris Yeltsin, there was a complete ideological void. Old ideals and values had disappeared and new ideals and values had not yet been developed. It was in this situation of ideological confusion that Vladimir Putin emerged as a new power factor. In fact, one of Putin’s first activities was to repair this ideological void. In 1998 Yeltsin had appointed Putin as director of the FSB, the follow-up organization of the former KGB. As such, Putin also became secretary of the National Security Council of the Russian Federation. This council produced a new National Security Concept, which was approved by Yeltsin on December 17, 1999. It was one of the last decrees Yeltsin signed. Two weeks later, he would abdicate in favor of Putin. The concept was built around completely new ideas. For instance that safeguarding the national security of the Russian Federation should include “the spiritual renewal of Russia,” and that “the state should encourage the . . . spiritual and moral development of society.” This emphasis on spiritual values in a National Security Concept was completely new. As secretary of the Security Council, Putin had a considerable influence on this formulation. In an autobiographical book, titled First Person, published some months later, he said that he “would fight to keep our geographical and spiritual position,” and made the confession that he wore an Orthodox baptismal cross pendant around his neck. Putin knew exactly how he wanted to fill the ideological void: namely by giving the Russian Orthodox Church a central place in the new Russian identity. It was, in fact, a masterstroke. Why? Because his choice hit many birds with one stone. Making the Russian Orthodox Church the central ideological pillar of the new Russia had at least six benefits. The Church resembled, as it were, a Swiss army knife. A Swiss army knife has many functions. It has knife blades and other various tools, such as a small saw, a nail file, a pair of scissors, a screwdriver, and a can opener. The same seemed to be true for the Church. It had at least six benefits for the regime. What exactly were these six benefits?

How did this new cooperation between the Kremlin and the Russian Orthodox Church work out in practice? This cooperation was for both sides in one word: excellent. In 2007, Foreign Minister Sergey Lavrov remarked that the Church and his ministry “worked hand in hand” . . . “doing together one big work very necessary for the country.” Already before the war against Ukraine, the Church played an important role in the war of nerves waged by Moscow against Kyiv before the outbreak of hostilities. In the summer of 2009, for instance, Patriarch Kirill made a ten-day tour in Ukraine, speaking a lot about the “common heritage” and “common destiny” of Russia and Ukraine. Viktor Yanukovych, who at that time was the leader of the opposition Party of the Regions, accompanied Kirill on a tour to Donetsk.

However, the cooperation between the Kremlin and the Church was not a one-way street. Already in September 2003 Putin had contacted Metropolitan Laurus in New York. Laurus was the leader of the ROCOR – the Russian Orthodox Church Outside Russia—a church founded by Russian émigrés who had fled Russia after the October Revolution. Putin’s proposal for a reconciliation between the two Churches was accepted and in May 2007 the Act of Canonical Communion was signed. This merger brought one million church members in thirty countries under Moscow’s control—in the US alone this included a network of 323 parishes and 20 monasteries. Soon after the Kremlin began to reclaim church buildings in Western countries, which led to many court cases—for instance in New Jersey, in California, but also in Biarritz and Nice in France, as well as in London.

Lavrov’s remarks that the Church and his ministry “worked hand in hand” could not be more true. This became also clear from the role the Church played in international fora. The foreign ministry arranged for instance that in March 2008 Kirill—who at that time still was head of the Department of External Church Relations—could deliver a speech before the Human Rights Council of the United Nations. In his speech, Kirill attacked abortion, euthanasia, and “extreme feministic views and homosexual attitudes.” He also pleaded for the installation of an “Advisory Council of Religions” in the UN. The installation of such a council would mean that the implementation of human rights would be subsumed under so-called “traditional values.” Kirill’s speech was a part of the Kremlin’s attack on human rights. One year before Lavrov had already proposed to set up such a “Council of Religions” in the UN with the task to defend “religious and traditional values.” The UN High Commissioner for Human Rights, Navi Pillay, rejected these attempts to make human-rights dependent on so-called religious, traditional, or cultural values. “In no country,” she said, “any single woman, man or child ever stood to demand the right to be tortured, summarily executed, starved or denied medical care in the name of their culture.” This is interesting because the surprising ideological continuity between the Soviet Union and post-Soviet Russia—which mainly targets through ideological attacks liberal democracy, individual freedom, the rights of minorities, and universal human rights—remain essentially the same. The difference is that today these attacks are not made in the name of communism but in the name of true, traditional, Orthodox Christianity.