The Politics of Russia's Primorsky Krai 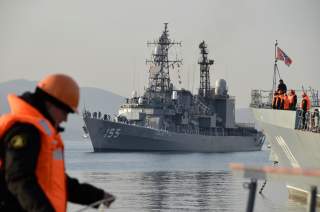 Most nine-hour journeys from Moscow land you on the east coast of the United States. But that is assuming one is flying westward over the Atlantic or crossing the pond, as the Brits like to fondly refer to transatlantic destinations. But a nine-hour journey flying eastwards, over seven time-zones across the Urals and over Siberia, wouldn’t necessarily get you to Japan. It would get you close—right to the eastern border of Russia, the port city of Vladivostok.

Vladivostok is a peculiar place for many reasons. As maritime expert Rockford Weitz reminds us, most people forget that Russia is a Pacific country until they visit the port city. Trade notwithstanding, the city is home to the Russian pacific fleet, a naval bastion whose importance was even more accentuated during the Soviet-era Cold War. Vladivostok is so strategically important that the city was closed to foreigners during the Soviet era; even Soviet citizens needed special permits to enter.

Former Soviet Premier Nikita Khrushchev visited Vladivostok in the 1950s and was besotted enough to genuinely want to work towards making it the Soviet San Francisco. The similarities were evident with both cities being on the Pacific coast and the gale across the ocean lent itself to similar climates. Khrushchev’s goal can be seen in the design of the Zolotoy Bridge and the Russky Island Bridge, closely, though not identically, resembling the structures of the iconic Golden Gate and the Bay Bridge in San Francisco. Communism perhaps precluded Vladivostok from achieving its own Silicon Valley and having an economy comparable to San Francisco. But the city certainly became a key venue for high power political discourse.

The framework of the Strategic Arms Limitation Talks (SALT II) was discussed here in Vladivostok between former President Gerald Ford and then-Soviet General Secretary Leonid Brezhnev. Russian President Vladimir Putin made a conscientious decision to host the APEC Summit here in 2012. The recent cherry on the cake was the high profile summit between Putin and North Korean leader Kim Jong-un which was hosted at the cavernous and state-of-the-art campus of the Far Eastern Federal University (FEFU).

While Vladivostok has been a key figure in politics, the politics of the eastern region of Primorsky Krai are different from the political capital of Moscow and the cultural capital of St. Petersburg. Moscow’s concerns have long been the remnants of the Cold War era: The trust-deficit with the United States, that has only grown prominent since the annexation of Crimea in 2014; the simmering tensions with Ukraine as a result of Crimea and the Donbass region; NATO encirclement and enlargement into once-Soviet territories on its western border that continue to infuriate the Kremlin; and a relationship with the European Union that has never been quiet warm or convivial, given the hand-in-glove relationship between Brussels and Washington.

The name Vladivostok translates to ruler of the east, and in a name, there is an identity. In this case, the eastern identity has formed. Ensconced so far east, the geographic and time difference translates to the political distance between Primorsky Krai and the politically and culturally affluent western Russia. The region is part of the Far East district; the name “far east” itself is almost reminiscent of an anglophone era, subtly indicating that the prosperous pastures belong in the west, whatever is your west (globally or locally).

Primorsky Krai is the eastern most point of East Europe, so east at that point that it stops looking like Europe and starts looking like Asia. So far east, that one tour guide at the state museum of Primorsky Krai, described Vladivostok as the edge of the world, and if the flat earth theory held true, then we’d fall off if we went any further east.

It’s one hundred kilometers from China’s northeastern border, with Harbin being the closest major Chinese city and just an hour flight away from Sapporo in Japan. Pyongyang is under 700 kilometers away and hence it’s no surprise that a lot of diaspora in the Russian Far East has Asian roots, with a huge population of Russian Koreans (so Russian, that some of them can’t speak Korean) and migrant labor from North Korea and China.

Vladivostok is closer to Alaska and Hawaii than it is to Moscow. And Alaska and Hawaii serve as fitting examples for states that aren’t the quintessential red, white, and blue “all American” states. Asking residents of Primorsky Krai to gauge the pulse of Moscow, is akin to asking residents of Anchorage or Honolulu if they feel an intimate bond with Washington, DC or New York City.

As FEFU academic Tamara Troyakova tells me over lunch in Vladivostok, “When we [residents of the Far East] wake up, they [Muscovites] fall asleep, and when they start work, we end work. So how can they think for us or feel what we feel?” Physical factors of geographic distance once influencing the intangible political distance.

“We are so far away and they don’t even call us the Pacific capital of Russia” says Alexey Starichkov, director of the Primorsky Krai Department of International Cooperation. Local government officials see Primorsky Krai as a Russian outpost in the Asia-Pacific region. Starichkov confidently states that Primorsky Krai influences Russia’s Eastern & North Asia policy.

Starichkov’s message is vindicated by the fact that Vladivostok has the most number of diplomatic missions after Moscow and St. Petersburg. Furthermore, six of the seven consulates operating in the region belong to Asian countries—China, India, Japan, North Korea, South Korea, Vietnam—with the sole exception being the United States.

The Primorsky Krai region has trade worth $700 billion. External trade and exports with Asian behemoths run into billions of dollars: $300 billion split between China, Japan and South Korea.

Sino-Russia relations have seen the ebbs and flows from the days of Mao Zedong and Joseph Stalin to a special friendship between Xi Jinping and Vladimir Putin, who perhaps found common ground in being seen as threats to the United States’ position at the top of the geopolitical totem pole. But officials in Primorsky Krai remind me that a lot of Russia’s relationship (half, to be specific) with China is a result of the eastern region.

Both countries have major economic forums on either side. The Eastern Economic Forum, started in 2015, is Putin’s brainchild and is held every year in Vladivostok to foster closer economic cooperation between the Russian Far East and its Asian neighbours. Meanwhile, the summer Davos or Davos of the East goes to the port city of Tianjin in Northern China.

Japanese diplomats at the consulate in Vladivostok remind me that Japan is another strong ally. This notwithstanding a natural historic bond with the United States. Japanese prime minister Shinzo Abe has had over twenty meetings with Putin and attended the Eastern Economic Forum in 2018, while Putin returned the favor, by visiting Japan in June. Putin and Abe have agreed to rejig the council of governors which will increase interactions between governments (such as the Far East) of various districts and provinces in both countries. Timber trade between the two countries flows through Primorsky Krai with Japan being the major importer.

What Japan exports, it makes up for in exports with a vast number of automobile imports to the Far East. The roads in the east are teeming with Mazdas, Toyotas, Hondas and Nissans; hailing from a practice of importing cheap second hand automobiles from Japan during the Cold War era. Back then, tense relations with the West precluded significant imports of American and other Western automobiles. While Russia, like so many non-commonwealth countries, drives on the right-hand side of the road, the prevalence of Japanese car models means that you have right-hand driven vehicles on the right side of the road. A peculiarity evinced in Vladivostok over its western counterparts.

Ural Airlines has frequent flights to Hokkaido from Vladivostok. The Far East constitutes nearly ten percent of the total tourists visiting Russia, however Japanese tourists don’t exceed more than twenty-four thousand a year. Japanese diplomats at the consulate in Vladivostok tell me that it’s due to the lack of visa free access that exists between Japan and Russia.

However, South Korea and Russia do share visa free access and flight connectivity between the Russian Far East and Seoul, seeing between ten to fifteen flights per day. There has been a tourism uptick in the Far East and on average South Koreans make up one hundred thousand in tourist arrivals.

A short drive outside Vladivostok will take you to the small town of Ussuriysk, home to several Russian Koreans, which enhances the cultural link between the two countries.

The elephant in the room is the other Korea. The two share a seventeen-kilometer border along the lower Tumen River, linked together by a bridge called the Friendship Bridge, alluding to the warm ties shared between Russia and the DPRK.

Publicly, both Russia and North Korea are allies, a relationship which precedes the very founding of the Hermit Kingdom. North Korea was once under the rule of the Soviet Civil Administration from 1945 to 1948. The ties strengthened with Soviet involvement as an ally in the Korean War of 1950. Putin is credited for improving ties with Pyongyang, which had seen a lull following the collapse of the USSR. The Far East’s proximity to North Korea means there has been a steady stream of North Korean migrant workers and North Korean restaurants in the city. Even Pyongyang’s cargo jets get refueled at Vladivostok International Airport.