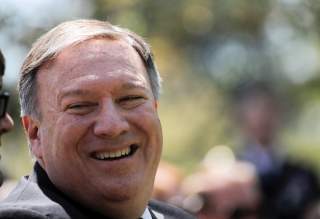 Secretary of State Mike Pompeo gave short remarks to State employees Tuesday afternoon. It was his first formal address to staff as secretary, and his comments were clearly intended to contrast himself with his short-lived predecessor, Rex Tillerson.

For one thing, Pompeo did not thank Tillerson during his remarks.

“I’ll spend as little time on the seventh floor — I think it’s the seventh floor, right?” Pompeo said to audience laughter. Pompeo’s reference was to the executive suite of the State building in Washington.

Tillerson’s tenure, from nearly the beginning, was beset with criticisms that the former ExxonMobil CEO cloistered himself on the seventh floor, only dealing with a small coterie of aides, namely Margaret Peterlin, his chief of staff, and his political pointman Brian Hook.

It’s not the first time Pompeo has contrasted his work-style with Tillerson’s. When murmurings—and then reporting, including in the National Interest—began last fall that Pompeo could replace Tillerson, Pompeo gently needled the infamously process-obsessed Tillerson in describing how he oversaw the CIA: “I’ve asked everyone to say, ‘Do not print the org chart out!’ I mean look, the finest companies in the world are restructuring their team every day. ...Start with mission, not with org chart. The organization and the team will fill itself out if everyone’s focused on the mission.”

Pompeo went out of his way to assure staff he deeply values their work. The secretary said that he will seek to revamp the department, one that is widely perceived as diminished by Tillerson’s tenure and at the mercy of a president ambivalent about traditional diplomatic methods.

He called those assembled “the most important diplomatic corps in the world.”

“I know, for certain, that America… can’t achieve its objectives absent you all. Absent executing American foreign policy in every corner of the world with incredible vigor and incredible energy. And I am looking forward to helping you all achieve that,” Pompeo said.

Pompeo made clear: “I am humbled to be here.” The department needs to get back its “swagger,” the secretary said.

And of an administration that has been criticized for failing to fill many ambassadorships, Pompeo said: “The United States diplomatic corps needs to be in every corner, in every stretch of the world, executing missions on behalf of this country.”

At the same time, Pompeo highlighted both his ties to the president, which Tillerson never developed, as well as the administration’s renewed commitment to the department.

Pompeo announced that Donald Trump will make his first trip to State headquarters on Wednesday.

“Much of the cabinet” is set to join him, as well, he said.