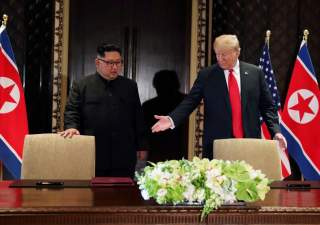 Isolation has not been entirely to North Korea's disadvantage, even if the extent of that isolation may have exceeded its utility. During the height of the Cold War, 90% of East Germans could watch West German television, and the reality of day-to-day news reporting and glimpses of Western standards of living had an enormously corrosive effect on the German Democratic Republic's ability to limit public expectations. Prospects for hordes of South Koreans, Americans, or even Chinese swarming all over Pyongyang or an exclusive economic zone would be viewed as destabilizing by the North Korean security services, not to mention the North Korean political leadership. If America wants to avoid scaring Kim off, Washington may need to emphasize that economic development would proceed at a measured, controllable pace.

Offering to normalize diplomatic relations with North Korea is another possible enticement for Kim. This move would confer an additional degree of legitimacy on North Korea that he would no doubt welcome. A related question would be establishing a U.S. Embassy or representative office by another name in Pyongyang. That would mean friendly, Korean-fluent U.S. diplomats wandering around the capital, speaking with and possible influencing North Korean elites, and serving as a visual, physical symbol of the democratic and prosperous U.S. system. (North Korean diplomats at the UN already serve as de facto representatives to the U.S.) North Korean security services might balk at such a move, although they seem to have tolerated the presence of Western representatives of the World Food Program, among others. Kim might best be incentivized with an offer to establish relatively small liaison offices, to start.

A major incentive for Kim would be a peace treaty officially ending the Korean War. The political theater involved would be momentous, but the practical implications are mostly negative for the United States. A peace treaty would make it politically difficult for the U.S. to tighten sanctions against North Korea or even enforce them, given the predictable euphoria in Seoul and the inevitability that Beijing and Moscow would fully capitalize on the new atmosphere. Additionally, pressure on U.S. troops to withdraw from the South would intensify. The United Nations Command in Korea would be abolished, as would the United Nations Command-Rear in Japan, both of which help legitimize the U.S. military presence in their respective countries. The sense that North Korea is standing alone against the world community would diminish, and U.S. military cooperation with South Korea would be circumscribed by the perceived need to avoid being "provocative." America must plan for this eventuality, but must also make clear to Kim that a peace treaty will only materialize in the final stages of the denuclearization process.

If Not Now, When?

The North Koreans have expressed support for complete denuclearization of the Korean Peninsula much in the same way that old Soviet leaders used to show support for world peace—as a pleasant fiction. The United States needs to make clear that it expects rapid, visible, and physical progress by North Korea on CVID. If Kim balks even at this incremental approach, at least it will be clear to the world that America went the extra mile to give North Korea every possible chance to negotiate its way to a solution.

Thomas Cynkin is the Vice President of External Affairs at the Daniel Morgan Graduate School of National Security. He is also a former Foreign Service Officer and was the Asian affairs advisor to two U.S. Ambassadors to the U.N. and two Deputy Secretaries of State.

Image: FILE PHOTO: U.S. President Donald Trump and North Korea's leader Kim Jong Un (L) arrive to sign a document to acknowledge the progress of the talks and pledge to keep momentum going, after their summit at the Capella Hotel on Sentosa island in Singapore, June 12, 2018. REUTERS/Jonathan Ernst/File Photo