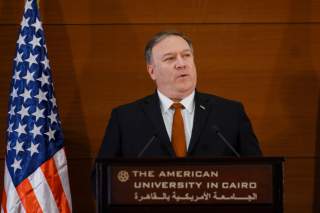 Amid continued confusion over the Trump administration’s policy in the Middle East, Secretary of State Mike Pompeo delivered a major speech in Egypt on Thursday. It was an attempt at evisceration of the prior American administration, as Pompeo explicitly castigated President Barack Obama’s 2009 Cairo address.

“The age of self-inflicted American shame is over,” Pompeo said. First vaulted into politics in the 2010 Tea Party wave, Pompeo, the former congressman, sounded note after note condemning what many on the Right previously condemned as an “apology tour” approach from the Obama administration.

“Remember: It was here, in this very city, another American stood before you. He told you that radical Islamist terrorism doesn’t stem from ideology,” Pompeo said. “He told you 9/11 led my country to abandon its ideals, particularly in the Middle East. He told you that the United States and the Muslim world needed ‘a new beginning.’”

Pompeo, of course, was speaking at the invitation of Egyptian President Abdel al-Sisi, who ousted his predecessor, the elected, Muslim Brotherhood-supported Mohammed Morsi. Morsi rose to power after the United States allowed its longtime ally, President Hosni Mubarak, to be overthrown in the Arab Spring.

For Pompeo: “The results of these misjudgments were dire.”

Much of Pompeo’s address was consistent with how large swaths of the Trump orbit—Stephen K. Bannon, Jared Kushner and administration-friendly think tanks like the Hudson Institute, Foundation for Defense of Democracies and the Security Studies Group—see the White House’s policy in the Middle East: contra both the Bush and Obama administrations.

This group rejects charges of Islamophobia. Instead, they favor what they see as a new, tough-minded posture in the world’s central, troubled theater—one that does not hesitate to do business with authoritarian leaders. An official at FDD told me Thursday he hopes the administration resurrects the term “principled realism,” first commonly enunciated by departed National Security Council official Michael Anton. In this view, Bush, a neoconservative, was in favor of democracy promotion and tough on radical Islam—but the former stance fueled the latter. See: the elections of Hamas in Palestine, Hezbollah in Lebanon and the toppling of U.S. clients like Mubarak in Egypt.

Obama, by contrast, was much more “anti-war” than Bush but favored democracy promotion and was allegedly weak on radical Islam, particularly Iran. And, in this view, Trump at his best is clear-eyed: skeptical of democracy promotion and tough on radical Islam. Pompeo dismissed the idea that America has imperial aspirations, declaring that it is a “liberating” force, not an occupying power.

“Secretary Pompeo’s remarks about empire are crucial,” Brad Patty of SSG told me. “America seeks friends and partners, but we will leave if you ask us to leave.” The problem for some in this contingent, and where it gets confusing, is that it could easily fall apart. Trump’s announced pullout in Syria—if it’s not all-but-dynamited by his tenacious national security advisor, John R. Bolton—could undermine the anti-Iran posture (though some in SSG disagree).

The Trump administration’s antipathy toward Iran is fundamental. Pompeo declared that America would “expel every last Iranian boot” from Syria without explaining how it would do this. The hostility to Tehran isn't rooted so much in the fact that it isn't a democracy, but that the Iranian leadership consists of theocrats. Erdogan and Turkey are a soft version of Iran—its leadership class a little more democratic and less theocratic than Tehran. But that perceived, relative moderation could be a problem, as well, down the line. “Most dangerous country in the world,” a former senior White House official told me.

But many who favor an approach of American foreign policy based on realist precepts see a slew of distinctions without much functional difference—the United States is leaving a still-too-heavy footprint in the region, and Washington is now too flippant about past American overreach.

“President Trump promised an end to military interventions and adoption of a realist foreign policy, yet Secretary of State Pompeo is openly advocating for a more hands-on posture,” Daniel L. Davis of Defense Priorities told me. “Pompeo characterized Iran as a powerful force in the region that can only be restrained by the combined weight of the United States and most of the Middle East. The truth is Iran is weak, has a paltry military, an anemic economy, represents at most a regional nuisance—not a serious threat to U.S. national security—and can easily be contained by our allies in the region.”

“If Obama’s Cairo speech ten years ago was an unsuccessful attempt to acknowledge the failures and mistakes of American policy in the region, Pompeo’s was a lecture directed against all critics of U.S. foreign policy,” Daniel Larison of The American Conservative said. Pompeo himself left no doubt that he sees America as a virtuous, crusader nation: “It is a truth that isn’t often spoken in this part of the world, but I’m a military man by training, so I’ll put it bluntly: America is a force for good in the Middle East. Period.”