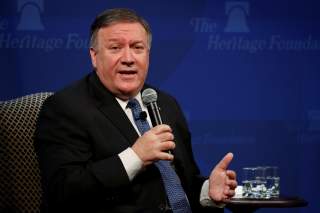 Secretary of State Mike Pompeo took center stage at the Heritage Foundation in Washington Monday morning, laying out the administration’s strategy after President Donald Trump announced U.S. secession from the Joint Comprehensive Plan of Action (JCPOA), or Iran deal, earlier this month. Iranian failure to meet a series of U.S. demands—including Iran’s withdrawal of forces from Syria—would result in the “strongest sanctions in history,” Pompeo said.

“President Trump withdrew from the deal for a simple reason: it failed to guarantee the safety of the American people from the risk created by the Islamic Republic of Iran,” the secretary said. “No more.”

For Pompeo and Heritage, the event was high-stakes. For Pompeo, it was his most specific enunciation of views on the subject since assuming the mantle at Foggy Bottom this month.

Much of Pompeo’s early tenure has been focused on North Korea, with two high-profile visits to the country already. The scuttled Trump administration ambassador to South Korea, Victor Cha, told a small crowd in Washington earlier this year that Pompeo had been given the North Korea “portfolio,” while new National Security Advisor John Bolton has been given the same for the Middle East and Russia.

As a congressman, Pompeo was a hardliner on Middle Eastern issues—a vociferous critic of the JCPOA—and among the most hawkish on Syria’s Bashar al-Assad, even when that position lost favor on the right, including with then-presidential candidate Donald Trump.

But compared to Bolton, Pompeo has been perceived to be a relative restrainer. Pompeo is a likely future candidate. And as Thomas Wright put it in a piece in Politico earlier this month:

Pompeo has a longer time horizon than Bolton. He needs his term as secretary of state to be a success and recognized as such. He can’t afford his own version of the Iraq war, whether it is against Iran or North Korea.

At the very least, however, Pompeo played team ball on Monday morning. The secretary laid out twelve hardline demands, and hailed the end of U.S. participation in the JCPOA as a means to an end to American abetting of “wealth creation for Iranian kleptocrats.”

As of Monday morning, Pompeo and the United States have declared in no uncertain terms that their demands for a new deal with Tehran include a total ban on uranium enrichment and an end to Iranian support for regional militant groups—both likely nonstarters.

“This will only lead to one thing: Confrontation,” said National Iranian American Council Trita Parsi. “Perhaps THAT IS the strategy.”

Indeed, Pompeo has reiterated U.S. support for Iranian protesters, some of whom seek to overthrow the government. On Monday, Pompeo challenged the Iranians to consider what kind of nation they want to be.

During U.S. participation in the JCPOA, Iran “continued to be the world’s largest sponsor of terror,” the secretary said at Heritage on Monday, adding that Iran “continues to serve as sanctuary to al-Qaida, as it has done since 9/11, and remains unwilling to bring to justice senior al-Qaida members residing in Tehran.”

“Today we ask the Iranian people: Is this what you want your country to be known for?” Pompeo said.

He was swiftly cheered by hawks.

“This Pompeo speech is the speech [former Secretary of State John] Kerry should have delivered in 2013, before the Obama Administration agreed to pay Iran nuclear blackmail, and before it agreed to turn a blind eye to an insanely long list of terrible behaviors,” said Jonathan Schanzer of the Foundation for the Defense of Democracies (FDD). Schanzer has previously spoken to me about countries Iran is friendly with, including Qatar, which Schanzer charges is “the ATM of the Muslim Brotherhood.”

But Pompeo said if Tehran assents to the “major changes” he laid out, then the United States is prepared to lift all sanctions, and restore full diplomatic and commercial ties—a status not enjoyed since the revolution, nearly four decades ago.

Pompeo’s address “signaled to a broad coalition of countries threatened by Iran regime as well as those who must choose [between] U.S. & the regime, there’s a diplomatic path forward. And U.S. prepared to put big concessions on the table if big demands met,” said Mark Dubowitz, also of FDD, who calls the approach “risky,” but workable. Dubowitz, a self-proclaimed “fixer” of the Iran deal—not a “nixer”—and his role in the JCPOA debate have been much maligned by champions of the deal. But Dubowitz and Iran hawks aren’t resting easy, concerned that the administration will parallel a tough line on Iran with a pullout in Syria—a net loss, from their perspective. “If Trump gives up Syria to the Iranian regime, it’s game, set and match [Islamic Revolutionary Guards Corp chief] Suleimani,” Dubowitz said.

But restrainers warned Pompeo’s requests weren’t workable—not even close. “Pompeo’s wishlist for Iran is massively unrealistic.The only thing he’s not asking for is Iran to rename itself the Former Yugoslav Republic of Iran,” tweeted Emma Ashford of the CATO Institute. “Pompeo’s speech isn’t a strategy. It’s a fantasy.”