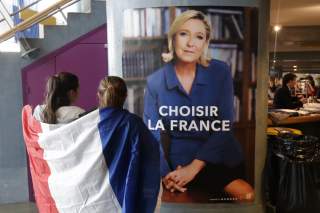 Back in 2013, when British Tory voters appeared to be defecting to the United Kingdom Independence Party (UKIP), the writer Peter Hitchens turned to vivid imagery. “Loyalty cannot be counted on under all circumstances,” he warned in the American Spectator. “And when it crumbles at last, it is as if a mighty river has escaped from its banks and levees. Nobody can be sure where the flood will go, and it is hard to be certain that it can ever be contained again.”

A little over three years later and it seemed that deluge had arrived, as voters severed their traditional loyalties to both center-left and center-right causes and went in search of insurgency. It wasn’t just the UK. A great populist tidal wave was crashing down on the West, washing away stale dichotomies, leveling consensuses. Donald Trump was president. Britain had voted to depart the European Union. Marine Le Pen was ascendant in France. Peoples everywhere were taking it upon themselves to throw out their political elites, and the floodwaters seemed unlikely to recede anytime soon.

Yet they did. Only six months after Trump’s shock victory, aspiring French president Le Pen flamed out against Emmanuel Macron, also a reformer but one far more steeped in the European mainstream than she was. In the Netherlands, Geert Wilders’s populist Party for Freedom (PVV) failed to win a plurality of parliamentary seats in elections held last month. Now in Germany the ultimate repudiation looms, as Angela Merkel—nemesis of European populists who loathe her mass admission of refugees—takes a comfortable lead over her socialist opponent ahead of this month’s elections. The Euroskeptic Alternative for Deutschland party, Germany’s UKIP, has been relegated to single digits.

You see it in the numbers; you see it also in the attitudes of European elites towards populist apotheoses like Brexit and Trump. On the former, EU leaders are increasingly dismissive of Britain’s quest to decamp from their superstate. France’s ambassador to the UK revealed back in July that Brexit was “not a priority” for the EU, and the European Parliament’s chief Brexit negotiator Guy Verhofstadt has lately been condescending to the Brits in their own newspapers. A televised debate between the top two candidates for German chancellor yielded not a single mention of Brexit. Add in a British election that unexpectedly downsized Theresa May’s government, and the EU is feeling more confident than at any time since the referendum. Alleviated from the pressure of spreading Euroskepticism, Brexit has become a less pressing affair.

Trump, meanwhile, was brushed off in Merkel’s famous beer hall declaration back in May. “The times when we could completely rely on others,” she said, “are, to an extent, over.” It was a quixotic statement, given how thoroughly reliant Germany is on the United States for its security guarantees, but it was also a telling one. Trump’s failure to amen the entire neoliberal catechism has left Merkel hailing the French/German pillar as the West’s best hope, with Macron as her willing deputy. She views America’s and Britain’s recent populist turns as abdications, not democratic mandates, which will shift power away from the transatlantic alliance and towards continental Europe. She intends to outlast Trump, who she now believes is more likely to damage America than the European order.

What happened? Why did the formidable populism of yesteryear suddenly give way to elite optimism? One reason is that those motivated to vote for populist parties, whether for reasons of economic decline or cultural alienation, were always outnumbered. Marine Le Pen’s supporters might have had zeal, but they amounted to only a third of the total vote against Emmanuel Macron in France’s runoff election, while the Dutch PVV managed 13 percent in a crowded field. Even Donald Trump, the most talented personality in the insurgent lineup, mustered only 46 percent of the American popular vote. Only Brexit managed a true majority, 52 percent, though its deep historical context and attachment to less populist libertarian sentiments make it a trickier case.

The most ardent populists—Appalachians and Rust Belters in America, Northern Englishmen weary of economic decline, natives of France’s former industrial heartland—simply don’t constitute enough of their respective electorates to win majorities. That makes them dependent on more traditional conservative voters who might be sympathetic to anti-establishment rhetoric but often have fewer grievances and are less passionate. If you’re Donald Trump, you can animate them enough to form an effective coalition. But if those voters find appeal in a Rorschach-blot reformer (Macron), detect a backbone in their center-right party (the Netherlands) or are just wary of radically disrupting the status quo (Germany), the revolution can end as abruptly as it began.

We shouldn’t underestimate that last one in particular. Chesterton’s dictum about not taking down a fence until you know the reason it was put up is a powerful force on man’s psyche, which is why most Europeans don’t want to give up on the EU despite their problems with it. Risking damage to the here and now in exchange for a hazy oasis years ahead is always a tough sell. Still, don’t rule out the insurgents yet. As Macron’s missteps plunge his poll numbers to sub-Trump levels, as global elites continue to duck the lessons of 2016, the populist gusher could still come roaring back.