Populist Insurgents Could Be Victorious in 2018 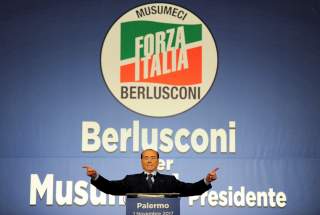 Just as in the United States, the rise of both Donald Trump and Bernie Sanders in 2016 was driven by economic uncertainty and rage against politics as usual—two very different anti-establishment parties are on the move in Italy, driven by the same factors.

The populist Five Star Movement, led by Luigi Di Maio, most closely resembles Trumpism, with a desire to turn back illegal immigrants in the country and its opposition to the European Union. The Free and Equal Party, led by Pietro Grasso, is a left wing splinter party more in the mold of Sanders. It splintered off from the Democratic Party over former Prime Minister Matteo Renzi’s moderate policies.

Anti-establishment populist candidates could be in a strong position in 2018 elections abroad, delivering what Americans experienced in the 2016 election. Radical movements are nothing new in Europe and Latin America, but are often the proverbial dog that wouldn’t know what to do if he caught the car. Dogs can’t drive. Fringe parties—in most cases—haven’t governed.

Still, what we would view as Trump/Sanders-style political movements have a decent shot at victory this year in Italy, Mexico and Brazil, according to a broad assessment of 2018 politics by the Washington political strategy firm Mehlman, Castagnetti, Rosen and Thomas.

In Italy, Renzi stepped aside in late 2016 after voters rejected his proposed constitutional reforms, and Paolo Gentiloni became prime minister.

Neither the Five Star nor the Free and Equal party is likely to win a majority, but they could shift the balance of the multi-party parliamentary elections to be held on March 4. For the most part, only four parties are relevant. The other two are the ruling center-left Democratic Party, led by Gentiloni, and center-right Forza Italia Party, led by former Prime Minister Silvio Berlusconi.

Italy is ripe for a shakeup. The country had 1.7 percent growth in the third quarter of 2017, but unemployment is more than 10 percent, debt is more than 100 percent of the gross domestic product and about 120,000 refugees came to Italy fleeing civil wars in Syria and Libya last year.

The center-right and center-left parties could likely form a coalition government. Berusconi has said Gentiloni should remain as prime minister to maintain stability. However, Five Star is running second to the Democrats.

The problem for Five Star could be that even if it wins the most votes, it might not gain control of parliament. That’s because Di Maio has said his party won’t give any cabinet posts to members of other parties. That’s hardly an incentive for any other party to form a coalition. Still, politicians in any country become more pragmatic when power presents itself.

Mexico votes on July 1, where much of the election is based on the Trump administration policies. Trump’s approval numbers are even lower in Mexico than in the United States.

Mexico City’s mayor, Andres Manuel Lopez Obrador, commonly called AMLO, has come close to winning the presidency in the past. He’s been a perennial presidential candidate, but now he’s the frontrunner who has held a double-digit lead. He’s the leader of the left wing National Regeneration Movement.

Clearly not ideologically aligned with Trump, AMLO called the American president’s policy on border security, “poisonous, hateful, xenophobic.” However, he is somewhat stylistically like Trump. He’s a Mexican nationalist and claims a past election that he lost was rigged. He’s critical of the North American Free Trade Agreement, but wants to tweak it rather than ditch it as Trump promised during his presidential campaign. Though, Trump seemingly will keep the agreement in place too.

Also, center right is Margarita Zavala, the wife of former President Felipe Calderon, who beat AMLO in the 2006 Mexican election. Zavala split with her husband’s National Action Party to run on her own ticket, finding fault with the current party’s leadership.

The term-limited incumbent President Enrique Pena Nieto’s Institutional Revolutionary Party is running Jose Antonio Meade, a former finance minister for the presidency. Meade, considered highly qualified for the presidency based on his vast government experience, is trailing badly because his party has been besieged by corruption scandals.

Besides its relationship with the most powerful country in the world, the other big issues facing Mexico are weak economic growth, increased violent crime and drugs. So, it’s unfortunate that one of the four candidates elected to tackle these big issues will only have a plurality of the country’s backing.

The Brazilian candidate who has drawn the media comparisons to Trump is the mayor of Sao Paulo, Joao Doria, who was just elected to lead the country’s largest city last year. Before jumping into politics, he was known for being a prominent businessman and (no joke) actually the host to Brazil’s version of “The Apprentice.” He’s rallied populist sentiments and also likes to use Twitter. Though, it’s not a certainty that he will run.

President Michel Temer was accused of racketeering and obstruction of justice as he was running for re-election. He took over after the impeachment of President Dilma Rouseff in 2016. Termer has initiated more free market economic reforms. But the “Lava Jato” scandal has left him with a single digit approval ratings.

Another near candidate was former President Luiz Inacio Lula da Silva, who was convicted for money laundering. Despite that, the leader of the left wing Workers’ Party was the frontrunner in most polls. His comeback was cut short however when an appeals court determined “proof beyond reasonable doubt that the ex-president was one of the actors, if not the principal actor, of an ample corruption scheme.” Brazilian law prevents anyone whose conviction was upheld on appeal from running for office.

This has all created a great atmosphere for anti-establishment.

Jair Bolsonaro, a member of Congress, has called himself a “threat to the stubbornly corrupt.” He’s also a right-wing candidate known for controversial comments about women, but he’s running second in polls.

There is no certainty that populist insurgents will be victorious in these countries. Unorthodox candidates gave false alarms elsewhere in 2017. The Labor Party made a strong showing in Britain, but the rather wild-eyed Jeremy Corbyn did not become prime minister, while the far-right Marine Le Pen did not become president of France. Still, the rise of populism is very real, particularly at a time when establishment governments have failed to deliver for their citizens.

Fred Lucas is the White House correspondent for the Daily Signal. The views expressed are solely his own. Title and publications listed are for identification purposes only.