The Portland Predicament: Walking the Line Between Homeland and Domestic Security 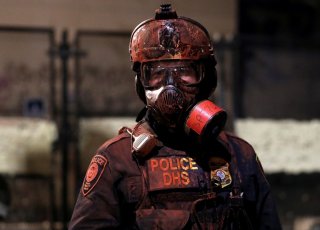 Rioters besieged the federal courthouse in Portland for weeks. As the violence escalated, federal officers from the Department of Homeland Security arrived on the scene to protect the property.

Earlier this week, after the state of Oregon agreed to provide better security for the facility, the governor jumped on Twitter and announced “the federal government has agreed to withdraw federal officers from Portland. They have acted as an occupying force & brought violence.”

This Pravda-like statement suggested that the federal government was in the wrong. It wasn’t. Not only was the action appropriate, it is completely consistent with the reason why the Department of Homeland Security was created to begin with.

Present at the Creation

The American approach to domestic security has always differed from that of most European countries. Historically, European states employed the same instruments for domestic security that they used against external threats. There were no constitutional checks and balances on the sovereign’s use of force. The same armies and spies European kings used to pummel each other could also be turned on their own people on a whim. That was a problem.

Over the course of the seventeenth century, however, the British evolved a different approach, limiting their sovereign’s ability to use military forces on British soil. Americans drew from their British roots and added some refinements. They established a constitutional order that sought to decentralize domestic security and focus federal power largely on responsibilities to deal with external enemies. This order was established in the Constitution through both the checks and balances of the branches of the federal government and the principle of federalism, parsing the responsibilities of federal authorities and states.

The American conception of domestic security made perfect sense. Freedoms were better protected by limited government and decentralized authority. States and local governments were better suited to address local public safety issues. That is why, for example, states were authorized to raise and maintain state militias—not to fight their own wars, but to help maintain public order if need be.

Those wily Americans were smart. They knew that neither America’s domestic nor its external security conditions would remain static. As America grew and changed, so would those who were out to increase the freedoms and prosperity of Americans. Thus, the constitutional order created space for America to adapt to new conditions and threats.

Democracy was definitely not meant to be a suicide pact. There would be instances where the federal government might have to reasonably get involved in domestic security. There could be disputes with or among states. States overwhelmed by threats or disasters might need assistance. There could be external enemies inside the United States—saboteurs, spies, anarchists, etc. In all of these instances, the federal government might have to intervene to protect the civil liberties of citizens and provide equal protection under the law.

The way in which Americans practiced decentralized domestic security would have to evolve but in a prudent manner consistent with the Constitution and respectful of traditions and history. And, so, the history of U.S. domestic security is one of continuity and change. Federal law enforcement, for example, evolved to deal with interstate crime. Federal authorities expanded domestic operations to respond to national security threats and civil rights enforcement.

Mostly, Americans got it right. Sometimes they got it wrong. The Woodrow Wilson administration committed many civil rights abuses during World War I. Franklin D. Roosevelt did the same during World War II. Under the Lyndon Johnson administration, overly aggressive law enforcement and intelligence officers investigating the civil rights and anti-war movements committed unlawful acts. Even when the country got off track, however, it relied on the constitutional order to bring it back into balance.

The terrorist attacks on 9/11 brought about one of the most dramatic changes in the American domestic security architecture: the creation of the Department of Homeland Security. But this new creation was in keeping with the tradition of continuity and change.

THe Department of Homeland Security was not created of whole cloth. Rather, it was cobbled together by combining existing agencies into one department. For the most part, these agencies performed the same functions they always had, only now they were grouped under one department. The Coast Guard is a good example. Both a uniformed military service and a federal law enforcement agency, it continued in those roles after being folded into the department.

The creation of Homeland Security made sense. In the modern world, many global threats can no longer be parsed neatly into purely domestic or foreign threats. Cooperative efforts between agencies responding to foreign threats and protecting the homeland became a greater imperative. This proved important not just for dealing with transnational terrorism, but other threats like foreign meddling in U.S. elections.

Homeland Security also plays an important role in backstopping other federal agencies and states in times of crisis. We have seen this in its response to large-scale disasters such as hurricanes and pandemic. We have also seen it in security situations. In 2014, under the Obama administration, Department of Homeland Security Secretary Jeh Johnson deployed additional officers of the Federal Protective Service to federal buildings around the country in response to a heightened threat of terrorist attack.

Today, the department is performing not only according to its authorities under law but exactly in the manner consistent with its mission.

Claiming that the department’s law enforcement officers are an “occupying force” is a lie.  They were deployed to only one city—Portland. (Additional agents briefly deployed to Seattle to deal with a potential threat, and quickly redeployed when the threat did not materialize.) The department’s Federal Protective Service has responsibility for the security of federal buildings. However, the service had only a handful of personnel available to protect federal buildings that were being attacked nightly by hundreds of rioters. Additional officers were sent for the sole purpose of protecting the building and their fellow officers.

Once deployed, these officers did not interfere with “protestors.” They did, however, have to deal with organized criminal activity intended to intimidate officials, destroy property and injure law enforcement officers. Every person they arrested, about ninety in total, were connected with criminals who attacked the building or federal law enforcement.

In performing their duties, the homeland security officers wore their regular duty uniforms; they followed established law enforcement procedures; they operated well within their legal authority.

Moreover, contra the governor’s tweet, Homeland Security did not provoke the violence. Violence in the city raged for many weeks before the officers deployed. They only deployed when there was a direct threat to federal property and officers, and local law enforcement had proved incapable of—or unwilling to—provide adequate security.

Homeland Security is doing its job. The system, however, was not designed for them to do everything. Indeed, it cannot. The entire federal law enforcement cadre, every agency, isn’t much bigger than the police force in New York City. The federal government couldn’t police every city, even if it wanted to.

Public safety works best when federal, state, and local authorities work together. We have seen that again and again, in city after city, in crisis and disaster. The problem in Portland is that city and state officials are not working together. The attackers on the federal building, for example, have established staging areas in city parks and streets. If the city policed the areas under its jurisdiction, then the organized attacks on federal property would not be possible.

Homeland Security agreed to scale back its presence in Portland, not because it was “an occupying force,” but because the governor of Oregon agreed that the city and state would police the streets around the federal courthouse.  Further, the department has said it will draw down its numbers only after the city demonstrates that it can police its own streets.

The organized attacks at the federal courthouse in Portland are more than a localized threat to lives and property. They threaten to undermine the basic American value of equal protection under the law. Of course, Homeland Security should cooperate in dealing with this threat. But the real problem is that state and local governments are not doing their part.

The solution here is not to demonize Homeland Security. Federal, state and local must cooperate to take organized crime off the streets.