A Portrait of the Russian President 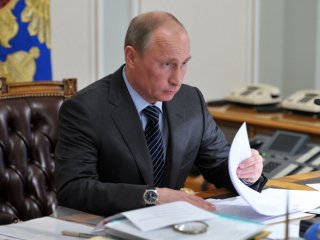 He had essentially adopted the American mindset he had denounced during the Iraq War. With this success under his belt, he saw no reason to cease activity in the region, sending Russian troops and materiel into Donetsk and Luhansk Oblasts in Eastern Ukraine to aid pro-Russian rebels. Ultimately, Myers writes, Putin was asserting his right to ignore the West’s rules, “shunning its ‘universal’ values, its democracy and the rule of law, as something alien to Russia, something intended not to include Russia but to subjugate it.”

Interestingly, it is not until the very end that The New Tsar arrives at what essentially amounts to Myers’s thesis:

“[Putin] had restored neither the Soviet Union nor the tsarist empire, but a new Russia with the characteristics and instincts of both, with himself as secretary general and sovereign, as indispensable as the country itself was exceptional.”

This makes Myers’s choice for a title slightly odd, as the comparison between Putin and the historical tsars is only briefly touched upon in the book, raising expectations that remain largely unfulfilled. True, a title like The New Secretary General is far less pithy, but it would better reflect Myers’s characterization of Putin. It conjures images of the cults of personality, the control of dissent and careful manipulation of public opinion, and the chauvinism which characterized the later years of the Soviet Union. Tsarist-era sovereigns did utilize censorship and political persecution, but Putin can be more closely tied to the Soviet Union, and it is clear from Myers’s biography that Putin has internalized and adopted certain tactics from this era for his own use. Though Putin has aligned himself closely with the Russian Orthodox Church—a nod to the tsarist-era confluence of church and state—he is primarily interested in the promotion of whichever values serve his own ends and is by no means a religious figure.

Those distinctions aside, there is much to be gleaned from The New Tsar. Myers provides a comprehensive, albeit occasionally dense, account of Putin’s life. Unlike many biographers who are hell-bent on drawing explicit connections between current behaviors and past experiences, Myers refrains from a Freudian over-analysis of Putin’s psychological profile, focusing little on his family and personal life and more on the arc of his career. A few important themes present themselves clearly and consistently throughout Myers’s work—the tendency toward policy driven by personal vendettas, the importance of loyalty, the lifelong struggle to overcome inadequacy, and the continuity of Putin’s questionable political machinations, including consolidation of power and elimination of dissent. Because The New Tsar is organized chronologically, a division into themes is not particularly natural, but Myers could have placed more emphasis on the continuity of Putin’s life, and perhaps been clearer about the thesis toward the beginning of the book to enable the reader to form a clearer picture of his argument.