Post-War Syria: The Next Big Crisis Between Russia and America? 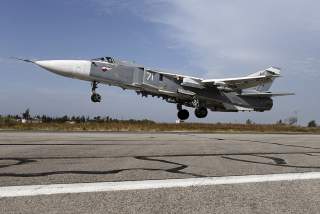 Two years before the final defeat of Adolf Hitler—at a time when German armies still occupied a significant portion of the European part of the USSR and Festung Europa seemed to be impenetrable to the Western Allies—Franklin D. Roosevelt, Winston Churchill and Josef Stalin had already begun discussions about the fate of postwar Europe. Even when the ultimate victory still seemed to be in doubt, the Allies had started to assign zones and reconstitute borders.

What is surprising is that, when it comes to the final defeat of the Islamic State in both Syria and Iraq—the elimination of the so-called caliphate as a discrete physical, geographic entity—the all-important discussions about the future that should have been taking place among all the stakeholders were repeatedly postponed. The Kurdish crisis is but the first serious manifestation of the problems at hand because critical questions about “the day after” were not answered. More seriously is the continued prospect of a clash between the two main coalitions—one led by the United States, the other by Russia—over the disposition of a post-IS Syria.

During the Obama administration, the hope was that Russia, as the principal backer of the Bashar al-Assad regime, would come to the realization that Assad would need to be abandoned in order to fulfill the U.S. prerequisite that “Assad must go”—and that Moscow would somehow cajole or compel Iran to accept this reality as well. The United States would then be able to convene a process that would create a broad-based opposition government for Syria. This aspiration ran up against two hard realities. The first was the willingness of Iran and Russia to commit hard power assets into the fight in Syria and be willing to absorb losses to defend the regime. The second was the inability of the United States to create an effective opposition force that could take the fight to Assad without requiring U.S. ground troops in large numbers—forcing Washington to delegate more of its policy objectives to the fighting strength of the Syrian Kurds—with all of the risks that this entailed in derailing relations with Turkey.

Moscow also proved to be more adept at multilateral diplomacy than the United States expected. Building on Turkish anxieties about U.S. military aid to the Kurds, and engaging in realpolitik bargaining with the Gulf Arab emirates and Saudi Arabia, Russia gained support for its preferred solution: maintenance of Assad as the formal head of Syria (with his regime maintaining control of key parts of the country) but the development of effective spheres of influence (under the moniker of “deconfliction zones”) whereby key patrons of the Syrian opposition, starting with Turkey, could secure their interests and provide safe spaces for their supporters. The “Astana Process” (named for the capital of Kazakhstan where Turkish, Iranian and Russian co-conveners meet with both Syrian government and opposition players) has had some success, but the United States has never signed onto it as the preferred model for settling the future of Syria, and other key players in the region—especially Israel, but also Saudi Arabia—have reservations about it.

As the Islamic State gives up the metaphorical ghost on the last bits of territory it controls, this Russian approach is now facing some serious tests. First and foremost is the fate of Deir al-Zour province, the center of Syria’s oil industry. Who will control these critical assets—the Syrian government, backed by Russian airpower, or the Syrian opposition forces, backed by U.S. military assistance? In government hands, these oil fields will return critical revenues to the coffers of the regime in Damascus, but if held by the opposition, they will help strengthen their negotiating position. Both the Russian and U.S. militaries are said to be in constant contact to prevent any clashes between their allies, personnel on the ground and their assets in the air—but accidents can always happen.

The second test is, as the Syrian government begins to retake key border posts along the Iraqi frontier, the question of Iran’s “corridor to the Mediterranean.” A key strategic objective for Tehran in committing the ground forces of the Revolutionary Guards to the fight in Syria was to preserve the land bridge that connects Iran through Iraq, through Shia and Alawi areas in Syria, to Hezbollah in Lebanon. This has been a critical supply line for the Revolutionary Guards to resupply Hezbollah—and one reason that Israel has launched strikes to destroy convoys bound for Lebanon in recent years. Given the shift in the Trump administration’s policy toward Iran—away from the Obama-era effort at accommodation towards a more confrontational position—preventing the consolidation of that corridor will be a high strategic priority. But either attempting to block Syrian forces (and especially the Iranian units embedded in the regime’s forces) or to insert opposition troops into position again runs the risk of an accidental clash with the Russians.

Finally, there is the ultimate fate of Assad himself. The Trump administration has never formally repudiated the position that “Assad must go” even if it has suggested that Assad’s immediate departure is not an absolute precondition for talks on Syria’s future. But Moscow seems to have made up its mind that the question is settled: Assad will remain as the president of Syria. On Tuesday, Russia vetoed the extension of the mandate of the United Nations investigation into the use of chemical weapons in Syria, suggesting that Moscow considers the matter closed and no longer subject to inquiry. From the U.S. perspective, however, Assad’s potential continued possession and use of such weapons poses a threat—and suggests that even after the Islamic State is eliminated as a holder of Syrian territory, Washington will not consider the Syrian civil war to be over and settled. For Russia, which has staked out a position that its intervention is largely completed, continued American involvement not only prevents a withdrawal of Russian forces and a shifting of military resources to other problems, but keeps Syria as a zone of potential conflict with the United States.

The Islamic State is now said to control less than five percent of Syria’s territory. But with that common threat to both Russia and the United States eliminated, the prospects for increased confrontation will be heightened.

Image: A Sukhoi Su-24 fighter jet takes off from the Hmeymim air base near Latakia, Syria, in this handout photograph released by Russia's Defence Ministry on October 22, 2015. REUTERS/Ministry of Defence of the Russian Federation/Handout via Reuters