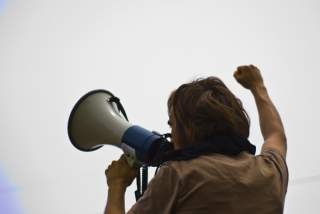 TODAY, AMERICAN diplomatic compounds around the world resemble armed bunkers, resting behind higher and higher walls, literally and figuratively, than ever before. After the tragic 2012 attack on the U.S. consulate in Benghazi in which Ambassador J. Christopher Stevens was killed, politicized criticisms of how he perished led to calls for fortress diplomacy. Whatever intelligence or operational failures occurred in Benghazi, a clear-eyed view of the tragedy would recognize that Stevens was doing precisely what American diplomats must—talking with local players. Stevens clearly understood that his mission required him to talk to Libyans, to venture beyond the high-walled safety of the embassy.

In fact, lowering the metaphorical walls guarding U.S. diplomacy by developing a strategy of engagement with civil society is overdue. “America must always lead on the world stage,” President Barack Obama stated at West Point in May 2014. “U.S. military action cannot be the only—or even primary—component of our leadership in every instance.” He went on to allude to soft-power tools, arguing that the United States forms alliances “not just with governments, but also with ordinary people.”

Civil society–focused diplomacy offers good value. Enlarging the space for civil society can catalyze change at a minute fraction of the cost the United States pays to maintain its military dominance. It also aligns with U.S. values, since aiding civil society is a way for the United States to bolster universal human rights and cultivate democratic aspirations. It is good for America’s image in the world—scenes of former secretary of state Hillary Clinton meeting with Afghan women leaders, holding roundtables with Burmese activists and dancing with Malawian farmers have helped restore America’s reputation as a force for good. Above all, it can serve a dynamic understanding of U.S. interests by anticipating and, where possible, influencing shifts in countries’ leadership.

The Obama administration launched its “Stand with Civil Society” initiative in late 2013, but it has yet to satisfactorily articulate or implement a detailed vision for what such a “societal diplomacy” should involve. What does such person-to-person diplomacy entail in practice? What can it achieve? And what happens when societal diplomacy comes into tension with traditional government-to-government diplomacy?

THE IDEA of “societal diplomacy” is a simple one—it rests on the notion that America’s international relations need not be limited to other sovereign governments. Rather, the U.S. government must engage and build relationships with civil society, which encompasses the broad general public, political activists and human-rights defenders, the legal community, businesses, academics and independent media. Washington should, moreover, aim to liberalize governments and protect civil society’s agency.

The first major goal of societal diplomacy is to carve out space for civil society worldwide, especially in countries where illiberal governments are seeking to monitor and shrink the space for civil society to dissent, resist and rally for reform. Openness and free expression facilitate reform and innovation, which, in turn, spur economic development and prosperity. An empowered citizenry may also be more likely to question going to war, which incentivizes more peaceful and cooperative behavior among states.

Second, societal diplomacy would serve to further U.S. interests by hedging its bets on who will wield power in the future in a given country and enhancing its legitimacy by matching rhetoric about democracy with deeds. The United States can gain flexibility in responding to unpredictable outcomes in countries where current power arrangements may not hold. America should expand its notion of what defines a foreign partner to include liberal opposition actors in order to build relationships that will outlast brittle autocracies. By nurturing relationships with democratic activists and community leaders, the United States can position itself on the “right side of history,” the term Obama so hesitantly used in reference to Egyptians calling for democratic change in 2011.

Finally, societal diplomacy would have positive ramifications for the United States’ legitimacy as a global leader. Popular acceptance of American global leadership has declined over the last decade. According to the Pew Research Center’s Global Attitudes Project, foreign countries’ confidence in the ability of the American president to “do the right thing regarding global affairs” was dismal during the George W. Bush presidency (in 2005 and 2006, there was not a single nation in which over 75 percent of its population expressed confidence), and has declined throughout the course of the Obama presidency after an initial spike. In acting unilaterally to invade Iraq on a false pretext, violating international human-rights standards at Guantánamo Bay, and instituting a legally and ethically dubious targeted-killing program against suspected terrorists, the United States has lost some of the moral authority that it once claimed as the leader of the free world.

Rebuilding a positive image on the world stage requires winning back the trust of not only allied governments but also people around the world. Supporting liberal activists or NGOs in the Middle East now, for example, can help counter the damage done by decades of U.S. support for authoritarian leaders in Egypt, Tunisia and elsewhere. Supporting civil society throughout East Asia is equally important—from Hong Kong residents demanding direct democracy, to repressed dissenters and worshippers elsewhere in China, to those jailed after the coup in Thailand, to NGOs still marginalized in Myanmar. By lending soft-power resources to strengthen civil society around the world (for example, expertise and training, monetary support, and the time and attention of its diplomats), the United States can chip away at the false idea that its goal is to spread democracy by force—and the well-founded suspicion that its support for democratization is self-servingly selective in practice.

THE PRIMARY tactics of societal engagement are twofold: talking and acting. Washington-based diplomats on travel or those on the ground must meet meaningfully with civil-society actors—if such meetings do not compromise the latter’s safety, agency or reputation. From the outset, a diplomat must signal an intention of being there for civil society as much as or more than for the authorities. Our diplomacy should actively prioritize nonviolent civil-society resistance to illiberal rule. For example, in April 2005, Secretary of State Condoleezza Rice met with opposition parties and civil-society leaders from Belarus in Vilnius. In doing so, she showed solidarity against President Aleksandr Lukashenko and boosted that solidarity by conducting the meeting along with the European Union’s foreign-policy chief and the sitting Lithuanian foreign minister. Coupled with targeted economic sanctions on Lukashenko’s senior leadership, such highly visible diplomacy put the United States clearly behind preserving space for civil-society leaders.

Shedding post-9/11 “fortress diplomacy,” diplomats abroad should also dispatch more gritty, candid reporting by cable to Washington on civil society, vividly demonstrating the value of engaging it to decision-making readers. In this and other ways, the State Department would be wise to reconceptualize what it means to be a successful diplomat, incorporating employees’ intensity and success in interaction with civil society into standards and benchmarks for career advancement.

Traditional notions of soft power, most notably in Joseph Nye’s writing on the topic, overemphasize popular culture’s import. The dissemination of popular culture to the public of the country in question can be left to the private sector (the Internet, television, film, video games and other industries). With finite resources, in a division of labor, the U.S. government can leave private channels to disseminate cultural messages, while societal diplomacy today must prioritize actually enlarging the space of NGOs, democrats, artists and writers to express themselves.

Often the United States has succeeded in engaging and strengthening civil society because circumstances were propitious. But in order for societal diplomacy to be a cornerstone for U.S. foreign policy, it must also be put into practice where political circumstances are less opportune. What would societal diplomacy entail in practice in two cases chosen precisely because they would pose quite serious obstacles for U.S. policy implementation: China and Saudi Arabia?

AS CHINA emerges as an economic, military and diplomatic power, a credible case could be made that a larger voice for civil society and political liberalization could make the Chinese state more of the “responsible stakeholder” Robert Zoellick encouraged as U.S. deputy secretary of state, and restrain aggressive moves, such as in South China Sea territorial disputes. Even so, China is and will continue to be a thorny case. Beijing’s opposition to political dissent and to external backing of civil-society actors is pronounced. Engaging independent reformers therefore risks increased bilateral friction. Yet only engaging civil-society elements approved by the government risks limiting dialogue to groups established by or beholden to the state.

Funding levels for overall U.S. assistance programs in China have contracted in recent years; it’s very difficult to justify development assistance to an economic powerhouse and to demonstrate that such assistance does not simply underwrite the autocracy’s legitimacy. The remaining aid emphasizes dialogue on effective rule of law on terms acceptable to Chinese authorities and consistent with use by the state as an instrument of power. Some modest assistance to civil-society groups has, however, been disbursed by the Department of State’s Bureau of Democracy, Human Rights, and Labor without publicly identifying grantees, and by the National Endowment for Democracy more overtly (roughly $6–8 million each year since 2007 for internal groups and some in exile).