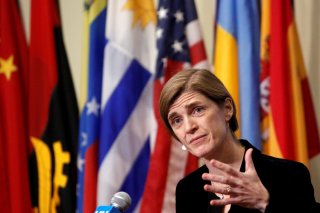 Echoing Joan Didion’s celebrated line, “We tell ourselves stories in order to live,” Power writes in her introduction that, “We make sense of our lives through stories.” It is a revealing moment. For at best, both Didion’s and Power’s formulations occlude as much as they clarify. That is because not all of the stories we tell ourselves are true, and in Power’s case the stories she tells herself and now retails to her readers more often than not are prophylactics against understanding. Repeating that the United States is the world’s greatest nation when it has the lowest social mobility of any developed country, or that it is a leader in human dignity when it has the highest incarceration rates in the world and is the only OECD country besides Japan and South Korea to have the death penalty, not to mention an undemocratic system for electing presidents and politics hopelessly corrupted by money—all phenomena that long predate Donald Trump’s presidency (Power belongs proudly to the “Trump is an aberration” school)—is absurd. And saying that America has nothing to apologize for is to enter the realm of fantasy.

At one point, as she discusses her abiding grief for a small child named Toussaint who was struck and killed by one of the cars in her motorcade during a visit she made to Cameroon, Chad, and Nigeria so that she could observe firsthand the fight these countries were waging against the Boko Haram jihadists, Power concedes that “Toussaint’s death forced me to more directly confront a charge often made against the United States—that even when we try to do right, we invariably end up making situations worse.” But as it turns out, Power soon concludes that far from doing more harm than good, there is a way to look at what took place in a more hopeful light. “Although my sense of responsibility for the accident would never abate,” she writes, “I began to take pride in what our delegation had tried to accomplish.” After all, “being a public servant requires making decisions every day—decisions that can have unintended outcomes, even life and death consequences.” And then, astonishingly, Power adds: “After the accident, people in the region had gone out of their way to thank us for being there.” In human terms, it’s a disgraceful evasion: merely writing as she does shows that Power’s sense of responsibility has indeed “abated.” All that’s missing are the balloons and the “proud to be collateral damage” buttons.

THE GRAHAM Greene of The Quiet American—that is, the Greene at his most contemptuous of America’s love affair with its own innocence—could not have come up with such a damning illustration either of American moral preening or of American callowness. And while Power claims that while “the road to hell is paved with good intentions … turning a blind eye to the toughest problems in the world is a guaranteed shortcut to the same destination,” she is forced to concede, though only in a footnote, that “progress against Boko Haram has been uneven since [her visit] in 2016.”

Elsewhere, Power writes of “the need for humility about one’s judgments.” But her account of her efforts while at the UN to establish personal ties with as many of her fellow UN permanent representatives as possible is everything except humble. On the contrary, the portrait she draws of herself bears an alarming resemblance to the caricatural Lady Bountiful in the Restoration drama, The Beaux’ Stratagem, devoting herself to the betterment of her less fortunate neighbors. She recalls:

“My personal relationships [with them helped] turn ambassadors into advocates for our causes. And it was a two-way street. They introduced me to challenges their countries were facing that I would not have known about otherwise. This information allowed me to reach out to my colleagues at the State Department to see if the United States could be doing more to lend a hand.”

Again we are back in Quiet American country and Greene’s line about Aiden Pyle, the eponymous American of the book’s title, that “I never knew a man who had better motives for all the trouble he caused.”

Like Pyle, Power’s good intentions are not at issue. But like so many well-meaning servants of the Pax Americana before her, Power profoundly misunderstands her own role. Cicero wrote of Cato that he “gives his opinion as if he were in Plato’s Republic, not in Romulus’ cesspool,” and that is Power’s error as well. For when she writes extensively about America’s successes and failures but never of America’s crimes and complicity in crimes, she is engaged in an exercise in idolatry, and idolatry of a particularly exasperating and mediocre kind: self-idolatry. Power is well aware of the dangers of imperial overreach, but she writes as though she remains insensible to the dangers of imperialism itself. This, it seems, is what passes for idealism in the Washington policy establishment these days.

David Rieff is the author of At the Point of a Gun: Democratic Dreams and Armed Intervention; The Reproach of Hunger: Food, Justice and Money in the Twenty-First Century; and, most recently, In Praise of Forgetting: Historical Memory and Its Ironies.