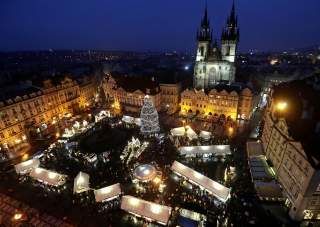 Visiting Prague, the City of a Thousand Spires, feels like an intense walk through an encyclopedia of European culture and history: its architecture, the music of Mozart, Smetana and Dvorak, Kafka’s literature, and certainly Europe’s political tragedies of the twentieth century. Prague is one of Europe’s most popular travel destinations. As a UNESCO World Heritage site, Prague has the continent’s best-preserved stock of buildings from the 14th to the 18th centuries. The magnificent city survived World War II relatively unscathed. This recent visitor seeks to trace some poignant sites symbolizing Czechoslovakia’s political past, its fall-out impacting the rest of Europe, indeed the world.

The dominant site in Prague is the towering castle with adjacent St. Vitus Cathedral. While making one’s way across the tourist-crowded Charles Bridge spanning the River Vltava, the magnificent view of the castle triggers one’s recall of history. In 1918, the castle became the seat of the president of the new Czechoslovak Republic, T.G. Masaryk. The Austro-Hungarian Empire had collapsed at the end of World War I. For Checks and Slovaks, their founding father Masaryk is regarded analogous to George Washington in the United States. The Treaty of Versailles recognized the independence of Czechoslovakia, with a population that included three million German-speaking people, 24 percent of the total population of the country.

The Munich Agreement—or “Munich Betrayal”—opened the gates for Hitler’s occupation of Prague, conceding the German-speaking Sudetenland region of Czechoslovakia to Germany. “Munich” is widely regarded as shameful, as a cowardice act of appeasement. British prime minister Neville Chamberlain declared that the Munich agreement meant “peace for our time.” In September 2013, U.S. Secretary of State, John Kerry, trying to rally international support for military intervention in Syria for President Bashar al-Assad’s violation of President Barack Obama’s red line, said “this was our Munich moment.” What have we learned, if anything?

The annexation of the Sudetenland began on October 1, 1938, and left the rest of Czechoslovakia weak. It became powerless to resist subsequent occupation. On March 15, 1939, the German Wehrmacht moved into the remainder of Czechoslovakia and, from Prague Castle, Hitler proclaimed the Protectorate of Bohemia and Moravia. He spent a night in the Prague Castle which became the headquarters of SS-Obergruppenführer Reinhard Heydrich, the Reich Protector of Bohemia and Moravia. Heydrich was a key organizer of the genocide of the Jewish communities in occupied Europe, including Prague. Less than a year after assuming power, in May 1942, Heydrich was ambushed by British-trained Slovak and Czech resistance soldiers while on his way to the Castle and died of his wounds a week later.

The impact of communism is omnipresent in the city’s presence. Even the Lonely Planet guide encourages a visit to the “Museum of Communism.” The guide states, “It’s difficult to think of a more ironic site for a museum of communism – in an 18th-century aristocrat’s palace, between a casino on one side and a McDonald’s on the other. Put together by an American expat and his Czech partner, the museum tells the story of Czechoslovakia’s years behind the Iron Curtain in photos, words and a fascinating and varied collection of…well, stuff.” Reminding the visitor of private museums at Checkpoint Charlie in Berlin, the Prague museum of communism conveys a stark message. The museum tells how the totalitarian regime after 1948 until the Velvet Revolution in 1989 suffocated human freedom, arrested individual initiative, and lead many citizens to resignation, opportunism, and even collaboration.

The Prague Spring of 1968 was led by Communist party leader Alexander Dubcek to liberalize Communist rule and construct “socialism with a human face.” That movement was crushed by Soviet leader Leonid Brezhnev who ordered 300,000 Warsaw Pact troops to invade Czechoslovakia on August 21. Dubcek remained a devoted Communist and intended to preserve the party’s rule. However, he and other reform-minded Communists sought to win popular support for the Communist government by eliminating its worst, most repressive features, allowing greater freedom of expression and tolerating political and social organizations not under Communist control. What followed was a rebirth of political and cultural freedom long denied by party leaders loyal to Moscow. The free press flourished, and artists and writers spoke their minds. But the Brezhnev regime viewed the Prague Spring as a virus, fearing it could spread and infect other nations in Moscow’s orbit, and brutally stamped it out. Within a year, resistance faded, Dubček was removed from office, his reforms were undone, and a Soviet-controlled government was installed. Czech sources report 137 Czechs and Slovaks died as a result of the Soviet-led invasion of Czechoslovakia in 1968.

If last year’s fifty year remembrance of the Prague Spring gave reason to reflect on the feasibility of a “socialism with a human face,” strongly denied at the time by Vaclav Havel. Also, this January reminds us of another human fate: the self-immolation of Jan Palach, a 21 year old student, on January 16, 1969 on Wenceslas Square in Central Prague. Two memorials on site provide a grim reminder for the visitor.

Alarmed by a letter Palach had written, the communist regime suspected additional members of a resistance organization were going to burn themselves—until their demands were met. Palach’s demands declared in the letter were the abolition of censorship and a stop to the distribution of Zprávy, a Soviet propaganda pamphlet. In addition, he called for all citizens to start a general strike in support of these demands.

MD Jaroslava Moserová, the first to provide care to Palach at the Charles University Faculty Hospital, later stated: “It was not so much in opposition to the Soviet occupation, but the demoralization which was setting in, that people were not only giving up, but giving in. And he wanted to stop that demoralization. I think the people in the street, the multitude of people in the street, silent, with sad eyes, serious faces, which when you looked at those people you understood that everyone understands, that all the decent people were on the verge of making compromises.”

Palach’s funeral on January 19, 1969 was attended by more than 50,000 fellow citizens. Palach was initially interred in Olšany Cemetery. As his grave was growing into a national shrine, the Czechoslovak government attempted to extinguish all memory of Palach’s death and exhumed his remains in October 1973. His body was cremated and sent to Palach’s native town of Všetaty. In post-communist Czechoslovakia—after the “Velvet Revolution”—Palach’s urn was returned in October 1990 to its initial site in Prague.

Fifty years after Palach’s death, his posthumous recognition is as wide and diverse as ever. Movies, TV series, poems and novels, lyrics of rock band songs together with streets and plazas named after him keep his memory alive. Czech Ambassador Jaroslav Kurfürst with Trade Councillor Martin Čech laid flowers to Jan Palach’s memorial in Brussels to commemorate Jan Palach remembrance Day. The Czech Center in Paris will present, from January 16 to March 2, 2019, a photographic exhibition entitled “Aznavour in Prague / Farewell to Jan Palach.” Radio Free Europe / Radio Liberty remembers Jan Palach with a photo documentary under the heading “Fifty Years After His Self-Immolation, Czech Student Jan Palach Remains A Symbol Of Defiance.”