President Moon: Be a Facilitator, Not a Mediator 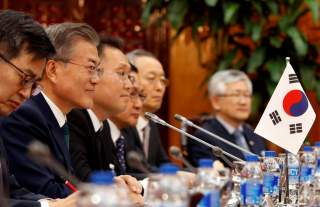 Time is ticking for South Korea’s President Moon Jae-in. Expectations are high for a major breakthrough for denuclearization at the inter-Korean summit on April 27 as it directly affects the upcoming summit between U.S. President Donald Trump and North Korean Chairman Kim Jong-un.

The importance and expectations for Trump-Kim summit may top the April summit. As the two leaders in Pyongyang and Washington are both unpredictable, they can not only make a historical summit come true, but might also revert to military options. If the two summits fail to meet the anticipated high expectations, Trump may opt to use military strikes, while Kim may decide to undertake more nuclear and missile tests as he walks away from the summit.

The Blue House stressed that Seoul will be a “mediator” between Pyongyang and Washington in these upcoming denuclearization talks. However, a mediator usually does not have deep relations with nor complex interests in either party.

Given this complication, Moon should not assume this role. He is not a distant bystander; North Korean nuclear and conventional missiles can and sometimes are pointed towards Seoul. Even though Pyongyang often issues assurances that its nuclear weapons do not target the South, Seoul has no incentive to trust a regime that fired twenty-three missiles last year. North Korea has regularly threatened South Korea throughout its existence and continues to do so.

Moon’s purported desire to be a mediator faces daunting hurdles. The United States wants a package deal as quickly as possible, while North Korea wants a phased negotiation process. Moreover, figuring out a solution to satisfy both nations is an arduous task since Trump and Kim are drawn to maximalist options.

But the pressure of time may help matters. With the U.S. midterm election in November approaching, Trump might attempt to push forward the deal to secure a potential denuclearization resolution. For Kim, lengthening the negotiation can give him time to gain benefits in the near term, putting off the long-term goal of the talks. But Kim also needs an economic agreement relatively early in the prolonged negotiation process to be able to loosen the sanctions regime and perhaps draw in other forms of compensation.

What can South Korea do? Moon should be a facilitator who plays an active role in convincing North Korea to move towards denuclearization by aligning South Korea’s policy with the United States while simultaneously not neglecting South Korea’s core national security interests. This is a fine line to walk, and the first step as a bona fide facilitator will be at the inter-Korean summit.

On April 27, Moon needs to convince Kim to be flexible in his dealings with Washington a month later. For example, if Moon finds that Kim wants a U.S. troop withdrawal in exchange for complete denuclearization, he should be able to convince Kim to consider reduced joint exercises instead, emphasizing that the withdrawal might harm the security of the Korean peninsula. At the same time, Moon needs to assure Trump that the search for such flexibility of North Korea will not dilute Washington’s goal of complete denuclearization.

Moon also needs to firmly align South Korea’s policy with the United States to guarantee denuclearization through regular inspections and avoid drawn-out negotiations. As an isolated state, North Korea’s bedrock requirement is the Kim regime’s survival. Pyongyang will seek a prolonged negotiation as an opportunity to shift the focus from denuclearization to other matters while cultivating the image of a normal regime. Even if Kim seems to possess a new friendly demeanor due to the two countries’ camaraderie at the Olympics and the recent South Korean art troupe concert in the North, Seoul should not be distracted by the sudden overtures. America remains the vital ally for South Korea’s national security.

After the April summit, Moon needs to continue to support Washington’s call for retaining maximum pressure until complete denuclearization has been attained. But if the United States and North Korea reach an agreement that undermines or contravenes South Korean interests, such as U.S. troop withdrawal, Moon should claim the right to veto the agreement. Close friends and close allies can disagree without breaking their friendship: any pursuit of a peace treaty or normalization of relations between Washington and Pyongyang cannot come at the expense of putting South Korea’s national security at risk. As an effective facilitator, Moon should declare that the withdrawal of U.S. forces from South Korea is non-negotiable. Such an active role will give the United States and other allies the flexibility to strike a genuine deal.

Finally, Moon should comport himself in a respectful and flexible manner. Moon needs to secure a resolution from North Korea to meet with the United States and moves towards complete denuclearization in order for the Trump-Kim summit to be successfully held.

Jiwon Yang is a Research Intern with the East Asia Program at the Stimson Center and an Asan Academy Young Fellow.