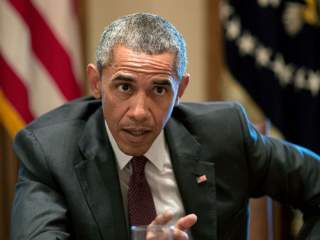 The political scientist V.O. Key once wrote that “latent” public opinion is the only type of public opinion that government officials truly care about. Politicians do not cater to audiences in the here and now, he suggested, but rather are focused on engineering positive endorsements of their policies among people in the future. Indeed, leaders are quite willing to tolerate poor approval ratings because there is always a hope—an expectation, even—that posterity will bring absolution.

Given his standing in the polls, President Barack Obama can probably be counted among those politicians who have put their faith in vindication by future generations. But Obama will have to wait a long time before anything close to a unanimous verdict on his legacy can emerge—let alone a positive one. This is especially true in the realm of foreign affairs, where Obama’s agenda has been thoroughly partisan and divisive—pleasing to Democrats but anathema to Republicans.

When it comes to Obama’s record on foreign policy, Republicans smell blood. Indeed, it has been a staple for the party’s presidential hopefuls to accuse Obama of weakness on national security, with his failure to “defeat” the Islamic State, the resurgence of Russia as a bona fide power on the world stage, the nuclear deal with Iran—along with the attendant worsening of relations with Israel—and the looming rise of China being among the most common lines of attack.

Earlier this month, the Republican presidential debate in South Carolina offered a window into how the party is using foreign policy to sully Obama and the Democrats. Riled up over the seizure of U.S. sailors by Iran two days prior, the assembled GOP contenders fell over themselves to castigate the president for allowing the country and members of its armed forces to be humiliated by a sworn adversary.

Ted Cruz led the charge. “I give you my word,” he declared, “[that] if I am elected president, no serviceman or servicewoman will be forced to be on their knees in any nation that captures our fighting men and women. We’ll field the full force and fury of the United States of America.”

The detainees had already been released by the time this grandstanding took place. And the truth is that the sailors had only been held by Iran’s forces because they had wrongly strayed into Iranian waters. More sober critics of President Obama were probably correct to avoid politicizing the issue; Nikki Haley, for example, wisely declined to invoke the crisis in her response to the president’s State of the Union.

Yet the overreaction of the GOP’s presidential candidates showed just how eager they are during this electoral cycle to weaponize the perception that Obama is weak on national security. What mattered to them were not the facts—that this was, in sum, a very minor encounter and certainly not a military crisis—but rather the political potential to make foreign policy a winning issue for the Republican Party come November.

Listening to the Republicans, one would be forgiven for thinking that Obama’s entire foreign policy has been an unmitigated disaster from start to finish. The Middle East is in flames, and only carpet bombing and U.S. boots on the ground can save it; Vladimir Putin has become such a threat to U.S. interests that it is now worth shooting down his planes over Syria; and world leaders from Tehran to Beijing to Mexico City spend their days guffawing over American stupidity.

But this is not how everybody in domestic politics views Obama’s record on international issues, of course. On the contrary, loyal members of the president’s electoral coalition have solid reasons to judge his tenure in the White House as an incredible success story.

After all, what Republicans denounce as weakness—namely, Obama’s reluctance to use U.S. military power abroad—is actually a major strength in the eyes of many Democrats. Obama secured the Democratic nomination and won the 2008 election partly on the back of his pledge to wind down the deeply unpopular war in Iraq. And if anything, the Democratic coalition seems to have grown more anti-war over the course of the Obama presidency, not less.

Initially a proponent of ramping up the military effort in Afghanistan, for example, President Obama was encouraged early in his first term—not least of all by electoral concerns—to reduce the U.S. footprint in that country, as well as in Iraq. Especially after the killing of Osama bin Laden, Obama shifted his focus from defeating America’s enemies in battle to ending a decade of warfare in the Middle East.

The wisdom of retrenchment in Iraq and Afghanistan is open to debate, of course, given the worsening security situation in both countries. But the goal of extricating the United States from foreign wars remains in vogue among Democrats.

So does avoiding future wars. Consider John Kerry’s remarks in response to Iran’s implementation of the controversial nuclear deal. “I think we have also proven once again why diplomacy has to always be our first choice, and war our last resort,” he said. “And that is a very important lesson to reinforce. We have approached this challenge with the firm belief that exhausting diplomacy before choosing war is an imperative. And we believe that today marks the benefits of that choice.”

The implicit claim is that, under a different president, the United States could well have found itself embroiled in open warfare with Iran. But thanks to Obama’s steady hand and strategic foresight, diplomacy has proven sufficient to meet the objectives of keeping America safe and maintaining security in the Persian Gulf. Diplomacy pays. Militarism does not.

Diplomacy is also bearing fruit in Cuba, Obama’s supporters might say. Tough talk, economic blockade and the assassination plots of yesteryear have done nothing to advance the U.S. goal of regime change in Havana. In stark contrast, Obama’s approach brings new hope that the two countries can mend their bilateral relations and that, in time, the Cuban government will either reform or be replaced by its own people.

Elsewhere, too, diplomacy appears to have paid dividends. Although it has a much lower profile in U.S. domestic politics than the attempted rapprochements with Iran and Cuba, for example, Obama’s opening to Burma has seen that country edge towards democratization and an improvement of its human rights record (even if Obama’s support for democratic reforms in other countries—Egypt and Bahrain spring to mind—has been mixed).

On the environment—a central issue for many in the Democratic coalition—Obama can claim to have delivered the Paris Agreement on tackling climate change, a marked improvement on previous global compacts, as well as ensuring that China plays its part in curbing carbon emissions. He has done so in the teeth of bitter Republican opposition, of course, which makes his legacy on the environment particularly vulnerable to partisan disagreement.

And then there is the question of American leadership of the global economy under the Obama administration. It is sometimes easy to forget just how fragile things were in January 2009 when Obama first took office, but it is surely a non-trivial achievement that, seven years later, an open world economy has survived relatively intact, with most major world powers having eschewed the sort of beggar-thy-neighbor economic policies that characterized the interwar period.

It is clear, then, that the Obama foreign policy has given groups within the Democratic coalition plenty to be happy about: diplomatic solutions that have reduced reliance on militarism, the promise of improved relations with some longstanding adversaries and achievements in the realms of climate, human rights and trade. And indeed, Democrats are much more likely to rate Obama favorably as a world leader.

The cost of these achievements has been to reject the militarist and macho brand of foreign policy that plays well with hawkish voters, the result being that Obama has little chance of being remembered as a strong commander-in-chief. He will have to live with his detractors’ attempts to blame him for turmoil in Iraq, Syria, Afghanistan and elsewhere; his legacy will long be tarnished by accusations of weakness, appeasement and misplaced priorities.

In his new book, The Obama Doctrine, Colin Dueck notes that President Obama achieved a very rare thing during the 2012 presidential election by turning foreign policy into a “winning issue” for the Democrats. An aggressive foreign policy of targeting terrorists that culminated in the death of bin Laden, a new start with some of America’s former adversaries and a seemingly imminent end to the wars in Afghanistan and Iraq—all of these things made it hard for Mitt Romney to land punches on the sitting president when it came to foreign affairs.

But this was a fleeting moment. Just four years later, foreign policy is back to being a highly politicized and utterly partisan issue. Worse still for Obama and his co-partisans, foreign policy is now an area that Democrats are decidedly vulnerable over, especially given sustained Republican attacks on Hillary Clinton’s record as Secretary of State.

And so while Obama (like his predecessor before him) might well view posterity as some sort of coconspirator—a source of ultimate validation and vindication for foreign policies not appreciated in their time—his would-be successors in the Democratic Party can enjoy no such luxury. Future public opinion is the least of their worries.